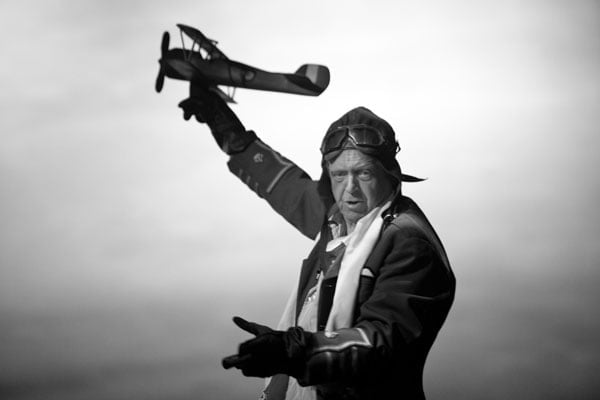 On until August 29
The Young Centre – 55 Mill Street

Although it’s been over 30 years since Billy Bishop Goes to War debuted in 1978, the play continues to fit perfectly, delivering the timeless message of the bloody cost of survival. Written and composed by John Gray with actor Eric Peterson, the play is the story of Billy Bishop from Owen Sound, Ontario, who joins the Royal Air Force during World War I and goes on to become the most decorated Canadian of the war.

The play itself has become one of the most celebrated of Canadian theatrical productions, with a production on Broadway and a touring show that included London’s West End and the Edinburgh Festival.

Like a suit that has been altered regularly, this production has been tailored over the years so that it remains as sharp as the pleats on a uniform. The new production depicts Bishop (played with irascible perfection by Peterson) as an old man reflecting on his glory and the horror of war. At the beginning, a pyjama-clad Peterson is slumped in an armchair. As the play unfolds, he leaps to life, recounting nights in muddy trenches (before he joined the RAF) and friends lost to shell fire.

Peterson populates the stage with a host of vividly-drawn characters, from the simpering recruiting officer to the condescending English butler and the pouting French chanteuse. By turns he sashays, struts and soars, at one point standing on the piano to describe a frightening air battle.

Director Ted Dykstra has kept the pacing and physical comedy varied and fast enough to engage the audience right to the end.

Set design by Camellia Koo is minimal with just a few old trunks and a dressmaker’s dummy to hold the momentos on one side of the stage and John Gray’s vintage piano on the other.

The result is a more powerful production that allows the audience an intimacy without distraction from special effects. The emphasis is where it ought to be with strong writing and music to play to the imagination. Gray’s lyrics capture the naivete of the young recruits (we’re off the fight the Hun and it looks like lots of fun) and the music hall style of wartime entertainment.

Since the duo has been performing Billy Bishop for so long, the performance doesn’t seem as much rehearsed as second nature. It remains a parade-ready example of the finest in Canadian theatre, a great national story superbly told.