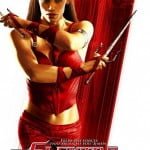 Elektra is one of those films that demand to be taken at face value. And when reviewing such a film it is incumbent on the reviewer to look at the film for what it is and evaluate it on that basis, not what the reviewer hoped it would be, what the reviewer thought it would be, but what it is. And then there is the all-important question of – did this movie deliver on its promise. And in the case of Elektra, I say it did.

Based on the dark and surreal Frank Miller graphic novel, Elektra: Assassin, this character and the actress playing her (Jennifer Garner), were first seen in last year’s Daredevil (another film that I thought was better than the bitchy critics would have you believe). Garner has shown herself to be more than capable of carrying herself well in the action genre – her TV show Alisa is an intelligently crafted weekly action tour de force and her work in Daredevil was also admirable.

But Elektra is not Daredevil – this character has a much deeper fracture in her psyche. I thought Garner was terrific in this role – just tough enough and just emotional enough to translate this comic book character into a fleshed out, multi-dimensional one. There are also nice little supporting performances from ER star Goran Visnjic (a fabulous Croatian actor whose best work is still ahead of him) and one of my favorite British actors of all time – Terence Stamp – in the role of the blind martial arts instructor Stick.

To quickly describe the plot (I generally hate reading reviews that contain a plot point by plot point description of the film as if the reviewer has to prove he actually saw it) – Elektra is a red leather clad, sai-swinging, modern day ninja assassin for hire. On one job she makes the unwitting mistake of getting to personally know the people who end up being her targets. So she is torn between her heart and her profession, but the two start to blend together as the layers are peeled back and more and more becomes known about the people she is involved in.

The movie was directed by a guy I know, not just in an interview sense, Rob Bowman (The X-Files) and I attended the inaugural Vancouver Molson Indy together and I have been on his sets and watched him work. I know him to be a director who thinks in terms of stylish visuals as a language unto itself to move a story forward. He does a terrific job with the styling of the film and with keeping the movie tight and to the point (coming in at a shade under 90 minutes) – but I wish he had done two things differently. One, Elektra’s signature is her revealing, ultra tight red leather outfit – I wish she had been seen in this signature outfit more in the film. Two, I really wish that the fight scenes had been staged much better than they were. They are often over-stylized to the point of being frustrating and confusing to watch. And there was really no reason for this because he had real martial artists involved (including the well-trained Jennifer Garner). Those are two minor quibbles with a movie that is overall very entertaining and exciting and interesting to watch. This movie is based on a comic book and it is the duty of the filmmakers to remain faithful to the graphic novel roots or what is the point of doing it all?

One of the things that I liked about the way the film was directed and acted, probably the central reason why I enjoyed it so much, was that it reminded me, in a weird kind of way, of the old Hammer Horror films from Britain in the 50s and 60s. Those films worked no matter how fantastic and outrageous the storylines were because the people on screen took the material seriously and played it seriously. If they believe it, it is much easier for us to believe it.

All in all, Elektra is a fun time at the movies – the violence is not overly graphic, there is no nudity and no profanity at all (an obvious restraint to maximize the audience through a friendly rating, and why the hell not, it is a comic book movie after all). I hope this film does well so we can see another Elektra adventure – it is an interesting character with an interesting talent playing her.