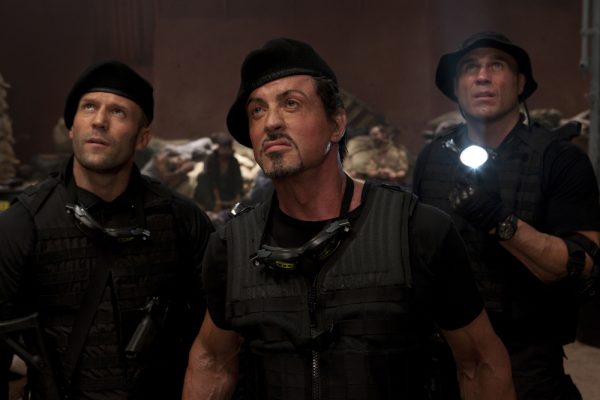 Jason Statham, Sylvester Stallone and Randy Couture in The Expendables

There’s a movie for just about everyone debuting this week in theatres. Julia Roberts stars in the romantic travel drama, Eat Pray Love; Sylvester Stallone and a cast of action heroes fight it out in The Expendables; and Michael Cera plays a would-be teenage hero in Scott Pilgrim vs. the World.

It’s one, big post card from some of the more interesting parts of the world, and director Ryan Murphy brings real heart to much of the story.

However, the film does feel a bit long winded. The early parts of the film which establish Elizabeth’s tale are interesting, and they do contribute to the story’s overall arc, but they are unquestionably what makes this film feel far too long.

As Elizabeth searches for herself you can’t help but think about the people who are able to find themselves right in their own back yards. Not many people can afford to fly the world for a year and then write a book about how they got back in touch with themselves, and as told here, it seems smug, self-absorbed, and little more than a girl fantasy.

Going into the film I didn’t know much of the plot, and I knew the story really didn’t matter — it’s one of those action films that you just accept will have a terrible plot and just needs the right excuses to let the heroes go in, kick butt, and pile up the corpses behind them.

The problem is that when you have a cast like this, you expect the characters to leap off the screen. The movie plot is almost unimportant — fans are going to turn out to see the stars, and bask in their bloody glory — but The Expendables just drops the guys on screen, and only Statham and Crews seem to get much opportunity to kick serious butt with real attitude.

That reason alone made me realize that Stallone never should have been allowed to direct this movie. Most of these guys are acceptable action stars, but they’re normally directed by people with actual directing abilities. Stallone directs himself and most of the action well enough, and his stunt coordinator obviously knew what they were doing, but Stallone fails to inspire his cast, and the script he co-wrote never gives them a chance to be all that clever. Li and Rourke get a few opportunities, I suppose, but none that really blew me away.

Even if you can ignore the mind-numbing dialogue and the recycled plot from the 80s, it’s hard to ignore that these guys are utter stiffs on screen. Without a strong director it’s like expecting bronze statues to emote if you film them long enough.

Add to that the problem that, while Stallone does look pretty good for his age, he also looks like a sausage that’s been squeezed too hard. He literally looks like if he hit a sharp corner he might burst out of his skin.

That wasn’t enough for me to enjoy The Expendables, so my vote is to skip it, and if you’re really feeling generous you can try it on DVD in a few months and fast forward through all the brain dead dialogue and get right to the mediocre action.

Michael Cera stars as the ubiquitous slacker and nerd, Scott Pilgrim, who falls for the very pretty Ramona Flowers, played by Mary Elizabeth Winstead, but has to defeat her seven evil exes before he can truly win her heart.

Set in Toronto, the film is essentially a postcard of the cooler side of the city, and it’s already earned impressive reviews from loads of critics.

“The film may baffle regular citizens (and migraine sufferers),” Peter Howell wrote in his review for the Toronto Star, “but it welcomes geeks of all ages and obsessions to its circus tent.”

And Robert Wilonsky of the Village Voice wrote, “Wright immerses his heroes in pop culture’s detritus and diversions, but doesn’t drown them in it. You don’t have to be dazzled or tickled by the movie, or get every joke, to be touched by it, too.”