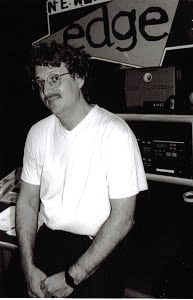 Alan Cross and the alternative music

Toronto’s Edge 102 is perhaps one of the more intelligent alternative stations you’ll ever get a chance to hear. Not only do they play some of Canada’s lesser known artists but they also feature “The History of New Rock” with Alan Cross.

If you haven’t heard him, Cross is practically an encyclopedia of information on the alternative music scene. Ask him about Nine Inch Nails or anyone like the Sex Pistols and he’ll probably be able to talk for hours.

Now you can get his wisdom condensed in his book 20th Century Rock and Roll, Alternative Rock.

What is the worst thing that has happened to music or to a band that really changed things?
“The herd mentality of the music industry. Once someone discovers something, everyone just piles on and beats it to death. We start off with a really vital band like Nirvana or Mud Honey or something like that and then a few sad steps later we have the Goo Goo Dolls. Good ideas in music, when the mainstream gets hold of it, are always beaten down to the lowest common denominator and that’s how we have the Goo Goo Dolls and Creed today.”

Who do you think are some of the most underrated bands around today?
“You have never heard of these guys and this is just based on one single. They’re a band from Los Angeles called Gordon. Great pop band. Just a brilliant, brilliant pop band. They had a song last fall called “Four To Five Grapes” from their self titled album. I also like Gay Dad, and I don’t know if they are underrated because it’s hard to say since we haven’t really seen them here.”

What’s the next thing that you want to tackle
“I’ve got some web site stuff that I want to handle yet and I want to write a novel. My agent wants 50 pages by the end of the summer.”

What kind of novel?
“It’s hard to say but it’s based on a story set in the Canadian prairies but I can only really do things a few months ahead of time since things change so quickly. I’d also like to try and pay off my mortgage in the next 8 to 10 years and get some money back.”

Where did you start writing?
“After having done the Ongoing History of New Music for two years I found there was much more information that was left over. Stuff that I couldn’t use on the radio show because a lot of stuff just does not translate well on to audio but it’s good on the printed page. So why not gather all the research that I’ve done and put it in a book. So I did and it was the Alternative Music Almanac. It’s sold remarkably well, about six or eight thousand copies, I can’t remember which.”

Do you have a favorite episode of The Ongoing History?
“The way I judge it is like this, if I do this for a living 24 hours a day/7 days a week and I can find something that impresses me and makes me go: ‘Wow. That’s cool, I didn’t know that.’ If I’d never heard it before, then you haven’t. So if I’m always impressing myself then for normal, regular people with lives it should be double or ten times as impressive.”

Is there any other music you listen to besides alternative or new rock?
“Two things. I’ve been beginning to get very superficially into the most meager portions of jazz. Just right on the surface and I’ve also been getting deeper into the history of rock music. And what I mean by the history, I’m talking about the 20’s, 30’s and 40’s. And the other thing is nothing but silence. If I’m listening to the radio 12 hours a day I just want to have quiet. There is a fatigue factor. After a while you get desensitized to it. So you need serious time where you listen to absolutely nothing and give your ears a rest.”

A bit about the book
I’ll be honest, until I read this book I had no idea how the Sex Pistols started, or who the heck the Velvet Underground was. But, I got a bit of a clue after I started reading Alternative Rock. It’s also a really easy read and tell you all about the sex and drugs and rock & roll.

The book takes you through the last 25 years of music to look at the most influential bands who have changed the kind of music we call “alternative” today. From a kid named James Osterberg (Iggy Pop) to Kurt Cobain you get a little look behind some of the people who put new life into sounds most bands had never experimented with.

Each chapter goes through the history of each band and explains how things changed, when each major release was issued, and what happened next. It’s thoughtful and engaging and there more info than you could ever wish for. Except for a few typos, this book is nearly perfect actually. Good for anyone who wants to know more about music history.