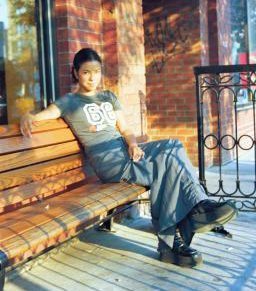 Hailing from Forest, Ontario, Emm Gryner has launched her third album, Science Fair, and is already receiving critical acclaim for her best work yet. Some people may have wondered what would happen after she lost her record deal to the Universal take-over of Mercury Records, but they needn’t have worried. She’s going to do it herself.

From writing to playing (and even some mixing) Gryner is the one in charge. Her latest album is a tribute to the art of creating a good album instead of the over-produced slop other artists are releasing. She’s smart, intelligent, funny and ready to wow her audiences with some great new material.

I first heard Gryner play at the Humble and Fred Christmas party (a local radio event), here in Toronto at the Horseshoe Tavern. At that point she was fresh from releasing her album Public with Mercury Records and was still playing “Summerlong” as her main piece. It’s still a favorite among her fans at concerts, but now she has much stronger material. Many of her songs on Public, her second album are much more sombre and tragic pieces. But she said, “I never really set out for tragedy. It sort of just happened.”

“All records should be reflections of the year or two that just went by. Public reflects going through break ups and rejections, and not being equipped with the emotions to deal with it. That’s something you learn through experience.”

And Gryner is certainly experienced now. She has been on a cross Canada tour, fallen in love with a “boy” who lived in England (listen to “Boy Races” on Science Fair), and she even recorded Public at the Real World Studios (Peter Gabriel’s place).

“It was one of the most amazing times of my life.” She said, and despite her general lack of star-sickness, she was very glad to meet Gabriel. And for Gryner, part of meeting people abroad is also a part of building her road-family. “I think you have to create a little bit of a family when you’re on the road. Otherwise there’s no support.”

Support hasn’t been hard to get since she won the Mix 99.9 talent contest in Toronto. The prize money helped Gryner create her own label, Dead Daisy Records, and produce her own music. Mix has been very supportive in playing her music and I saw their van at the show she performed at Splash in Toronto.

When I asked Gryner about her influences she gave me a funny smile. “I grew up with the music that people frown upon.”

In other words, bands like Guns ‘n’ Roses, Motley Crue, and Slaughter. She defends herself by saying, “It was considered cool, very melodic.” But she has only tried recently to revisit those days “out of curiosity.” A little frightening is the fact that she bought the new Def Leppard album. But all was not lost. “I couldn’t get through it. I desperately wanted to go back to the 80’s but I couldn’t do it. I couldn’t make it past track three ’cause there were all these big Def Leppard gang vocals. That just wasn’t right.”

She realised her mistake too late of course, “I’m going to regret telling that story, aren’t I?”

But her rock influences are what make all of her music sharp. It is her mix of pop and rock that differs from everything else out there. Her vocals are rich and earthy without being too raspy. She mixes her emotional lyrics with tones that bring out each word. Not many vocalists can claim to have such a unique singing style, but Gryner’s voice is well placed and enriched by her music.

So where did it all begin? All the way back when Gryner was 4 years old her mother asked if she wanted to learn piano. That’s where things started moving.

“It’s the one answer that governed my entire life.” Gryner devoted the coming years to learning music and writing. By age 14 she started learning bass and then later decided to pick up the guitar.

At 10 she started writing music and songs. “My older brothers were writing and I’ve always been jealous of them. They were in bands before I was.” Her brothers seem to be an inspiration to Gryner’s hopes. They can only be described as a musical family considering one of her brothers lives in California and is an engineer with bands like Filter and Rob Zombie.

In 1995, after going to college in London, Ontario for music engineering she moved into Toronto to practice playing live to an audience. And what has been her inspiration?

“Pure money at this point. [laughs] I had something to say and it’s always fun to write songs.”

Considering Gryner’s attachment to music I asked her about this whole MP3 issue. To her, the good that can come out of it is far more important than the other problems, “especially for unsigned artists. It’s a wicked time to not be on a major label right now.”

She thinks that unknown bands will get the opportunity for some great exposure. And the only likely people to notice any discomfort will be the big labels and the copy right laws. To Gryner, the possibility for promotion of small artists is more important than protecting artists with big contracts. “It’s not about labels – it’s about making records.”

So she make records. Really, really, good records. Since forming Dead Daisy she has released two of her albums through her label and added some other artists on as well (Cicero and Noah’s Arkweld). I wondered how she felt about being lost in the Mercury shuffle, but she said, “[s]ome artists are just not meant to be on major labels. Either that or major labels have to change their entire way of thinking.”

So if music is so important to Gryner, how does she find time for anything else. Well from what I saw, she doesn’t. At one point during a performance she said, “I really want to get married but I realise I have to, ah, find a boyfriend first.” And it’s not just time that stands in her way, her ambition and love for music seem to be a much more important goal for her. “It’s a mystery to me how people make it work. Just not something I’m ready to give.”

For now, she will be the little label that could. But I don’t see it staying that way for long. Sooner or later she is going to get picked up by another label that will propel her into the real name game. Until then she seems content, and who wouldn’t be, especially with a tour coming up with Ron Sexsmith.

A lot of artists try to leave an impression with their music; some memory that will stay with you. Most of them don’t even come close, except for Science Fair.

Science Fair flows like a great cresting and falling concerto and it never fails to go someplace you didn’t expect. Gryner succeeds at making this album catchy but she also makes songs that are always more interesting than the last.

At first I was afraid the lack of a “real studio” might hinder the full sound each song could have. But the music has it’s own simple stories and melodies that would have been ruined with more instruments. The songs are personal and Gryner’s voice is always haunting and enchanting.

“Stereochrome” is one of the best songs on Science Fair with it’s lilting cello and drums beating a heart beat in the background. It is by far one of the strongest songs she has created and also one of the most endearing. “Good Riddance” is another song to listen for. It has some of the strongest pop sounds on the album, but “Disco Lights” takes the cake for presence and offering up something a little different.

There is one last reason to buy this album. Gryner includes a remake of a song by Paul Weller called “You Do Something To Me.” She captures the soul of this song and makes it into something all her own. The slight sound of piano and her enticing voice will send chills up your spine, especially as it reminds you of someone dear to your heart.