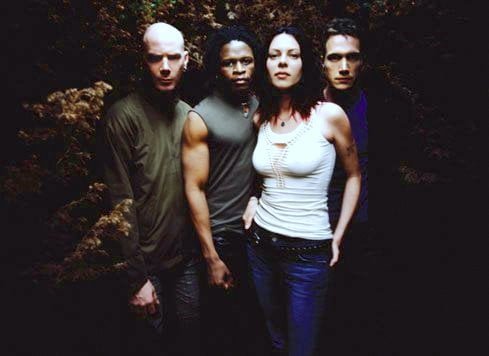 Once you see Tara Slone burn her way through unforgettable Joydrop tunes like “Beautiful” or “Sometimes Wanna Die”, you might find it hard to believe that before she was singing for the band, she wanted to be an opera singer.

As she says in her bio, “I received a scholarship at Dalhousie University and did a year of music program there. I quickly realized that although I loved singing, I didn’t want to spend every minute of my life living and breathing opera.”

So what did she do? “I left school, pierced my nose, got a tattoo, moved to Montreal and joined a rock band.” But it was still a while before she auditioned for Joydrop and the only reason she actually ended up in Toronto at all was so she could pursue a career in acting.

After six months of struggling and feeling miserable because she wasn’t singing, she found an ad in a newspaper – “It’s funny thinking back to that, because I almost didn’t bother to call. I spoke to someone named Tony [Rabalao] (I thought he was Italian) on the phone and made arrangements to meet at the Joydrop rehearsal space. The connection was instant and the rest is history.”

The first big deal for the band was getting tremendous airplay for their song “Beautiful”, which was on Metasexual, their first album. From there, things got crazy and after getting noticed by Tommy Boy Records, they signed a record deal that has now resulted in the fantastic release, Viberate. “Sometimes Wanna Die” is the first single off this new album and already people have gone nuts for it. A lot of hit radio stations have even picked it up and have been playing it in high rotation.

It didn’t hurt the band’s popularity that they filmed the video for “Sometimes Wanna Die” with veteran rocker, Tommy Lee Jones (of Method’s Of Mayhem/Pam-Anderson-videotape fame).

Collectively, singer Tara Slone, bassist Tom McKay, drummer Tony Rabalao and guitarist Thomas Payne have all combined their efforts to write their music. With four writers things can get a little harder to finish and as Payne said in an interview with UtterMusic.com, “A lot of bands have just one songwriter and the other musicians just augment that. With us, with four writers, it’s extremely difficult in a lot of respects. You’ve got four different visions but you have to make them work together so they’re all coming from the same place. Basically it’s a harder demo process, because everyone will bring in their songs and we demo tons and tons of songs and it’s really hard to pick the ones that go on the record.”

It’s pretty rare to have so many writers in a band, but Joydrop is a rare band indeed. A fine example of that is the Theremin that Slone plays on the new CD and at concerts. What’s a Theremin you ask? An explanation at ThereminWorld.com describes it as a “unique [instrument] in that it is played without being touched. Two antennas protrude from the theremin – one controlling pitch, and the other controlling volume. As a hand approaches the vertical antenna, the pitch gets higher. Approaching the horizontal antenna makes the volume softer.”

Whatever else you want to say about Slone and the rest of the band, they’re also really thoughtful, intelligent people (just ask Slone about her views on women in the music biz – especially in heavier bands) – unlike a lot of other bands that I’ve met. It’s a great quality and it’s obvious once you start listening to them that there’s a lot more to them beneath the surface. Kind of like an iceberg – except that’s not what I think of when I think of a “joy drop”.

Keep your mind out of the gutter though, the last guy (from what I heard, one Dean Blundel who is currently with Edge 102) who got lewd & crude with Slone ended up on the receiving end of her writing talents. “American Dreamgirl” is in fact a statement about that whole situation and the beauty myth as well. But, regardless of what you listen to the band for – their social commentaries or their rock tunes – try to keep an ear out for Slone’s occasional slip back into her operatic style. It’s pretty hard to catch, but maybe that’s the little drop of joy in the band’s slightly dark, musical world?

Joydrop will be performing at this year’s Edge Electric Christmas at the Kool Haus on December 14th along with Bif Naked and Swollen Members.