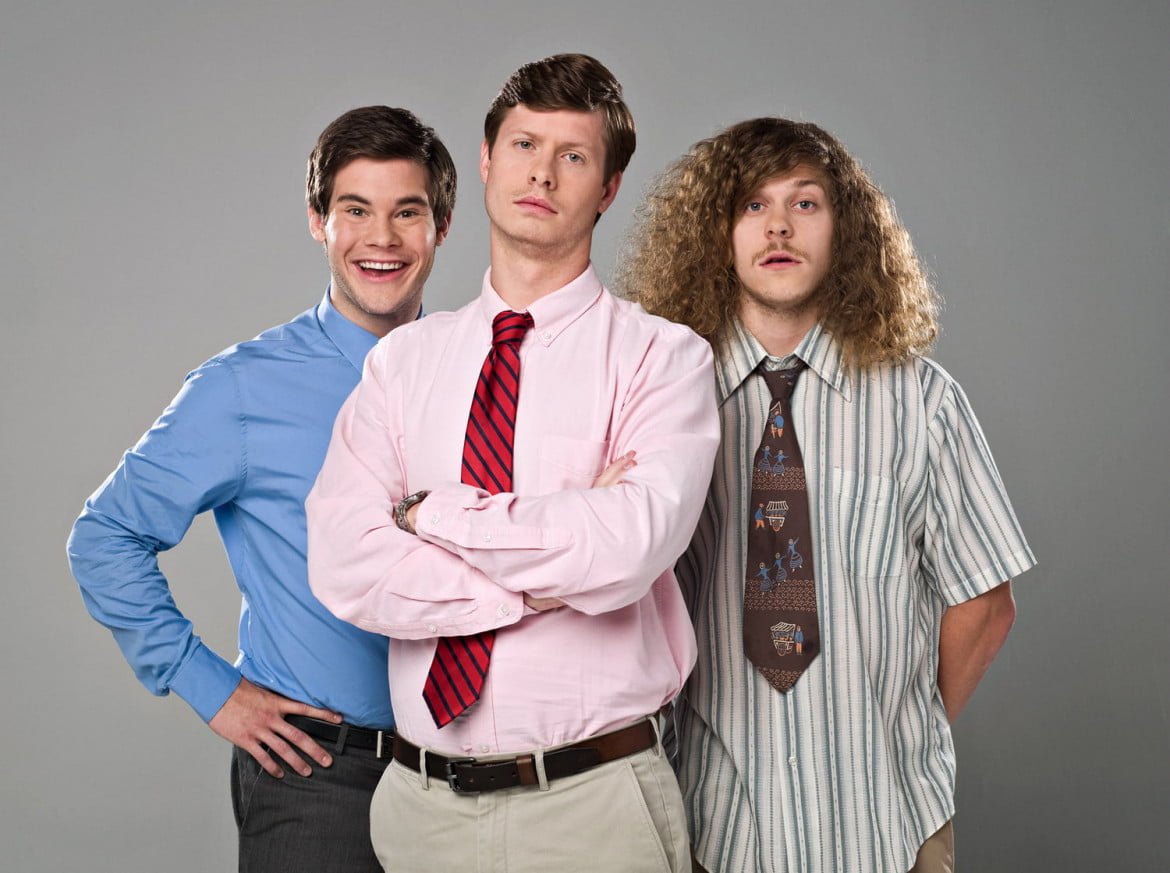 What happens when three guys live together, work together, and party as much as possible the whole time? That’s the premise behind the stoner comedy Workaholics from the comedy troupe Mail Order Comedy and Scrubs executive producer Kevin Etten.

Adam Devine, Blake Anderson, and Anders Holm star–as Adam, Blake, and Anders–in The Comedy Network’s 10-episode series about three guys going nowhere at a dead-end office job and loving every minute of it.

Workaholics airs Mondays 10:00 PM (ET/PT) on The Comedy Network, and here’s what star Adam Devine had to say about the series.

Andrew: Going into this show did you have any inspiration for how you wanted to play the character? Were there characters or shows that influenced you, or did the character just spring to life based on the scripts and the production itself?

Adam: “I wanted my character to be really dumb. Confidently dumb people and characters are the funniest in the world to me. I love comedic actors like Will Ferrell, Adam Sandler, and Zach Galifinakis who always seem to play likable idiots who you can root for.”

“As far as shows that inspired me I would say Always Sunny in Philadelphia and the Lonely Island Crew from SNL really influenced myself and the other guys. Not necessarily in comic sensibility and tone, but how they came from no where, made their own opportunities, worked hard and now they have the creative freedom and media outlets to do what they want and have people actually see it.”

Andrew: What did you enjoy most about making the show?

Adam: “The snacks. We shot the show at the actual house that Blake, Kyle and myself lived in. It was awesome to wake up and walk to the driveway where breakfast would be waiting for you. The first few weeks of shooting I gained a weird amount of weight from all of the chocolate covered raisins I devoured. I thought raisins were good for you!”

Andrew: The characters on the show are kind of obsessed with drugs and slacking off, would you say you have any obsessions for anything?

Adam: “I would say that my two major obsessions are food and girls. Both of them just smell so amazing.”

Andrew: What was the most memorable show for you as an actor?

Adam: “For me it is our season finale. In the episode I meet a sexy older woman (Laura Kightlinger) and move in with her. She has the financial means to help me fulfill my life long dream of becoming a professional body builder. I have a spray tan and spend most of the episode in a speedo. It was weird how comfortable I got in that thing after I got over the fact that everyone knew exactly how big my wang is.”

Andrew: Imagine you can see into the future. Where do you see your character in 25 years?

Adam: “As a U.S congressman. He is an ego maniac and just dumb enough that he could pull it off. After he is kicked out of the congress for de-pantsing someone, he will start his own energy drink company.”

Andrew: Can you explain why your characters are named after the actors? Is there a story behind that?

Adam: “We all have a hard time remembering lines so we figured we would make it easy on ourselves. Plus we all thought it was kind of cool to use our real names and shoot in our real house and use our real dirty dishes and beer pyramids as set dressing. I guess we’re just lazy.”

Adam: “I do stand up so I’m always pretty busy doing that and as a group we are writing a movie. I would love to be in a Die Hard movie. I could play John McClain’s illegitimate son and when Bruce gets too old to kick ass I could step in and keep the franchise alive!”