Stuart McLean on rails and tales 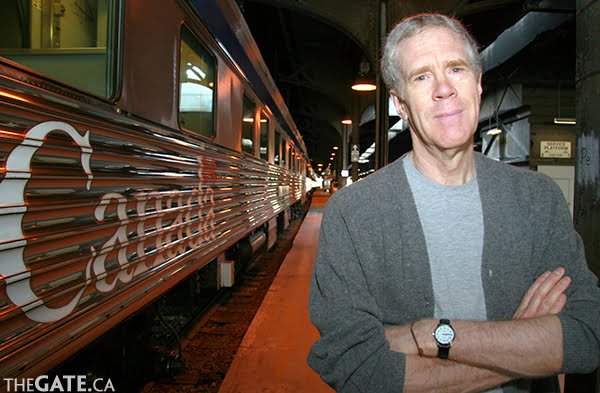 Stuart McLean has the tour schedule of a rock star. Every year he can be seen on stages small and large from one end of the country to the other, and it’s all for his very popular CBC Radio show, the Vinyl Cafe.

Stuart’s show is a treat, flavoured by Canadian artists, and topped by his funny, and touching stories. Fans of the Vinyl Cafe gather to hear guest musicians performing with him, the stories he has gathered from listeners, and most importantly of all, his latest tale of the fictional, but earnest, Dave and Morley.

Recent travels have taken him to the United States, and into parts of the country he has never visited before, but for his latest trip, Stuart is really putting his luggage to work.

It all started on Saturday, April 19, when Stuart set out from Toronto on VIA Rail. He arrived in Vancouver on Tuesday, April 22, before turning around again and taking the train back to Toronto. As he travels, Stuart will meet with people on the train, gather stories, and on the last day of his cross-Canada trip he will present a special performance of the Vinyl Cafe on the train with stories inspired by the trip and the people he has met.

I met with Stuart just a few minutes before he was set to depart, and his mood about the trip was palpable. The key to the whole trip is, as Stuart put it, the “romance of the rails.”

“Isn’t she a beauty?” Stuart said, pointing down the length of the train. “There is nothing like falling asleep in one part of the country and waking up miles away, in another town, seeing the countryside roll away.”

On his first day he had plans to meet with the train engineers, spending time at the front and back of the train, watching the expanse of rail coming toward him, and then slipping away. 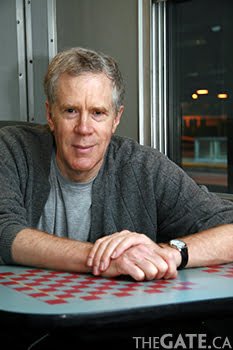 For the rest of his time on the train, Stuart said he was looking forward to meeting people in the dome car, and enjoying what is undoubtedly one of the greatest experiences in Canada: traveling the country by rail.

In speaking to Stuart about his show however, the experience most on my mind was his stories, and the reactions he gets from audiences. He was quick to point out how he has no way of judging what his show is really like, since he can never experience it as an outsider, but he does take a lot of pride for the reception he gets from fans.

“I guess the thing I’m proudest of, when I do my shows in theatres across Canada, is that there’s always a grandfather or a grandmother in their 90s, and there is always somebody nine years old. And many people in between. College students and young married people and retired people. And they all seem to get it on their own level. They find a place in the work where they feel comfortable and that is the thing I feel maybe the most proud about, that we’ve created this world that people come together around.”

Stuart will be joined for his VIA Rail show>, which takes place on Friday, April 25 in the Park Car, by singer-songwriter Reid Jamieson. Visit Stuart and the Vinyl Cafe on the web at www.cbc.ca/vinylcafe and for more on VIA Rail head over to www.viarail.ca.