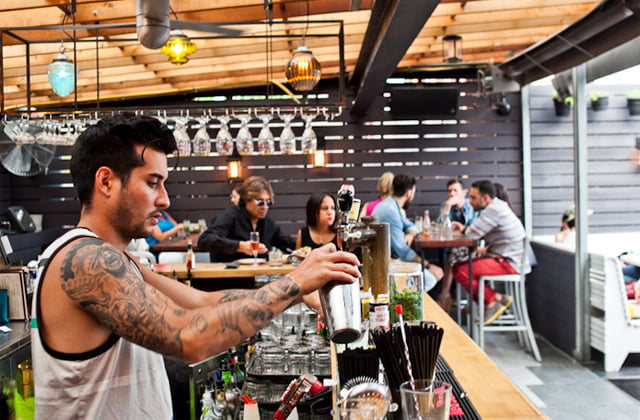 Toronto’s Drake Hotel is popular with out of town visitors and renowned as an arts and entertainment destination, and this summer they’re trying to build on this by luring Toronto residents to escape in the city instead of heading to cottage country. The highlights at the Drake this summer are a menu featuring virgin cocktails, a lobster fest, as well as an art installation by Ron English.

For those in the mood for seafood, Sundays between July 28 and August 25 will be The Drake’s lobster fest. A one-pound lobster meal will be available for $34.95 in the redesigned Sky Yard. The Yard is themed around bold summery geometric patterns and boardwalk benches. A complimentary bottle of Alexander Keith’s is included to carry on the Maritime feel. Accompanying the lobster are sides from Ted Corrado’s summer menu including Cuban corn, potato salad, coleslaw, jalapeño cornbread, and flourless chocolate cake trifle.

The other addition to the menu are classic alcohol-free cocktails for those wishing to avoid a hangover or who simply love a root beer float. For $7 you can get the Blackberry Bramble made of orange flower water, blackberries and lemon juice, a Lavender Lemonade or a Raspberry Mint Lemonade. For $6 you can get the previously mentioned Root Beer Float and you don’t even have to scoop it yourself.

The Drake Escape Hotel Package is aimed at cyclists looking for a staycation. It includes a one-night stay at one of Drake’s 19 Crashpads (a size of room suitable for two guests), rental of two cruiser bikes, and a picnic lunch for two by Chef Currado. A map of Toronto’s most bikeable spots including galleries, parks, pools and shopping is thrown in.

In keeping with Drake’s reputation as an art and culture hot spot they have added a Ron English Installation that will be in place until September 2. The outdoor exhibition treats Drake’s front doors. English is known for combining pop culture and classic art in dramatic juxtaposition.