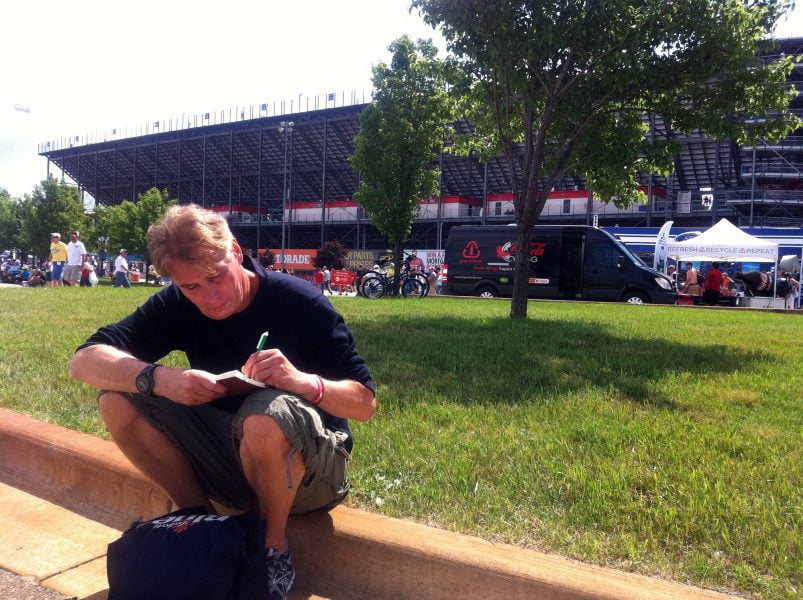 When you hear the term NASCAR, and you are not familiar with that sport slash culture, a few solid stereotypes will immediately spring to mind, and generally speaking those stereotypes have solid foundations (the roots of this sport can be traced to bootleggers in North Carolina, like Junior Johnson, who became the first NASCAR superstar, but who began his career as a moonshine runner who modified his car to outrun the law–Jeff Bridges immortalized Johnson on film in the movie The Last American Hero). But going to a NASCAR race is an experience that goes way above and beyond the mere notion of attending a “race” or a “sporting event”. Having just come back from my second such experience at the gargantuan Michigan International Speedway, I can say without a shred of exaggeration that attending a NASCAR event is one of the most enjoyable and interesting travel experiences I have ever had.

It was my ladyfriend and companion (and ace TV editor) Rhonda Thain who first indoctrinated me into the NASCAR scene–she is a big fan and had always wanted to attended an event live–and as someone who is always looking for fun new excursions and experiences, I was more than delighted to make the trip with her. That first trip to the lush, rolling Irish Hills of Michigan for the event was so completely positive and fun I could not wait to repeat the experience this year, and I am here to tell you that you do not have to be a NASCAR fan or even a sports fan in general to have a utter blast going to this place for this spectacle–it is almost like a combination of a fun road trip to the countryside combined with an enormous sociological happening–a crowd of 100,000 or more people all gathered in a field with the singular purpose of having a shared good time with everyone who made the trip to be there.

The event is called the Quicken Loans 400 (a second such event will be on August 16, 17, 18 called the Pure Michigan 400) and for the dedicated die hard fan it is a week long camping vacation in rural Michigan that climaxes with the three and a half hour thundering roar of their favourite racer rocketing around the Michigan International Speedway track. For us, it is a super-cool day trip that begins in Windsor, Ontario–takes us through the sadly blighted city of Detroit, then out through the beautiful green farmland of rural Michigan to the breathtakingly enormous Michigan International Speedway to be suddenly in the midst of about a hundred thousand of the friendliest people you will ever encounter in those numbers.

I recommend that you stay at the Days Inn in Windsor–a comfortable little hotel with spacious rooms, complimentary breakfast, great Wi-Fi, and an extremely pleasant and efficient staff–and what the Days Inn Windsor also offers is a location that is literally across the street from the border crossing tunnel from Canada under the Detroit River into Michigan. From there it is an easy highway drive out to Irish Hills–about 80 miles or so–that takes you through beautiful farm land, quaint little towns (one called Clinton that has my favourite coffee shop–Brewed Awakenings) and spectacular lakes until you arrive at the roads leading to the track–the crowd thickens but Michigan Stare Police are everywhere and keep everything moving in an amazingly orderly manner. Police helicopters buzz low overhead.

When you arrive at Michigan International Speedway, you are directed to the parking area in an enormous field that is ringed by campers and tents that probably make the location temporarily one of the largest populated areas in the region. Parking is well organized and everyone does as they are directed–once you enter the area everyone is there for the same purpose, no one butts in line, no road rage, no jerk behavior of any kind.

As we drove alongside the tent city towards the parking area, a group of campers shouted, “Hey look, Canadians! We love Canadians!” I smiled and waved and replied, “We love being here, brother.” One of the guys then reached into a cooler–he thrust his hand at me and said, “Here Canadians, have some shots!”–and slapped little bottles of Jameson Irish Whisky and Fireball Whisky in my hands.

Once parked, an efficient tram system is in place to ferry you to your grandstand around the enormous facility–again, there are MIS (Michigan International Speedway) personnel everywhere handing out maps and giving information to keep everything smooth and happy.

At the track it is like a giant outdoor mall of shops and restaurants and events happening everywhere. NASCAR is an exceedingly family-friendly scene, so there is a large carnival midway for kids as well. That is something I noticed very early in the experience–there are just as many females as males in attendance, many children, many elderly people–it is a complete cross section of middle-America. The prices for souvenirs and food are not in the super-gouge range that you find at most sporting events, and concerts and the food are actually very good given the size of the crowd needing to be fed.

Our favourite lunch stop is a pizza tent run by Cottage Inn Gourmet Pizza (since 1948)–here you get a freshly made cheesy-pepperoni pizza for a reasonable price–not a cardboard slice they throw at your from under a heating lamp–this is a freshly made, out of the pizza oven pizza you take over to the lawn and sit down for a little pizza picnic overlooking a sea of campers and trailers and tents.

This tent-camper city is also an interesting part of the experience as most have personal flagpoles erected beside them flying flags of their favourite racers, the American flag, Confederate flags, and in many cases, Marine Corps, or US Navy, or US Army unit insignias on them.

When it is race time, you head into the stands, and again it is striking how friendly and efficient everything runs–security is there but not obtrusive and you are directed with signs and announcements to text any issues to a certain address–your concern is addressed immediately.
Canadians are not only respected there, they are honored both verbally from the announcers and by the fact that the Canadian national anthem is played to a rousing cheer before the American anthem, even though there are no Canadian drivers on the grid.

The race itself is a thunderous cacophony of roaring engines and cheering–the roar of the engines is so intense you vibrate in your seat as they blast by in their colorfully painted machines. Since you are allowed to bring coolers into the stands, there is much beer and liquor consumed, but it never gets unruly or unpleasant. Compare that to the average Toronto Maple Leafs game where drunken louts are everywhere disrupting your enjoyment of the game within the first ten minutes and where half the crowd is made up of bankers, lawyers and condo hustlers, as they are among the few who can actually afford to be there.

At the end of the race the winner, no matter who he is, is cheered heartily for having entertained us. In this case it was an unassuming fellow named Greg Biffle (my favourite guy, the slick American badass from Las Vegas, Kyle Busch, finished fourth)–and the day after the race you get a telephone message from the winning driver thanking you for coming out to the event!
Michigan International Speedway has an App–Discover MIS–that is so all encompassing in how helpful it is that you can virtually go there and be assisted in planning every aspect of your trip.

I have been to many Formula One races, Indycar races, soccer matches, hockey games, film festivals all over the world, and I can honestly say that attending this NASCAR event in Michigan is one of the most positive and completely enjoyable outings I have had. Set aside what you think you know about the NASCAR culture and crowd and check it out–you will be amazed at just how much fun you have.

Christopher Heard
Christopher Heard built his career out of a lifetime love of movie history and culture. His first screenplay was optioned at 21, he wrote a twice weekly movie column in a local newspaper that lead to a long, Gemini Award winning stint on the CBC show On The Arts and the creation and co-hosting role on Reel to Real for nine years. Since then Christopher has written books on a number of filmmakers, including Johnny Depp.