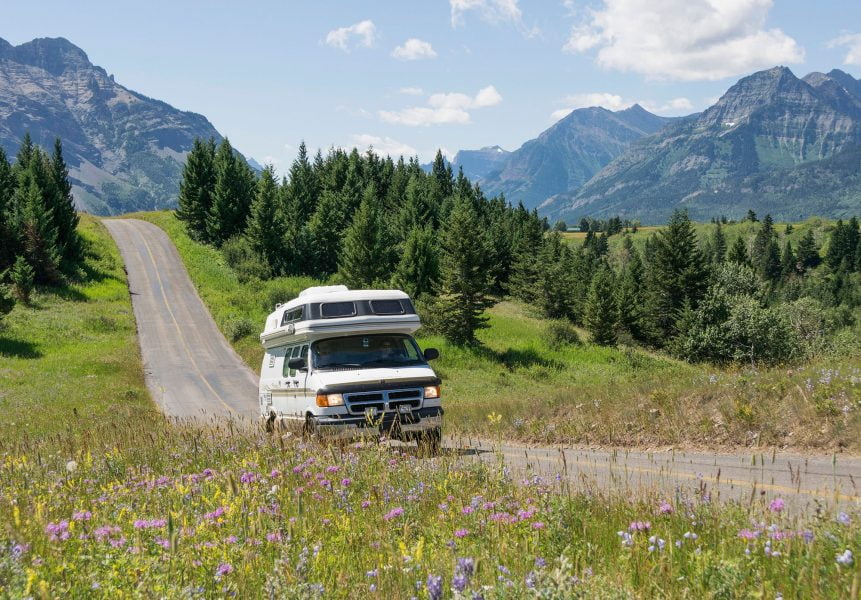 Spring has sprung and the grass is turning green across the country, so that must mean that it’s time to take your RV out of its winter storage and head for new adventures, or perhaps even try your hand at renting an RV and going on an adventure. Canada’s range of stunning national parks offers a number of must-see destinations for outdoors enthusiasts, so take a look at these 15 beautiful locations that span the country.

Cape Breton Highlands National Park of Canada
Breathtaking landscapes welcome you as they shape Cape Breton Highlands National Park in Nova Scotia. High, steep cliffs and deep river valleys dissect the forest-covered plateau bordering the Atlantic Ocean. One-third of the famous Cabot Trail runs through the Park along the coast and dominates the Highlands. Located near the charming village of Ingonish, the Broad Cove campground (74 sites) is in a forest bordered by a long sandy beach on the Atlantic Ocean.

Prince Edward Island National Park
Surrounded by landscapes where dunes, archipelagos, sand spits, beaches, red sandstone cliffs and forests endlessly follow each other, dive into the history of the people who lived there, whether Aboriginal, French or Acadian. The Cavendish Campground (73 sites) is located next to a secluded patrolled white sandy beach.

Fundy National Park – Dark Sky Preserve and Biosphere Reserve
The spectacular force of the tides in Fundy National Park, New Brunswick is a marvel in itself. Hike the magnificent trails lined with river valleys, lakes, coastal forests and beaches, and relax and admire the wonders of star clusters at night. The Chignecto North Campground (10 sites) is located on a large wooded lot, 10 minutes by car from the Bay of Fundy.

Riding Mountain National Park
Visiting Riding Mountain National Park is the first step in the discovery of 3,000 km2 of hills and valleys extending eastward from a dramatic rise known as the Manitoba Escarpment. The Wasagaming Campground (86 sites) provides access to the main beach, restaurants, golf course, hiking and cycling paths, a horse-riding trail and many other services.

Prince Albert National Park
Discover a preserved northern evergreen forest, home to abundant wildlife including one of the few populations of wild plains bison. Magnificent scenic routes criss-cross the Park. The Red Deer campground (161 sites) is located a short walk from hiking trails, a beach and a wide range of services.

Jasper National Park – UNESCO World Heritage Site and Dark Sky Preserve
This grandiose, icy jewel of the Rockies offers nearly 1,000 kilometres of trails, incomparable wilderness and the second most extensive dark sky preserve on the planet. Whistlers campground (781 sites) is located on the Icefields Parkway, 3.5 kilometres from the town of Jasper.

Kootenay National Park – UNESCO World Heritage Site – Canadian Rocky Mountain Parks.
Diversity is Kootenay National Park’s trademark. A varied landscape and ecological environment not only includes glacier-topped peaks along the Continental Divide, but also semi-arid open grassland forests in the Rocky Mountain Trench where you can find cacti, and hot springs! The hot springs are only 2.7 kilometres from Redstreak Campground (242 sites) and a 1.8 kilometre trail connects the campground to the village restaurants and services.

Campgrounds with electricity only

Forillon National Park
A jewel of the Gaspé Peninsula, Forillon National Park’s mountains are bordered by the Gulf of St. Lawrence and Gaspé Bay. Its boreal forest is home to diverse wildlife which are easy to watch. Its breathtaking cliffs are home to thousands of sea birds and its shores host colonies of seals. The recreation centre and pool is located a short distance from Petit-Gaspé Campground (33 sites) which is only a 15-minute walk to a pebble beach.

Kejimkujik National Park and National Historic Site – Dark Sky Preserve in the heart of the second largest biosphere reserve in Canada
Guarding the tales and memories of the Mi’kmaw who traveled and flourished there for thousands of years, Kejimkujik National Park is located in an area mixing the boreal forest and southern forest. The coast is surrounded by a crown of stones and its beauty is recognized worldwide. Jeremys Bay Campground (106 sites) is located in a lush forest with trails and the warm, sandy beaches of Kejimkujik Lake close by.

Banff National Park – UNESCO World Heritage Site and Canada’s first national park (1885)
Who doesn’t dream of seeing the turquoise waters of Lake Louise in Banff National Park? Located in splendid, wild nature, the Lake Louise Campground is only 4 kilometres from the Lake and reserved only for fully enclosed RVs. 169 sites.