Montreal: A celebratory time to visit for 375th anniversary 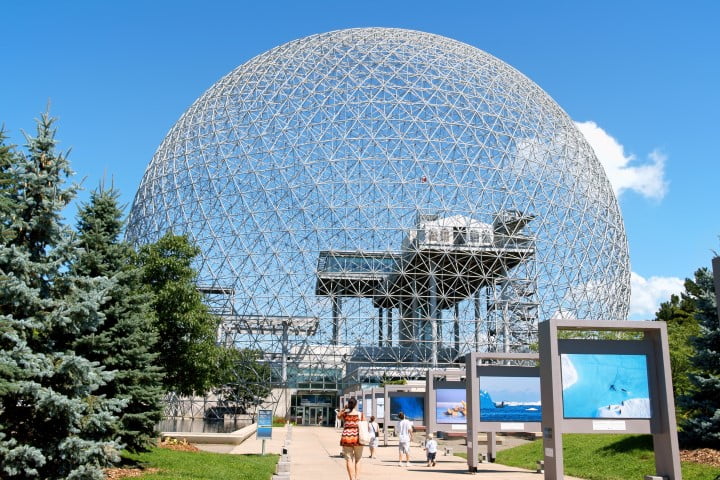 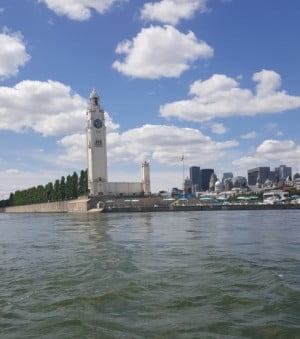 A city so vibrant, full of life and celebrating it’s 375th birthday you won’t have a moment to spare checking out the sites, the exhibits, and what the city has to offer when it comes to food.

I recently spent a few days in Montreal covering the world famous Just For Laughs festival–now in it’s 35th year–and took in a few of the city’s highlights.

On May 17, 1642, the city was founded by Jeanne Mance and Paul Chomedey de Maisonneuve, who led French missionaries and settlers onto the island. 375 years later, the city is more vibrant than ever with so much to see and do.

Accompanied by my husband, upon arrival we checked into our accommodations for the next four days, the Boxotel. This quaint hotel is perfect if you are staying for more that just a few days as every room has a kitchen, small fridge and a washer and dryer. It also has a small workout room, sauna and a roof top patio which includes a small pool and a hot tub–a perfect place to sit and relax after a long day of touring. Plus it’s minutes away from the downtown area and within walking distance of the Old Port and many of the city’s major attractions.

We began our visit with a walk downtown, where most of the festivities for this year’s Just For Laughs Festival took place. The Bouffons MTL Festival between Jeanne-Manceand Clark Streets along Sainte-Catherine Street West – Quartier des spectacles was hopping. This gourmet open-air village was packed with picnic tables and food vendors to accommodate the continuous flood of people wanting to experience some great food and drink. 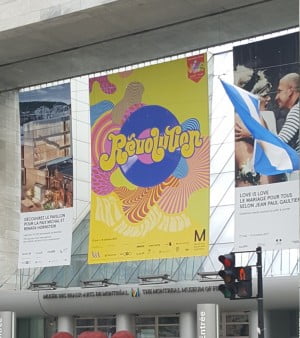 The Montréal Museum of Fine Arts is a must see where the current exhibit REVOLUTION is featured. It’s a musical odyssey that explores the ideals and aspirations of the late 1960s as expressed in music, film, fashion and design.  The exhibition looks at the consumer society, Vietnam War protests, the civil rights movement, the sexual revolution, experimentation with LSD, legendary concerts, communal living and environmentalism.

Later that evening, we walked to the world famous Notre-Dame Basilica in the historic district of Old Montreal.The church is located at 110 Notre-Dame Street West, at the corner of Saint Sulpice Street. It is located next to the Saint-Sulpice Seminary and faces the Place d’Armes square. Built in the Gothic Revival style, the church is highly decorated. The vaults are coloured deep blue and decorated with golden stars, and the rest of the sanctuary is decorated in blues, azures, reds, purples, silver, and gold. It is filled with hundreds of intricate wooden carvings and several religious statues.

Unusual for a church, the stained glass windows along the walls of the sanctuary do not depict biblical scenes, but rather scenes from the religious history of Montreal. It also has a Casavant Frères pipe organ, dated 1891, which comprises four keyboards, 92 stops using electropneumatic action and an adjustable combination system, 7000 individual pipes and a pedal board. 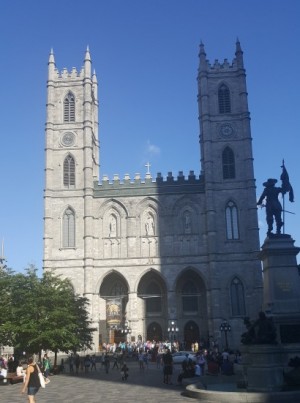 Currently open to the public at the Basilica (for an admission fee) is the spectacular new sound and light show, Aura.  The experience takes place in two parts. First,  you can explore the Basilica while discovering a series of multimedia installations that highlight the artwork beneath the building’s rood screens.  Then,  you make your way to the centre of the Basilica for the second, immersive portion of the experience. No matter where you sit, you’ll be able to enjoy this sensory experience of laser and lights and music. It’s quite an experience to behold.

The next day we looked forward our schedule which was jam packed and eye opening. The morning began with a walk down to the Old Port where people were taking in the boardwalk, renting bikes and checking out the parked yachts and boats in the harbour. We took one of the many offered boat tours, a 45 minute cruise with Le Petit Navire. (Boarding: Jacques-Cartier Quay in the Old Port of Montreal.)

With departures every hour, Le Petit Naivre is a unique and wonderful way to relax and find out a little about the history of Montreal and the Old Port. The boat is electric with a pollution free propulsion system so all the Captain needs to do is charge it up every night to accommodate several  daily tours. 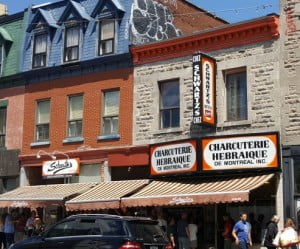 After the cruise we walked uptown to experience the world famous Schwartz’s Deli. A trip to Montreal is not complete unless you experience one of their smoked meat sandwiches. Located at 3895 Saint-Laurent Boulevard in Schwartz’s was established in 1928 by Reuben Schwartz, a Jewish immigrant from Romania and is considered a cultural institution in Montreal. Each sandwich is hand made and uses the  meat is made exactly the same recipe when the store first opened. You can either eat in or take out and trust me BOTH lines are long but totally worth the wait. We chose to do the take out route – but the secret of that is that there is a counter at the back where you can sit down comfortably and eat – there’s just no table service.

Although I was completely full from my delicious smoked meat sandwich I was looking forward to the next half of our day. I had booked a 3 hour walking tour courtesy of a wonderful little bike shop called Fitz and Follwell.

The tour, called “Flavours of Montreal” is a cultural food tour with depth. Along with our wonderful guide Emily we wandered through four cultural communities, learned  the stories of their inhabitants and mom & pop shop owners, and sampled the amazing food and drink most symbolic to their identity in Montreal. The North version covered the Plateau, Mile-End, Little Italy, and the Jean-Talon Market!

We sampled delicacies from a Portugese bakery, Wilensky’s a classic, family-operated soda fountain & Jewish deli whipping up grilled sandwiches since 1932, hot bagels from St.-Viateur, cannolis from Pasticceria Alati-Caserta -an outstanding and popular Italian bakery and finally delicious Quebec cheeses and ice cider at the Jean-Talon market!  Needless to say, there was NO need for dinner that night. 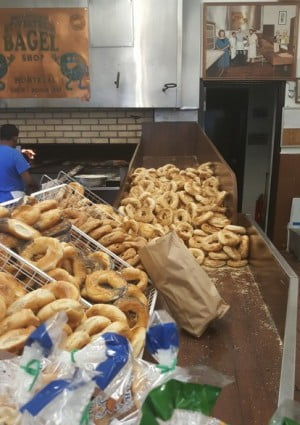 In the evening we took in the sites back at the Old Port and were treated to an up close and personal view of Montreal’s brand new giant Ferris Wheel, modelled after the London Eye.

La Grande Roue de Montréal promises to be an unforgettable experience that will officially be open to the public this fall.  Riders will get a panoramic view 60 meters high, with a breathtaking view of the river, Old Montreal, downtown and the mountains!

Our day ended enjoying the illumination of the Jacques-Cartier bridge situated at the Old Port. The Jacques Cartier Bridge is an emblem of the Greater Montreal area because of its history and architecture. Living Connections is a unique interactive lighting concept that, for years to come, will be activated in real time by the seasons and the energy of the city. This ambitious, innovative new luminous signature is a tribute to an iconic feature of Montreal’s urban landscape.

These are just a few of the highlights we were able to fit in during our stay, but I promise you that there is enough to keep you busy AND full if you decide to make Montreal your vacation destination for more than a week’s stay. Check out the Montreal tourism website for more suggestions and up to date exhibits.

In between touring the city and experiencing a lot of what it had to offer I also had the opportunity to see several comedy galas and catch up with many of the comedians who were in town for the Just For Laughs Festival.

One of the highlights (and there were many) was sitting down with veteran producer Mark Herzog and comedian W. Kamau Bell for a great chat about his unique brand of comedy. Mark is the  producer of the current running CNN series, The History of Comedy.

As host of the CNN docu-series United Shades of America, Kamau travels the country, offering viewers a rare yet eye-opening look inside the various subcultures of American life. The show is in it’s second season and was nominated for an Emmy as was Bell for Best host.

You can check out our interview below and for more of my Just For Laughs interviews you can watch them on my youtube channel (www.youtube.com/moviegalz)