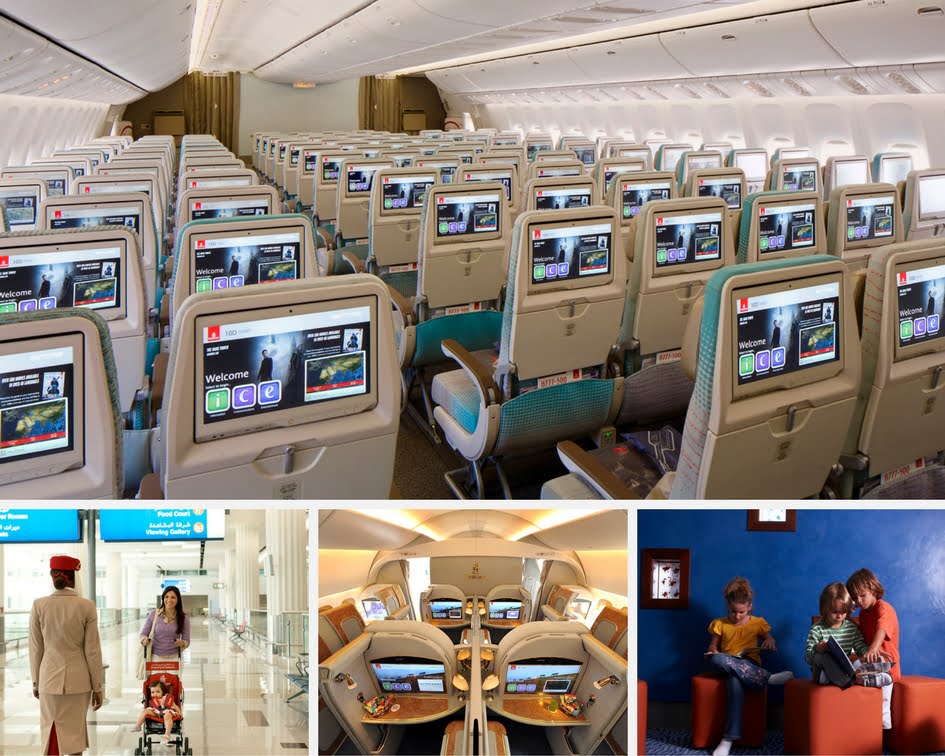 Travel is one of the best gifts that you can give your kids, opening up the world to them with memories that will literally last a lifetime. According to a study by Emirates Airline, children get bored just 49 minutes into flights though, so what can parents do during bigger trips–especially long-haul flights–to make the experience easier on everyone?

I spoke with travel expert Heather Greenwood-Davis, and Emirates Airline flight attendant Kelsey Johnson, about what parents can do for their next trip, and we came up with a number of ideas to make your next vacation easier. Read through for some of our best suggestions on ways that you can prepare, and keep the little ones smiling and relaxed.

Plan Ahead
“I think it’s fair to say that most families are struggling when it comes to a long haul flight,” Heather Greenwood-Davis said, “but a lot of the time, creating a plan can take care of a lot of the problems you can run into on the trip.”

“A lot of families are unclear about what they can do in terms of with little kids liquid and formula and that sort of thing,” Heather said. “So, with both of these it’s sort of a combination of doing the research ahead of time and understanding what’s being offered. Making sure that you have a few easy to carry snacks with you for peace of mind.”

“Also, checking with the TSA if you’re going to the United States, CATSA, in Canada, or even the airline themselves to get a sense of what’s allowed on board, and what’s the best way to transport them. I know with baby food and that sort of thing that most border security will allow you to bring it through, but they want to see it so you need to show it at security. It needs to be separate from everything else.”

“Another tip, too,” Heather said, “is that the TSA in particular allows parents, or travelers to actually ask questions via Facebook or Twitter. So, if you have something you want to bring with you and you’re not sure, you can snap a photo and send it off to them, and they’ll let you know if that would be okay.” 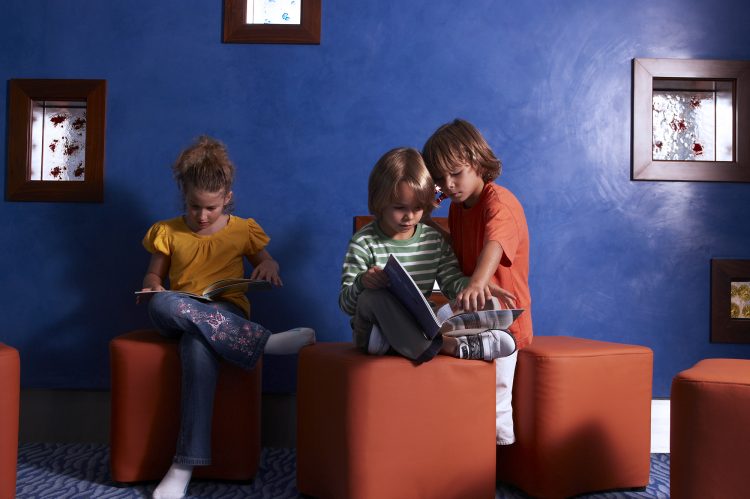 Before You Board
According to the tips found on the blog called Land of the traveler, before you leave for the airport, there’s a lot that you can do for your kids to get ready for the trip.

“But it can be as simple as making sure that you book your seats together. A lot of people don’t bother with the online check in ahead of time,” and that’s essential she said.

Talk to your kid about the trip coming up too. “If your child hasn’t been on a plane or they’re nervous about it, you can role play it,” she added. “You can help them understand a little bit about what it will be like on the plane. You can simulate the idea that when the light goes off, or you hear that sound then little bums have to be in seats. And sometimes we can’t move even though we want to move. That sort of thing.”

Packing, Clothes & Entertainment
When you’re packing, Heather also suggests putting a spare change of clothes in your carry-on, not just for the baby or kids, but for yourself, which is helpful for a lot of reasons. As Heather suggested, “when your child decide that they aren’t gonna keep their lunch in, they don’t just get it on themselves, right?”

“Also, don’t over dress the baby or child. Comfortable clothes are a good idea. Maybe pajamas for kids so they can sleep.”

If you’re bringing your own entertainment and devices, Heather has some other suggestions too.

“You want headphones that fit for the child,” Heather said. “A lot of times those little ear plugs are falling out of the ear. You want things that aren’t gong to be a nuisance to you, or to the people around you. So, nothing with any small pieces.”

“No big, loud noises, either. Easy art–anything that says, ‘mess free,’ Like coloring… and making sure you have enough for everyone.”

“The other thing I always do when I’m on board is make sure that I have a surprise,” Heather said. “So there’s something in my bag that they have no idea I’m bringing, that I’m only going to bring out in case of a severe emergency. It doesn’t have to be huge, it could even be the iPad, or electronics if that’s something that parents are using with their kids.”

“Of course, if you bring your own electronics then you will also want to make sure you brought the cords to keep it charged because the last thing you want is the Paw Patrol going dead in the middle of the show, and it being a problem.” 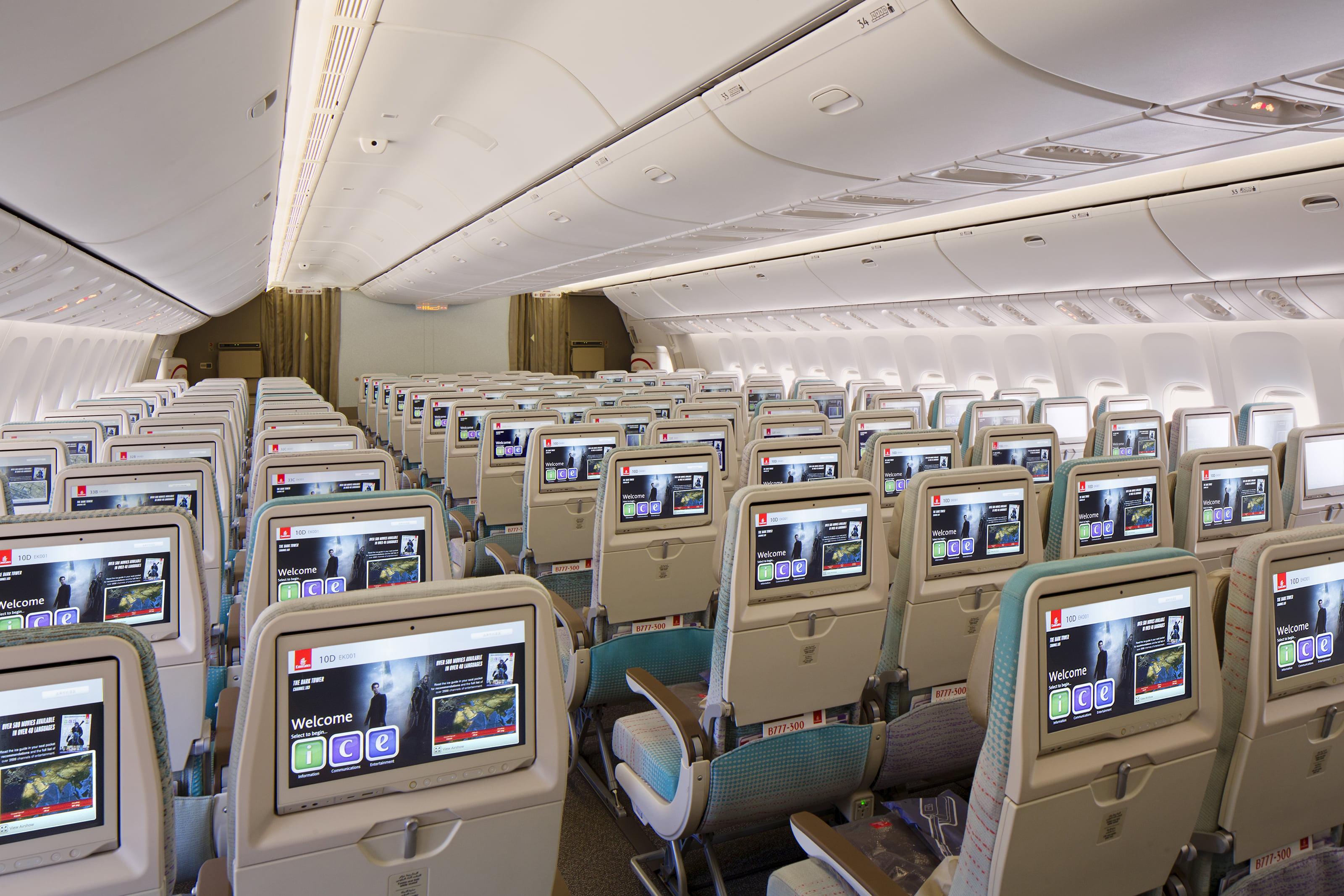 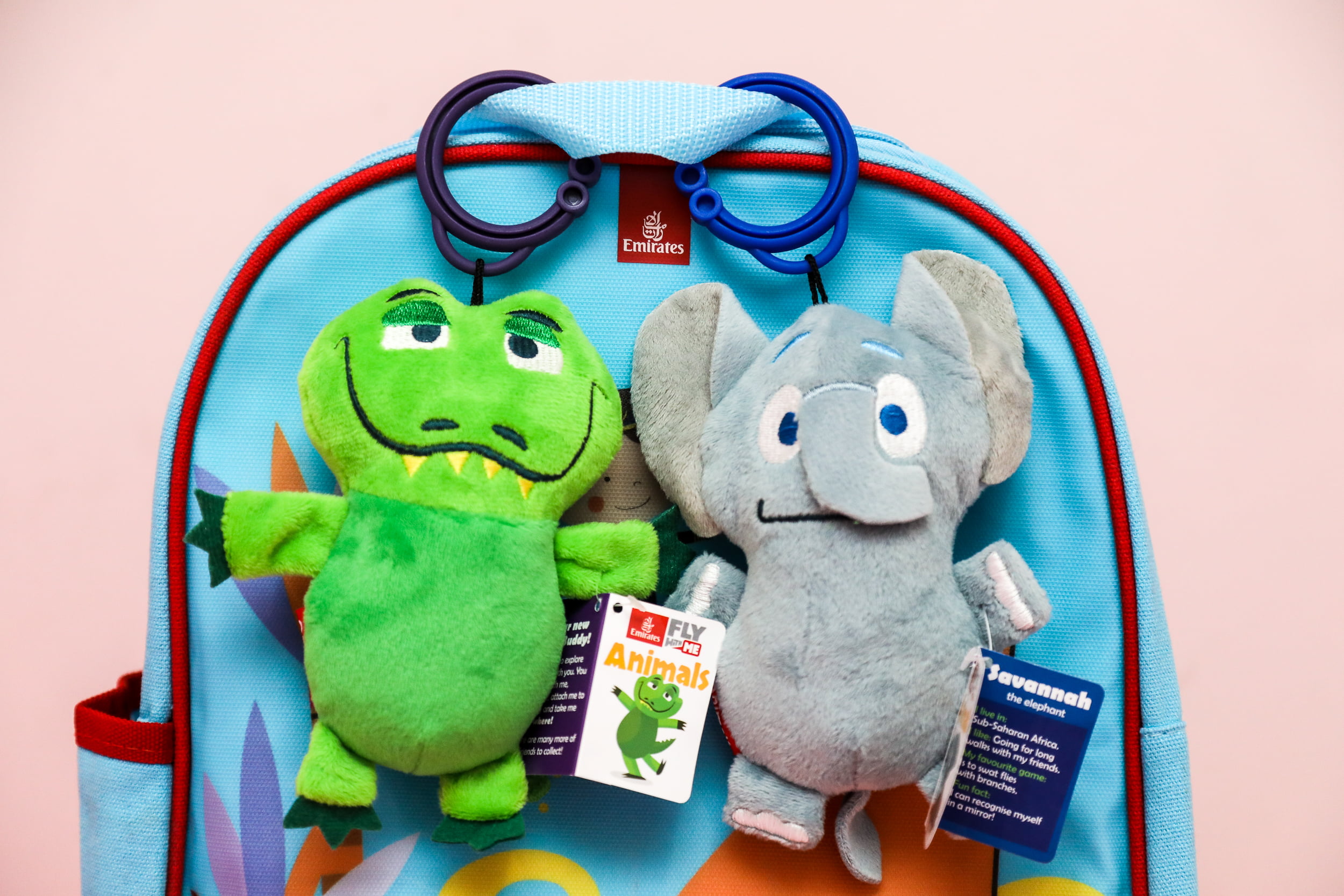 Emirates Airline - Fly With Me animals

Emirates has you covered for entertainment and toys on the plane as well though, if you don’t want to bring a lot of extra items from home.

“We also provide things on board to keep kids entertained,” Kelsey said. “We have the Fly With Me animals, and toys available on board that are complimentary.”

“We have four major animals that we’re always changing up, and the great part of that too is that kids get to learn on their flight as well,” she said. “We also partnered with Lonely Planet if you have older children.”

“And the other thing that we take pride in as well, is our ICE entertainment system. This entertainment has over 3,000 channels, and over 500 movies to help keep your kids occupied, so that you can enjoy the flight as well.”

Meals & Snacks
There are lots of other questions that you can look into before they leave their home too. “Parents can check first to make sure that there actually is a meal service,” Heather said. “On a long haul flight you’re going to probably have something, but you can get a sense of what it is, and if you’re traveling with a particularly picky eater, or a child who has a special diet, you don’t want to find out while you’re on the flight with no other options with you.”

“With Emirates,” Kelsey Johnson added, “we really try to optimize the travel experience for both adults and children alike. Speaking to this point in particular, Emirates tries to provide special kids meals, which can be ordered ahead of time, so if there is an egg allergy at the time of booking, if you let us know, we can make arrangements to accompany that. As far as amenities, baby food, that kind of thing, we do provide this on board as well. So, you can just speak to the flight attendants, and that’s something that’s available on request on these flights.”

Boarding Time & Take-off
Before boarding, Emirates Airline also makes it easier so you have time to settle in. “Emirates has priority boarding for families with small children,” Kelsey said. “And in Dubai, we actually have special family check in areas, so that’s something that you don’t have to worry about.”

“And of course, we should also mention, too, that we provide a smooth complimentary ride to and from the airport through Emirates’ Chauffer-drive service for Business and First class passengers. So, we try to make this experience a good one for our passengers on the flight, but prior to that and afterwards as well.”

First and Business class passengers also have access to seven lounges at the Dubai International airport, and 35 lounges around the world, and the spaces have areas for children to play in, and to keep them occupied.

Lastly, remember to have something for your kids to chew or drink during take-off and landing. Cabin pressure changes can be abrupt on the ears and can result in a lot of tears, especially for little ones, so a drink, gum for older kids, or even a bite of apple to chew can make a big difference.

Emirates Airline Helpful Links
Browse some of Emirates’ special offers, and check out some of their incredible toys for kids. Read more information on travelling with kids on Emirates. 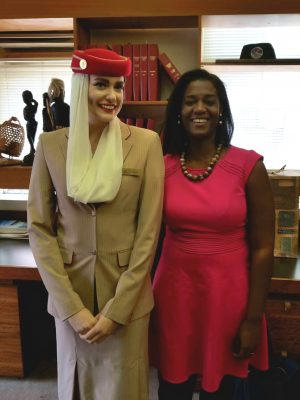 About Kelsey Johnson and Heather Greenwood-Davis
Kelsey Johnson has been an Emirates Airline flight attendant for two years, and she’s also a blogger with her site Lipstick and Luggage where she covers aviation, fashion, travel, and lifestyle. “Prior to that I worked in public relations, so I have a background in travel as well as aviation from that PR experience,” she said. Follow Johnson on Twitter @KelseyBelleDXB and on Facebook @LipstickAndLuggage.

Heather Greenwood-Davis is a family travel expert with 20 years of experience in the field, with experience in nearly 30 countries. “I have two boys, 13 and 16,” Greenwood-Davis said, “and we’ve been traveling with them since I was pregnant with the oldest, really, and we’ve done a lot. In 2011 we did a year long trip around the world, which is probably when they had the most long hauls.”

Greenwood-Davis writes for the Globe and Mail, National Geographic Traveler, and she’s on the Family Travel Association board.