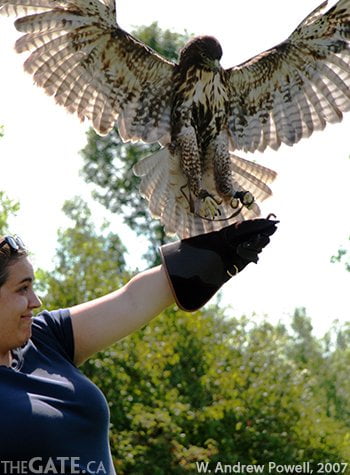 Hawks may not be that rare in Ontario, but few people see more than just a glimpse of them, and even fewer will have the opportunity to see these beautiful birds up close, or watch as one gracefully soars through the air. For those interested in falconry though the Wye Marsh is giving hopeful enthusiasts some personal time with a trainer and his birds as part of their new “Introduction to Falconry” workshops that are currently being offered on select Saturdays (including Saturday, October 13th, 2007), and it’s an opportunity that shouldn’t be missed.

During the summer my girlfriend Aisha and I took part in the course and it was easily one of the single most amazing things I’ve ever done. Birds have always fascinated me, so it meant having a chance to see if I could one day become a full-fledged (pun intended) falconer. On the other hand Aisha is somewhat terrified of birds, so while it proved to be a challenging experience for her, it was also a once-in-a-lifetime chance to get to know these magnificent animals.

Located near Midland on Highway 12, the Wye Marsh is a beautiful space that preserves a large expanse of marshland and gives families the chance to get to know the wildlife that live in the area. With Master Falconer Matt Lieberknecht as the teacher for the day, enthusiasts in the Wye Marsh falconry course get the chance to learn the history of the sport, train with the birds, and learn about the requirements and care that you need to know to become a qualified falconer.

Throughout most of the day we spent time with our birds on the glove, also known as the gauntlet, learning about their habits and traits, and the origins of falconry as well as the equipment needed and steps to becoming an apprentice. We learned, for example, that the sport can be traced back thousands of years, and most of the current equipment that’s used, and the way the birds are trained, hasen’t changed much since that time.

Although the birds used in the program were fairly young, generally only a few months old, they were already extremely well-trained and throughout the day we took them around the Wye Marsh on our gloves, a process that is part of training the birds so they will get used to be carried in- and outdoors.

The highlight of the day came in the afternoon when we took the birds out for a longer walk that included time to fly my bird, Merlin, who was the most experienced bird in the group. Because he was already fully trained I was able to release him and call him back as we walked through the woods. Although I had previously flown a hawk like this on a recent trip to Scotland, it was a much more intense experience to see Merlin take flight from my gauntlet, and to then be able to call him back in and watch as he soared down from the trees to land on my glove. 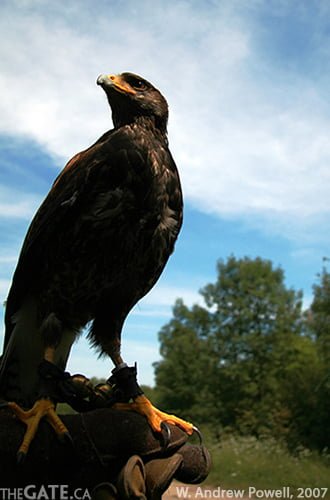 Some of the main birds that are used in the program include the Harris Hawk, a variety of different types of Peregrine Falcons, Red-tailed Hawks, Goshawks, and even some Owls. However, the favorite tends to be the Harris Hawk which has a temperment well-suited to working with humans.

It’s also interesting to point out that falconry is in fact a sport, although it can also be called an art. All of the birds used are raptors, or birds of prey that hunt game for their owners. Many do it as a hobby, but the key part to remember is that the birds are absolutely not pets, even if they are trained.

The entire day was all the more easy to enjoy thanks to Matt and his exceptional team of people, who make the day a lot of fun, and make sure you learn something at the same time.

What I think stands out about this program is that it’s really a great experience for anyone, no matter if they have experience with the birds or not. It’s directed specifically at people who are seriously interested in the sport, but bird fanatics will enjoy it as a way to get a taste for what falconry has to offer, while those thinking of getting more involved can decide if they’re ready to take the plunge and pursue their apprenticeship.

Introduction to falconry costs $106, with GST, and the next session is on Saturday, October 13th, from 10:00 AM to 6:00 PM. If you’re interested call the Wye Marsh at (705) 526-7809 or email them at [email protected]. You can also visit their website at www.wyemarsh.com for more details. Lunch is provided, but you’ll want to bring water, good footwear, a snack, a notepad and pen, and don’t forget to dress for the weather as you’ll be outside for most of the day.

Matt is the owner and operator of The Central Ontario School of Falconry. Visit him online at www.matt-thebirdman.com. 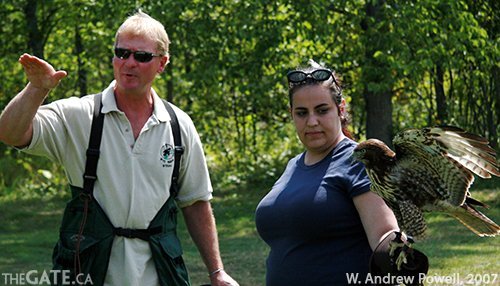