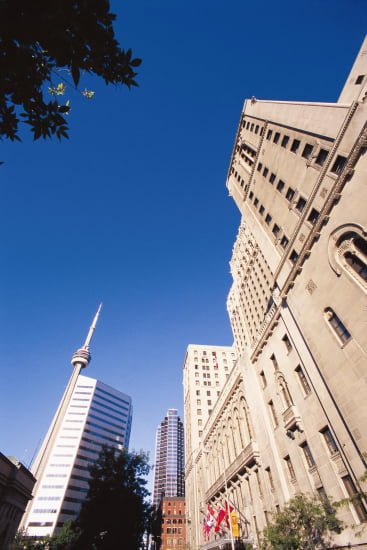 Living in a famous old hotel like the Fairmont Royal York can sometimes be likened to Alice In Wonderland – there is a swirl of lively activity that changes hour by hour.

For instance – a couple of nights ago I was asked to join the ace PR person here at the hotel (Melanie Coates) at a reception in the grand Prime Minister’s Suite on the 15th floor. The reception was being thrown by the personable and very friendly celebrity chef Ken Kostick and it was in honor of the wedding earlier in the day of his… chihuahua to another little dog.

The Prime Minister’s Suite is large and comfortable of course but not ridiculously huge like some big suites I have been visited in other, newer hotels are (what possible need do you have with four bathrooms and five televisions in one suite?). On this evening the Prime Minister’s Suite was anything but stuffy and political – the champagne was flowing, little dogs were scurrying around exploring, and the appetizers were delicious – the company was upbeat and the conversations were enthusiastic.

Back in the lobby I noticed a group of women that were all dressed exactly alike – they all looked stunning, all were gorgeous, all dressed in perfectly fitted red outfits with gold trim, they all wore a gold wrap on their heads that was loosely wrapped on an angle. There were at least fifteen such visions of beauty gathering in the lobby at the same time – they looked like a the chorus line in an expensive Broadway musical. Who were these women? They were in fact, flight attendants for Emirates Airlines.

Because this was Pride weekend here in Toronto – the hotel is also filled with visiting Pride celebrants. I have seen more than a few people strolling the halls and the lobby with hair dyed into the rainbow colours that have come to symbolize the Pride movement. In speaking with these visitors that have come from as far away as Ireland and as nearby as Hamilton – the common opinion is that the Pride parade is the best organized, most popular event that this city holds – period.

There is something incredibly social about living in a hotel – even if you are not particularly a social person you cannot help but be enveloped in the constant motion and movement of people in and out. The pace is quick here but not in the rat-race kind of way – the quickness here comes with an excitement and happiness. Visitors are on their way out to explore or are dragging their luggage across the lobby to quickly check in and get their adventure underway.

In the chapters to come I will explore the Fairmont Royal York in a manner that few get to see – this hotel that has been serving the discerning traveler for 80 years has seen all forms of the famous and the infamous – sometimes the famous and infamous being one in the same. Case in point – a nook high in the upper reaches of the hotel – in the sixties a rock band stayed here during a concert tour stopover. They were in this upper reach of the hotel for some publicity photos – while waiting for the lights to be set up the lead singer decided to carve his name in the wooden wall – the band was The Doors and the name carved in the wood high in the Royal York – Jim Morrison.