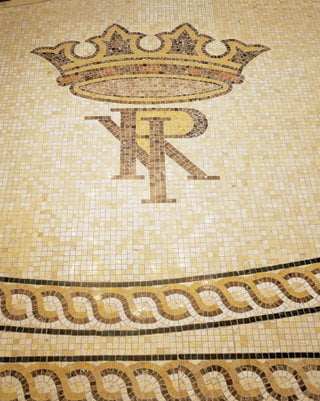 In the latest instalment of the great Fairmont Royal York Writer In Residence adventure, Christopher Heard takes a look at life in the hotel this week, and then wanders down the corridors of memory lane for a look back through his career as a writer.

I have been noticing over these last few weeks that a lot of folks from Britain and Scotland like to come to the Fairmont Royal York when on vacation here. I guess there is something comforting for them here as this hotel has also been the frequent stomping grounds of Queen Elizabeth and Prince Phillip as well (not to mention the term Royal in the name).

That is not the point I am making here, however. Yesterday in the lobby I spoke to a family from Manchester, England – mother, father, teenaged lad. We talked about the grandness of the lobby and I told them of my life-long love affair with the Royal York – but then the conversation turned to soccer – a passion I obviously shared with them. We talked animatedly about how my beloved Real Madrid has scooped their Portuguese star Christiano Ronaldo from Manchester United, not to mention both the Brazilian ace Kaka and the French sniper Karim Benzema. Our conversation was so animated that the family almost missed their tour bus!

Not three hours later, back in the lobby, I was speaking with another family staying at the Royal York for a first time visit to Canada. Again we spoke about the hotel itself and how warm and comfortable it felt to them. The father, with the colourful name Rodrigo, mentioned a phrase in Spanish that meant something like the hotel felt like returning to a comfortable nest. This family was here from Santiago, Chile. Our conversation also turned to soccer and also turned to the moves being made by Real Madrid – once again the conversation became very animated (I had an unfair advantage in that I had rehearsed this conversation earlier with the Manchester family).

The interesting thing about this is not my going on record with my love for the free-spending Spanish buccaneers Real Madrid – it is that in the course of a sunny summer afternoon in the lobby here I was able to speak to people from very diverse countries and cultures and discover we had a couple of common interests – this hotel and soccer. That is another fascinating element to hotel living – the world comes together here – literally.

Now to the memory lane story – this hotel, the Fairmont Royal York, also very literally, had a profound effect on my development as a movie critic and movie historian.

We had come here, my mother and brother and I, when I was fourteen years old for what is now called a “staycation”. We would enjoy this familiar old hotel, walk around town, go to book stores, that sort of thing. At the time the pay-per-view system of in suite movies was a bit different then – there was a menu on the television with a list of about eight different movies and the times they were playing. You used the remote to select a movie on the screen and pressed the order button – the movie would then come on – if you didn’t time it right it would come on half way through the movie – but you got to watch it over and over for the rest of the show times that day.

On this weekend I noticed that two movies I had been reading about (I already had a rather broad frame reference where movies were concerned, even at that young age) but could not see (at the time they were rated restricted, which meant if you were under 18 you were not admitted). One was Taxi Driver, the other was One Flew Over The Cuckoo’s Nest.

On the Friday night I ordered up Cuckoo’s Nest and sat in rapt attention as this magnificent film unspooled – I watched it twice in a row and was effected by the power of the writing and the performances against the harshness and bleakness of the setting. The next night I watched Taxi Driver and it freaked me out. The desolation and lurking violence and dread impacted me greatly. When recently teaching a film history course in a film school it struck me that when I was telling the students about those two films, it was my initial impressions of the films from those viewings at the Royal York that were still the way I felt about them.

To conclude with a poignant incident, I had just had dinner in my suite and wanted to go for a bit of a stroll before doing some writing in the evening. I headed down to the lobby and was about to head outside when I was stopped by a young couple.

The woman asked me if I knew the way to Harbourfront – coincidentally I was heading down there for a walk myself so I told them I would walk them there the quick way. As we walked and talked it turned out that they were a young married couple from New Jersey here to relax over the July 4th weekend. She mentioned that they had not been able to share a vacation together in a long time because they had been ‘deployed’.

I asked what that meant, whether they were military or foreign service? It turned out they were both Iraq war veterans – he had been in Kirkuk for 29 months – she in Tikrit for 26 months. I was filled with questions for them on the experience, but could see they were here to get away from all that they had been through – so we walked and just talked about the city and about the Royal York… I thought it best that way.