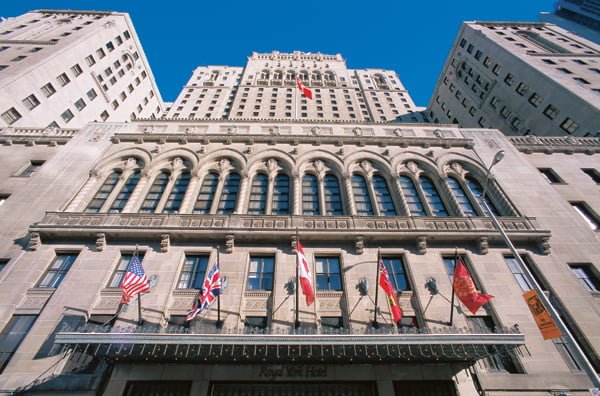 In fact a lot of films and television shows have used the Royal York Hotel as a shooting location or backdrop and there are a few clear reasons why this place is attractive to filmmakers. Ron Howard used this hotel, interior and exterior, when shooting his big budget boxing fable Cinderella Man with Russell Crowe. Howard told me on the set of the film one Sunday afternoon that he loved the hotel and was amazed that amidst all the bank towers and glass condos this hotel stood in all its authentic antique glory – which made it positively perfect for period piece recreations.

When the film Hollywoodland was being shot in the hotel (an underrated film about the mysterious death of the original TV Superman, George Reeves) I hung out with actor Ben Affleck for a while to interview him for a magazine. While we were just sitting around talking I mentioned to him that my grandparents worked here in the Royal York and I remembered my grandfather once telling me that he fell several stories and was injured while working as a window washer here.

Affleck then asked me what my grandmother did here – he asked me when the hotel was built, all the while looking around. He then said, “We have one of these great old places in Boston, on Boston Common.” Affleck is from Boston and the “one of these” he was referring to was a Fairmont hotel – I believe it is the Fairmont Copley Plaza he was referring to. The conversation then continued about the Royal York for awhile – then he was called away to be Superman again.

Besides the size, the unique configuration, the elegance and class of the place, besides the Royal York’s ability to co-star in a film set in the 1920s or the 2019s, there is one other distinct reason why filmmakers like to come here – and her name is Kolene Elliott.

Kolene Elliott’s job here at the Fairmont Royal York is to develop and cultivate relationships with film and television producers with the intention of having them bring their productions here. Kolene can often be found in Los Angeles or New York or London meeting with members of the international film community and her results speak volumes – the Fairmont Royal York Hotel has been used by everyone from Jackie Chan to Drew Barrymore to the Olsen Twins to Ben Affleck to Dustin Hoffman.

What got me thinking about this whole angle of life in this fantastic hotel was the recent DVD release of the season one of the TV series Hotel, which was based on the book by Canadian Arthur Hailey and written right here in the Royal York. Hailey, as I have detailed in a past entry, chose to fictionalize the hotel by calling it the St. Gregory Hotel and setting his 1965 novel in New Orleans instead of Toronto. Well, the series, which ran five full seasons from 1983 to 1988, switched locations again and placed their St. Gregory Hotel in San Francisco. My friend, Fairmont’s own Mike Taylor, then pointed out to me, to make the story even neater, the series Hotel was actually shot in the Fairmont San Francisco!

The series starred TV mainstays James Brolin (Josh Brolin’s father) and Connie Selleca and was a bit lighter hearted than Hailey’s book but still an interesting look at just how complex and crazy it can be running a hotel with the size and reputation of, based on Hailey’s original observations, The Royal York. The Fairmont San Francisco clearly had a lot of fun hosting the series – in 1983 when the show began shooting there they held a competition among their bartenders to come up with the perfect cocktail to celebrate the event. To this day the St. Gregory Cocktail can be ordered in the hotel’s Laurel Court Bar.

The Fairmont San Francisco is actually involved in an interesting promotion surrounding this DVD release. For the next year the hotel will show the two hour pilot series on their in room entertainment system for any guest that wishes to check it out and the DVD season one set will be available for sale at the hotel for guests that might wish a rather unique souvenir of their stay in a place that was immortalized on television.

Because of the many interviews and film and TV events I have personally conducted or been a part of here I have always associated this hotel with the magic of the movies. Now, upon reflection, it turns out that the movies find this place pretty magical as well.