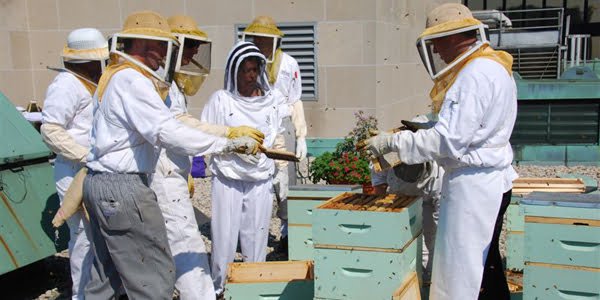 I have often mentioned in this series that life inside the Fairmont Royal York Hotel is a swirling microcosm of activity and life, and the closer you look the more intricate and fascinating that microcosm becomes, uniquely so here at the Royal York as that microcosm of activity reaches from the very sun-splashed rooftops to the convention floor canyons of stainless steel in the kitchens.

On a sunny Friday morning recently I found myself on the roof of the Royal York to join in the honey harvest. The honey from the many bee hives kept on the roof is extracted from the hives in a process I have no experience with, so had no idea what to expect.

What I witnessed was nothing short of magical. Professional beekeepers were there with a few dedicated experts volunteering in the effort, chefs from the kitchen were there, and Fairmont’s marketing genius, Melanie Coates (a serious beekeeper in her own right) was there. Everyone was decked out in white from head to toe, helmets and netting covering the head, face and neck, all sleeves and pant legs either tucked in or closed off with elastic bands, gloves covering the hands.

The process began with tin pots filled with combustibles that are set alight causing smoke to waft over the hives. This tricks the bees into thinking the hive might be on fire causing them to gorge themselves on honey and then get out of there. When this part of the process begins there is a cloud of buzzing bees flying around everywhere. When the bees all leave then the honeycombs are extracted from the hives and gathered up to be taken below to the kitchen where the next step in the process occurs.

I watched in utter fascination, not just the process but the respect that these beekeepers had for the little bees – respect that actually moved into a kind of well-justified reverence when you heard them speak of what was going on in the hives and how this all worked with a kind of natural purity that so few of us ever stop to notice anymore.

(Although I was stung by one of the bees on the neck, I did not take that personally. I knew he wasn’t after me – it was the Prada cologne I was stupidly wearing [not because it’s Prada, I kind of like that stuff] that he was investigating.)

The next step in this honeybee odyssey took place in the Royal York’s kitchens on the convention floor of the hotel – endless rows of fryers and utensils and ovens and counters and activity everywhere. The honey extraction operation was set up in the back corner and what struck me as wonderful about all this was how wonderfully low tech it all was. This is a hands on activity, a loving hands on activity – wax is gently sliced from the honeycombs to allow the honey to ooze out – then the honeycombs are put in an hand cranked centrifuge where gravity pulls the honey out and allows it to drip down through the filter and into the waiting container. 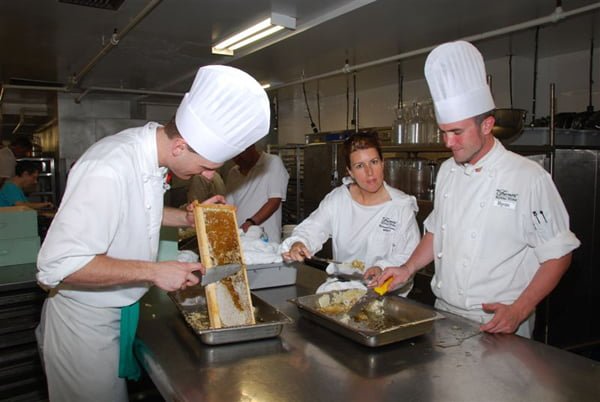 Melanie Coates urged me to take some of the honey soaked wax from the pan and eat it in its most natural state (or with a piece of cheddar that was also on hand) – I did so and what I tasted was nothing short of divine. I was joking with Melanie that I wasn’t sure if I had the words to properly describe the taste and feel of the honey as it slide down my throat – the word “sweet” doesn’t even come close – this Royal York honey, well, this Royal York honey is what Mozart’s music tastes like.

Another thing I noticed was that while this was work and serious business for these professional beekeepers, it was also rich and rewarding fun. As the honey was being extracted everyone was smiling – the bees have magnificently done their jobs and now their human partners in the operation were doing theirs.

As I was leaving the kitchen, after grabbing one last chunk of honey-saturated wax to eat for the walk out, I noticed something that at first appeared surreal. Amidst the activity in the kitchen, the blur of organized commotion, the cooks and chefs going here and there with their sauce-spattered aprons, the room service carts being rolled around everywhere, sat a large round table that was as elegantly decked out as if it were sitting in the middle of Epic restaurant. There were people sitting around the table enjoying what looked like a very fine meal indeed. The finest in silverware and wine glasses were being raised and the talk was in hushed respectful tones even though a giant working Royal York hotel kitchen was in running on all cylinders all around them.

It turns out that this is where you come to sample various aspects of the menu if you are planning a large wedding or party or gathering here at the Royal York. You can try out the various dishes, ask as many questions as you wish and make your plans right there on the spot with the help of the Royal York event planning experts.

Later in the day I was walking back into the Royal York through the grand lobby and noticed all the people scurrying about with their tourist maps heading out to explore – or the conventioneers huddled together going over itineraries and agendas, and I smiled broadly to myself. I wish they all knew what had gone on up on the roof and in the kitchen today – it would make them all appreciate this place even more. What I remember most about the Royal York honey harvest were the smiles that everyone had while they worked. The Fairmont Royal York Hotel just seems to naturally be able to do that to people from the rooftop to the basement kitchens and all elegant spaces and areas in between – it puts a smile on your face.