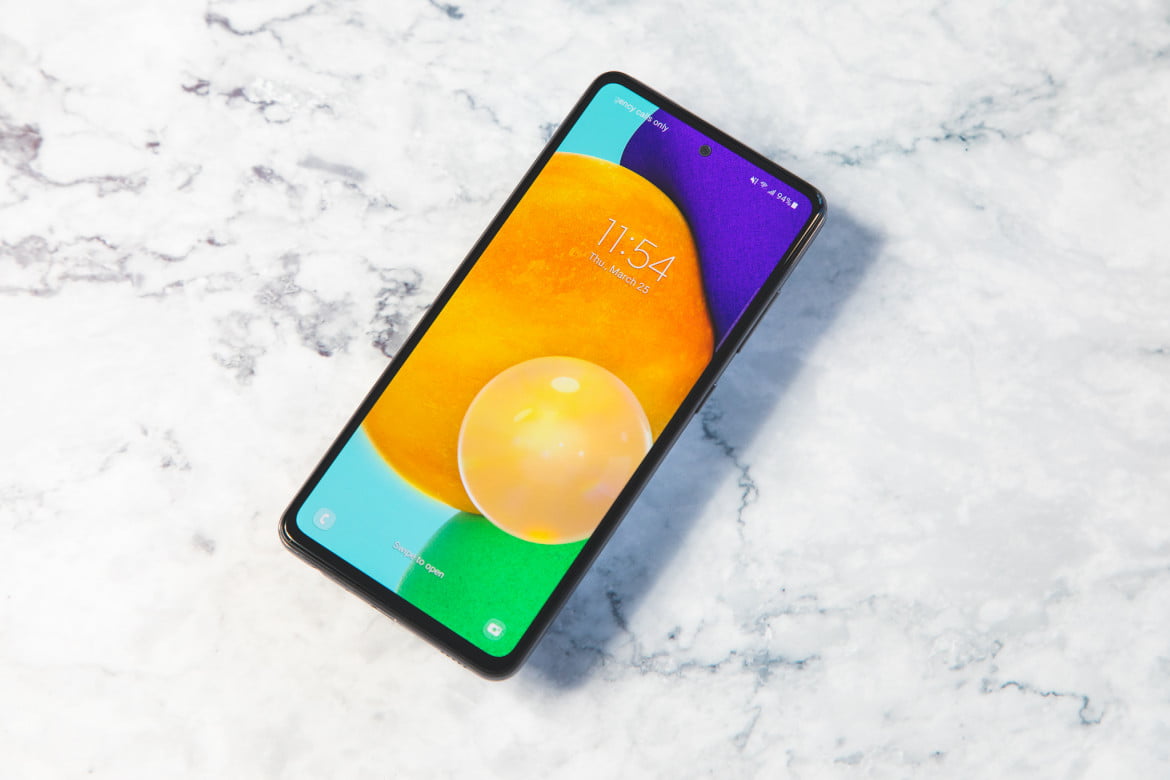 The Samsung Galaxy A52 5G is one of the best affordable smartphones you can find so far this year, and it gets all the features right for the market today. It has a big screen, it’s lightweight and looks sharp, and it’s packed with the functionality you expect from a Samsung phone.

Compared to last year’s A51, the phone looks very similar, but with a number of upgrades, and a few changes to the overall design.

Is this the right phone for you? I’m a big fan of the A series phones, and for most users, this phone does everything you want. Read on for all the details and for a few comparisons to Samsung’s other top phones.

The A52 fits perfectly between the designs we’ve seen with last year’s A51, and this year’s Galaxy S21 5G. I absolutely love the way the bezel frames the display with the perfect border to screen ratio for an affordable phone. The bezel isn’t as thin as some of Samsung’s high-end devices, but it’s good for the size of the screen, and doesn’t take away from the display either.

While the A52 only comes in one colour–Awesome Black–it is a great colour, and doesn’t look like the standard black I’ve seen in a lot of older phones. The colour changes in the light a bit, and looks slightly pearly. It’s very unique, but if you do want to add more colour, you can of course always get a nice case.

Like the other recent Samsung phones, the camera array sticks out a bit from the back of the phone, but it’s only a slight bump compared to the S21 or Galaxy Note 20 Ultra. The array also looks clean and orderly, compared to a lot of phones.

In terms of buttons, the phone has a volume rocker and a power button that you can hold down to access Bixby. In the settings you can also change the power button to just show the power off menu, instead, and you can change the double press action to either launch the camera, open Bixby, or open an app of your choice.

And otherwise the phone has a now-standard USB-C port, and a headphone jack for everyone who still rocks the “old school” headphones.

The A52 has a great 6.5″ FHD+ sAMOLED screen with a 120Hz refresh rate. That refresh rate helps make the whole experience feel smoother, and it’s ideal for gaming.

While the A52 doesn’t have the high resolution display of the flagship S21, the display is good, bright, and looks good overall.

If I had one early complaint, it would just be with the phone’s vibration motor makes the phone sound a bit unusual. I’d say I could hear the vibration more than in most phones, although sometimes, that could be helpful if you prefer vibration over having the ringer on. You can also adjust the vibration intensity, of course, so lowering that setting does help a bit.

Testing out the battery, having 4,500 mAh is essential with the screen size, and for most people running a lot of apps and doing a lot throughout the day. For me, running on an average day, I could get through a full day easily, and recharge the next day at some point. For some lighter users, I could see them getting even two days before they had to charge up again.

Sound on the Galaxy A52 was quite good, too, and a bit better than expected for a budget-friendly phone. Listening to YouTube Music and Spotify, the phone performed well, with a decent balance of tones that was richer than most competitors. Gaming and videos also delivered good overall sound quality for the value.

For a phone priced under $700, the Galaxy A52 has a great overall array of cameras, including a rear 64 MP camera, a macro camera, an ultrawide camera, and a depth camera, in addition to a front 32 MP selfie camera. All those megapixels in the main camera also mean the phone has a decent digital zoom, for getting nice and close on your subject.

Optical image stabilization and night mode features help offer improved image quality in a number of situations, and the phone shoots up to 4K videos for sharing, or watching on your big screen TV.

The images captured from the phone are nicely bright, have great depth and contrast, and I like the level of saturation that doesn’t generally need much tweaking.

The camera app also has a good range of modes, including Pro, Macro, Pro Video, and Single Take, as some of my favourites. I do wish that Director’s View was included, and that Samsung was rolling that S21 feature out to all their phones, but so far it’s not on their other phones yet.

Scroll down below for image samples from the phone.

Overall, for the price, it’s a good amount of camera functionality and the processor, with 6GB of RAM, feels speedy. With 128GB of storage space, it’s also enough space that you likely won’t need to delete anything from your phone for quite a while.

Looking at other functionality on the phone, I’m consistently impressed with all the features Samsung offers on their phones. That includes Link to Windows, for sharing files and so much more, as well as Music Share, Live Caption, Kids Home, and Call and Text on other devices.

On the flip side, it’s worth noting that the phone doesn’t offer wireless charging, although for many light users, that likely won’t be an issue.

The Samsung Galaxy A52 retails for $659.99 in Canada, and it’s available now from Samsung. For the price, the phone is versatile, with a good camera, and the kind of features that users will find useful from day-to-day.

The phone is a great recommendation for anyone who doesn’t need the most expensive phones, without giving up much. For students, older family members, and light phone users, it’s a great device that will easily last a number of years.

Image samples from the A52: