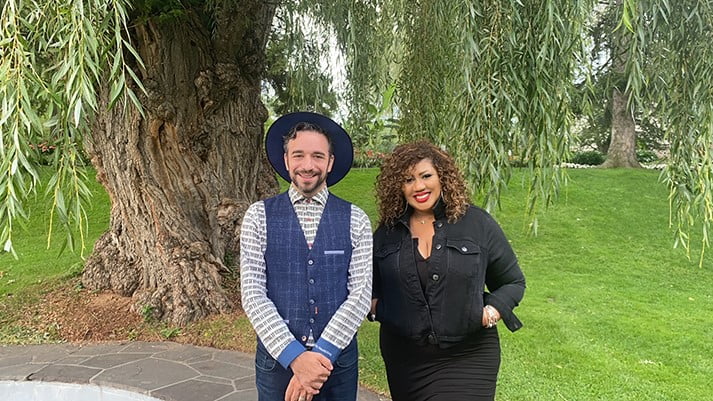 Trends come and go. Fads fire up and fizzle out. Technology advances. The times are always changing, and so is the soundtrack. Therefore, if reinvention is key to the unstoppable tide of progress, then multi-award winning Canadian jazz singer-songwriter Ori Dagan is right on top of a big new wave with his inspired reimagining of the ‘80s synth-pop classic, “Video Killed the Radio Star” — available now.

A duet with multi-award winning Canadian dance music vocalist Simone Denny, Dagan’s new single is much more than a jazzy take on tech. The update on The Buggles’ 1979 one-hit-wonder swings back in time to marry the big band ‘40s to the electronic ‘80s, giving birth to a bit of 21st century musical magic.

“I was looking for a tune to do this with when all of a sudden ‘Video Killed the Radio Star’ came on in a department store,” recalls Dagan. “I just thought, Eureka! Perfect!

“I love this song for being so prophetic, catchy and just plain fun.”

The inspiration didn’t stop in that department store, however; Dagan also wanted to ‘shop’ for the perfect singing partner to turn the song into a killer duet.

Then, Eureka again! Simone Denny, JUNO and MMVA Award winning vocalist, and former singer-songwriter for ‘90s hitmakers, Love Inc., was on his radar. “I met Simone Denny in 2019 at an event,” Dagan shares. “I remember nervously asking her to take a selfie together…

“Growing up, I loved her voice and songs when I was addicted to the MuchMusic Countdown. She has one of the most beautiful instruments in the business, as far as I’m concerned.”

How did the desire to sing with Denny turn into reality? Dagan simply ‘clicked right there’ on Denny’s Instagram account, and sent her a private message with his request.

“To my delight, she agreed to be part of this,” says Dagan. “Working with her in the studio was a real blast; she is a very generous artist.

“I have to confess,” he continues, “I had no idea if she could sing jazz because I had never heard her do it, but MAN she nailed every take! I loved feeding off her energy.”

While the innovative contemporizing of retro cover songs and jazz standards has become a signature for the Toronto-based, internationally known singer-songwriter, “Video Killed the Radio Star” is the sole reimagined cover Dagan includes on his upcoming and fourth studio album, Click Right Here. In addition to this bonus track, the album, Dagan’s first FACTOR funded project, also features 10 original jazz songs with the central theme of technology, and is set for release April 1, 2022.

Written and recorded over the last year and a half, Click Right Here has been a pandemic-inspired joyride for Dagan, putting the singer-songwriter and skilled improviser in the spotlight as a unique storyteller. Full of bright moments of humour and surprise, the new album highlights and reflects on the shortcomings of technology, the trappings of social media and other modern life blues.

Click Right Here isn’t the only creative project the very busy and energetic artist has taken on during the pandemic; Dagan’s online weekly live-streamed concert JAZZ IT UP has garnered over 1 million views collectively with episodes that have covered everything from traditional jazz icons Nat King Cole, The Rat Pack, Peggy Lee, and Louis Armstrong to songs of Disney, the 80’s, and the 90’s, to name a few. He has used the show as an opportunity to connect with viewers across the world, making new fans across Canada, the United states, Mexico, Brazil, Portugal and beyond, all while staying connected to his home base.

Dagan’s previous albums Scat Got My Tongue (2009), Less Than Three (2012), and Nathaniel: A Tribute to Nat King Cole (2017) have received critical acclaim and radio play worldwide.