Review: Biffy Clyro at The Garrison 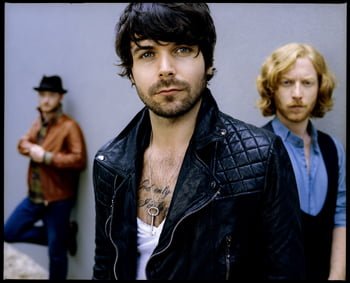 Live, Biffy Clyro sound exactly like their records. This is a trip, and worth mentioning, because their latest effort Only Revolutions is a blind and fearless leap into that monoaural 14th Floor Records sound that mummifies budgetrock ethos with their golden gospel. They do goonish, lairy pop that sounds like a Seventies rock rarity you just found in some Scottish yard sale, alive with crackle, gold-dust furring the needle and coaxing up some gauzy, soft-focus vibe where bum notes and musical primitivism are an aesthetic, an integral part of the group’s charm. And don’t ask me how, but in this sardine-can The Garrison in Toronto’s Little Portugal, rubbing shoulders until sparks fly with curious hipsters, gothy-punks, and those garage rock freaks usually found lurking at The Mod Club, Biffy Clyro perfectly translate their hi-fi charisma and dirty-vinyl warmth.

A healthy fetishisation of certain classic rock’n’roll elements aside, Biffy Clyro are a most deliciously alive proposition. They bundle onstage with scruffy hair, ratty beards, all tattoo’d and shirtless, giving us ample reading material in between songs. The vibe is Queens of the Stone Age meets Skinny Puppy, a near-psychotic happiness. Their songs are true vintage stuff, weird hard-vignettes, blasts of woozy drugadelia (“Booooom Blast & Ruin”) and charmingly lop-sided pop songs (“God & Satan,” “Know Your Quarry”). Their hooks are beautiful, misshapen things, as heard in “Bubbles,” burrowing into your brain like a television babbling absently while you sleep, or “The Captain,” with an off-kilter guitar lick like a warped, off-centre vinyl warble, a symphony of wow and flutter. Like I said, it’s fetishised, but in a deliciously subtle, knowing fashion, a loving pastiche leavened with wit. For recent single “Many of Horror,” a valentine set to street-busker guitar, frontman Simon Neil sings thoughtfully, locating some tender, innocent romance in his milieu of tattoos, sweat and an exquisitely summery laziness.

The sly self-consciousness pleasure of their songwriting over the course of five studio albums collides head on with the adrenaline rush of their live performance, the two guitar-toting fellas almost tumbling off the tiny stage in wriggling reverie, the barking drummer Ben Johnston invisible at the back: a fine chaos emanating from their general direction. The crowd sings every backing track. Hair is shaken, guitars thrust in the air and swung above heads in reckless fashion that still doesn’t upset the loose chime of their pop. With a helter skelter ricochet into the urchin-like mischief of the rock-pop template, snatching for golden tuneage with endearing, enthusiastic amateurism fraying their ends, Biffy Clyro don’t vacate the stage for two hours, to the sheer delight of old and new fans alike. My ears still ringing with their hazy, lusty, anarchic songs. Rock’n’roll hasn’t been plied with such dog-eared, homely and wonderful bonhomie since the last time The Pixies road into town, and Biffy Clyro are a similarly cherishable, riotous group.

Prepare to fall in love.