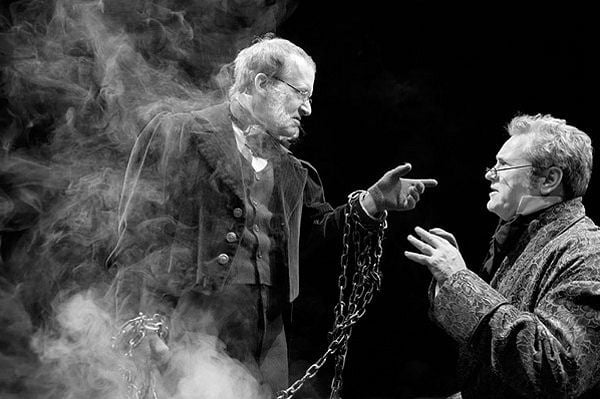 Joseph Ziegler and John Jarvis in A Christmas Carol

On until December 24
The Young Centre – 55 Mill Street

Creating a new version of any familiar tale can be a dangerous undertaking. The Charles Dickens 1844 classic, A Christmas Carol, falls into this category of beloved story that lives on through television movie reruns. But Soulpepper has created its own tradition, remounting a production every few years that is an absolute delight.

The cast from the 2006 production returns for this memorable evening of theatre, the fourth time in Soulpepper’s decade of existence that the company has performed A Christmas Carol. The result is a production that sets its own lofty standards, reinterpreting the familiar characters in a hugely satisfying way.

In the challenging theatre in the round (there are no bad seats) the scene changes and prop shifting are all on display. As a result, the furniture moving and decorating become graceful segues with the two harlequins pirouetting as they manoeuvre the scenery. Haley’s original soundscape for the production notches up the suspense and adds another weighty dimension to the spare set.

The show was adapted and directed by Michael Shamata, now artistic director at the Belfry Theatre in Victoria. Soulpepper founding member Joseph Ziegler fleshes out the iconic character of Ebenezer Scrooge with confidence, presenting us with a character who is proud of himself and his success. Marley and the spirits were played with a powerful, emotive, larger-than-life attitude by John Jarvis. Costumes were exceptional especially for the spirits – gold pantaloons for Christmas past, jolly red velvet for Christmas present and sackcloth and twigs for Christmas yet to come.

The rest of the cast was as reliable as Santa himself. Soulpepper veteran Oliver Dennis was sufficiently deferential and loving as Scrooge’s poor clerk. The Crachit children were professional and unaffected in their roles. And for crowd and party scenes there were enough characters to populate the stage properly.

I’m tempted to utter a humbug or two when the tinny jollities of a consumer-style Christmas are thrust upon me immediately after Hallowe’en in every department store. But I know there is hope especially after watching the children in the audience at Soulpepper. Every one was completely rapt watching the spirits take Scrooge on his magical tour. Cloaked in this kind of high quality theatre, Dickens goes down better than Disney for the young ones.