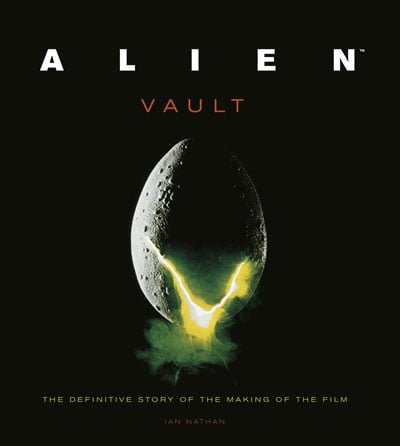 There have been few films in the last 40 years that have truly changed the genre of sci-fi and horror at the same time. The only one that can really claim such an honour is Ridley Scott’s 1979 sleeper hit Alien. From its ‘B-movie’ beginnings to having a multiple film franchise and several video games spinoffs, the film has claimed multiple successes. The tense and sometimes silent battle between a cold blooded killing machine and an unlikely hero, set in the deepest, darkest space, still manages to thrill and scare old and new fans alike. Here it has been meticulously deconstructed and explained in Ian Nathan’s Alien Vault: The Definitive Story Of The Making Of The Film.

The overall design of Alien Vault has been as carefully chosen. Set in its own hard slipcase, the striking imagery of the original Alien egg cracking open sits in the centre of a plain black cover. The front of the book has a picture of Sigourney Weaver’s hero, warrant officer Ripley, looking past your shoulder, while the back cover shows a side shot of a snarling Xenomorph. This gives the impression that the pages within will be a breakdown of the battle between these two integral characters.

However the book is not just a show and tell of rehashed material, there is also a plethora of exciting treasures for the biggest fans. These include detailed blueprints of the Nostromo, Polaroid’s from the set, reproductions of the hauntingly brilliant designs from H.R Giger, showing early concepts for the films alien aspects and Ridley Scott’s own annotated storyboards, recreated for this very book. All the extras are stored in their own vellum envelopes attached to the pages, adding just that bit more class to an already impressive book.

The book is split into five Chapters; Birth, Nostromo, Perfect Organism, Ripley, and finally, Legacy. Within these carefully chosen chapters lies the sort of detail only someone with a passion and admiration for the film could achieve. Each chapter’s title is a fundamental element to the film; however this should not suggest that in that chapter the only subject covered is that of the title. The chapters cover a multitude of interlinking subjects that went into creating the character or integral part of the film.

Nathan does not allow the book to read as just a behind-the-scenes story, but more as a collection of carefully chosen accounts and recollections. He offers up varying points of views on the same story that leads to the reader understanding the situations and really feeling like they are being given a private insight into the creative process.

For those fans who love the more technical aspects of the film, such as set construction, costume creation, and early animatronics, there is plenty of information detailing how the various items were designed and the problems arising from such complicated ideas and the methods employed to get around the processes.

Alien Vault doesn’t just focus its attentions on the most memorable scenes, like the chest buster, or the first time we see the Xenomorph. While he does go into detail on those scenes, Nathan gives plenty of page space to the smaller and less dramatic moments of the film. It is this perfect balance that makes the book feel like nothing has been overlooked. He demonstrates that without the quiet and scene setting moments, the bigger and more horror filled moments wouldn’t be as poignant or impressive.
The author combines images from the final film and from the sets to enhance and visualise what could otherwise become confusing and wordy anecdotes. Quotes from the cast and crew help bullet-point and emphasise key moments throughout the book.

Alien Vault is not just a book that shows the backstage pictures and talks about them at length, instead it offers perhaps the most detailed and well-rounded account of the film and the filmmaking process. Nathan offers up a cinematic passion, coupled with an informed and well researched documentation, into the creative hard work and many changes that made Alien the success it is. Alien Vault is exactly what it says it is: The Definitive Story Of The Making Of The Film.