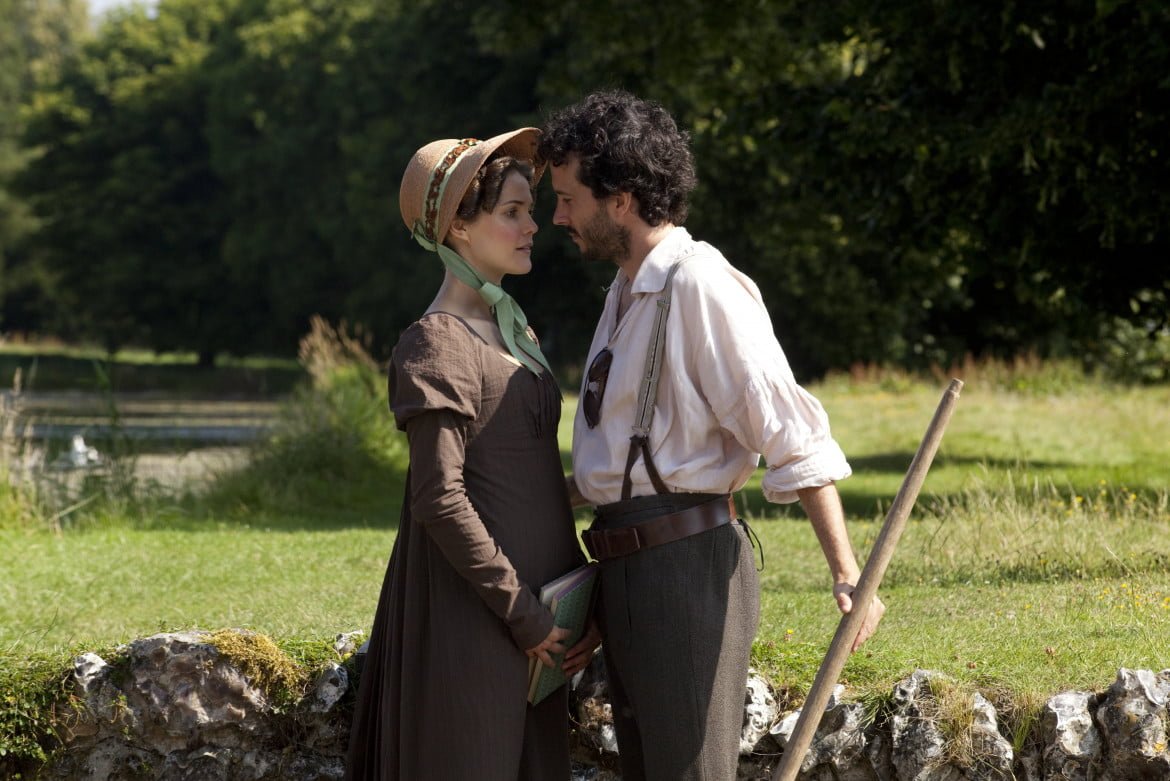 Sundance review: High Camp at Pemberly with the premiere of ‘Austenland’ 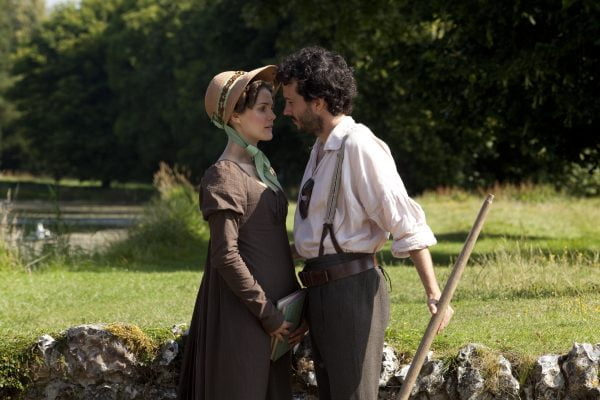 Austenland, based on the popular book of the same title by Shannon Hale, is the hilariously conceived meta-rom-com about Jane (played by Keri Russell), an obsessive fan of Jane Austen and all things Regency-era, who spends her life savings and sells her Toyota to go on vacation at Austenland.    Jane wants to experience Austen’s world just once, and has failed miserably in real-life romance. One presumes this is at least in part because her life-sized cardboard cut-out of Colin Firth as Mr. Darcy is a bit of a turn-off to would-be suitors.

Austenland is over-the-top in every way.  Run by Mrs. Wattlesbrook (Jane Seymour), who has hired actors to play Austenian heroes to her vacationing female clients, Austenland feels at times like a bad Bed and Breakfast. When we first enter Mrs. Wattlesbrook’s  “orientation cottage”, where guests relinquish their modern accoutrements before heading to the manor house, the interesting slippage between reality and fantasy commences.  Which of the customs are “Regency” and which are affectations of the actor-character’s own egos and personalities?  This question is highlighted by Miss Elizabeth Charming’s (Jennifer Coolidge) ignorance of anything Austen, aside from the fact that she “Just wants to wear one of those ‘wench gowns.’”  Her lack of concern for authenticity points up just how ridiculous the whole quest is.

As the foil to Russell’s Jane, Coolidge makes no bones about the fact that she’s there for the hot actors with British accents.  Her accent is way off (she puts on a broad cockney) and her attention is not on how many lumps of sugar she can appropriately take, but on making eyes at the man she wants to woo, one of the best actors in the crew, the fantastic James Callis, playing Coolidge’s counterpart as Colonel Andrews. 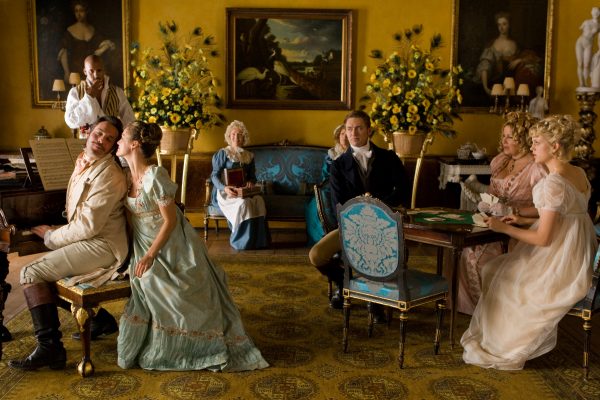 When Jane arrives for her vacation, she discovers that, having bought the “copper package”, she gets to play a poor orphan taken in by her wealthy cousins, wear a dull brown dress that exposes no cleavage whatsoever, and to stay in the servants’ quarters (here she becomes more of a Bronte heroine than an Austen one—not to nitpick).  She finds that her role in her fantasy vacation is a little too close to her real-life situation—a mousy, overlooked minor character in her own life.

Of course Jane eventually turns this around and emerges as the full heroine of the story.  Russell’s counterpart, the smoldering and unhappy Mr. Henry Nobley, is played with convincing (and adorable) morosity by JJ Fields (here’s to hoping Fields gets his chance as a new Austen heart throb).  In a Q & A following the film’s premiere, Fields said that Ms. Hess was an “actors director” who gave the actors ample reign to do their thing.  This latitude with the actors worked particularly well with Fields, Callis, Bret Mckenzie (Flight of the Conchords), and Georgia King, who were all able to develop broadly comic characters with shape and nuance as well as a healthy dash of physical comedy.  Though Coolidge is, as always, hysterical and appealing, her high camp could have been a tad more restrained.

One of the fun things about this movie was the chance to see female actors in slapstick roles, with the male actors playing, for the greater part, the straight men.  When I asked Ms. Hess what she thought of all the female energy in the film, she laughed and said, “Well, men get a bad rap sometimes, but they can be helpful at balancing the high emotions of women.”  This was true of the characters in the film as well. 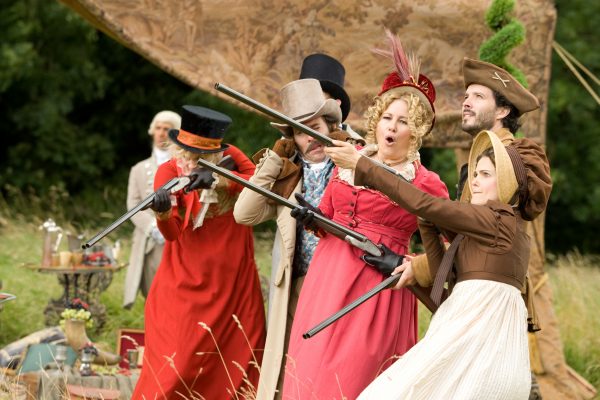 Austenland is an extremely clever play on our dearly held expectations for romantic comedies.  The twist at the end is brilliant as it both satisfies expectations and critiques them at the same time.  Hess and Hale should be commended for making this interesting commentary (commentary is not their main purpose at all, but it’s there nonetheless) on genre and romance in a film that will also probably sell alot of tickets.

In the end, Mr. Hess is right.  This film is way more commercial than Napoleon Dynamite or Nacho Libre, and the women behind the film promise to emerge as a powerful team.  Austenland was produced, written, and directed by a trio of Mormon women, Hale and Hess, from Salt Lake City, and Stephanie Meyers, of Twilight fame, from further south in the Mormon belt, Mesa, Arizona.  This team illustrates that the year of the Mormon, which many thought would end with Mitt Romney’s bid for president of the United States, may not quite be over yet. (We’ll see if this might also be the year of the female director, as Sundance wraps up next week.)

As of Sunday, three production companies were vying for a deal that would “mark Sundance’s second major sale [this year] of a narrative feature,” according to the Hollywood Reporter. 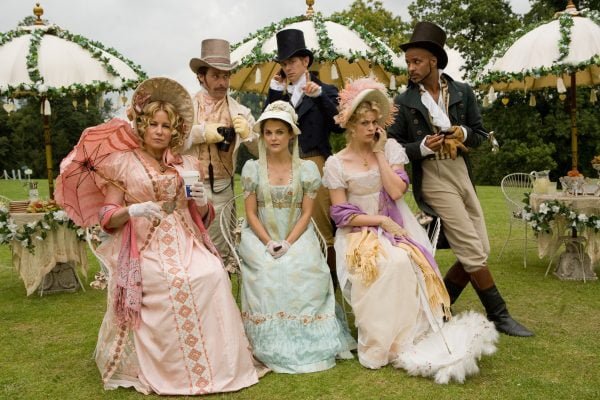 Lara Candland is a poet, librettist, screenwriter and blogger. Her book of poems, Alburnum of the Green and Living Tree is available online, and she is widely published internationally in literary journals. She was a finalist for the Sundance Screenwriter’s Institute last year, and her opera Sunset with Pink Pastoral was shown at Sadler’s Wells Theatre in London. She is also part of the duo Lalage, with her husband, composer Christian Asplund, featuring her poetry sung and read with live electronic voice manipulations. Candland is also an avid cook. She blogs almost daily at Girls in a Tight Place.