The compact, tense, and claustrophobic thriller Don’t Breathe will give horror fans in the mood for some clever scares and constantly foreboding tension something worth raving about for a bit.

A crew of three young, but semi-professional burglars (Jane Levy, Dylan Minnette, Daniel Zovatto) operating out of Detroit think they’ve found the one big score that could get them out of their downtrodden, economically impoverished lives for good. They’re tipped off that a blind Army veteran (Stephen Lang) might be sitting on $300,000 in settlement cash stemming from the death of his daughter. It seems like an easy enough heist. The blind man lives in a fortified home, but it’s the only inhabited and well maintained property in an otherwise dilapidated and abandoned neighbourhood (of which Detroit sadly has many), meaning witnesses are at a minimum. Things get out of control in a hurry, the blind man boards up the windows, and locks everything from the inside to make sure he catches all the thieves, and the homeowner has a deep, dark secret hiding in the basement.

With only his second feature, Uruguayan filmmaker Fede Alvarez gets to step out a bit more with Don’t Breathe than he did with his North American breakthrough, the divisive remake of Evil Dead from 2013. Once again re-teaming with his Evil Dead star Levy, producer Sam Raimi, and co-writer Rodo Sayagues, there’s a looseness and spontaneity to Don’t Breathe that Evil Dead lacked, and watching Alvarez swing for the fences on more or less his own terms happens to be a lot more fun. Instead of trying to craft an original spin around a story horror fans already know and love, Alvarez gets a chance to share some of his other favourite genre tropes for a streamlined spook show that knows precisely what it wants to do and how long it will take to get it done.

It’s a pretty simple stalk and slash thriller, albeit with a low body count and a maximum amount of bodily harm to the principal characters involved. Anyone who has seen the trailer for the film already knows how the plot gets kicked off, and while that’s a shame, it’s easier than trying to sell the film as a sort of forced love triangle among three characters with different reasons for wanting to leave Detroit. Levy gets to play the sympathetic one, trying to steal a better life for her little sister and save her the torment of living with their drunken mom and mom’s white supremacist boyfriend. Zovatto gets to play the loose cannon of the gang. Minnette plays the unrequited lover and probably got hired because when his character is terrified his reaction shots are near priceless. They’re terrorized by Lang (looking here like a cross between Kevin Nash and Neal McDonough), another villain with a tragic backstory that has driven him to madness. The characters and their relationship to each other won’t matter once the action starts, but it’s nice that there’s something included here. 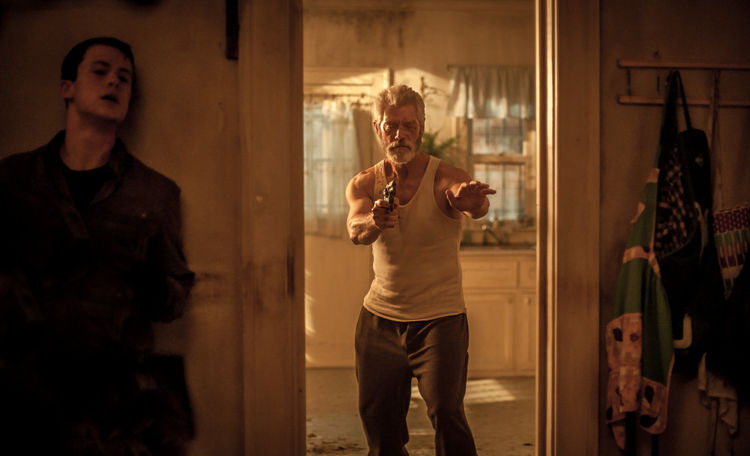 Don’t Breathe subscribes at the same time to the belief that “less is more” and “more is more.” When it comes to plotting, pacing, and character, Alvarez gives viewers only the necessary basics to enjoy the terrors to follow. In terms of piling up the scares, however, Alvarez maintains a relentless pace once the heist goes south. It does build to a film that has more false finishes than a professional wrestling title match, but also to some genuinely creative set pieces, most notably a pair of scenes happening at the same time involving a guard dog in an air vent and a precarious looking skylight. Alvarez uses a lot of long takes early on to show the viewer the layout of the blind man’s house, but instead of cutting away once the mayhem begins, Alvarez continues to shoot his film as ambitiously as possible. He knows that the audience is paying attention and that if he shows them a shot of a hammer that lingers for a few seconds longer than normal that they’re going to expect it to be used. It delivers fast paced scares, but also rewards patience. Considering that much of the film’s tension comes from awkward silences, that’s a great choice.

Alvarez isn’t afraid to wear his genre influences on his sleeve, and the results are genuine and unforced. Two of the most memorable set pieces in Don’t Breathe are ripped off almost explicitly from Pitch Black and Cujo (both of which I see as stealing from the best). There’s no self-reflexive covering for it, but rather a take-it-or-leave-it sort of attitude that suits Alvarez well. Also, much like he showed with Evil Dead, he’s not a filmmaker afraid of getting a bit crazy and potentially off-putting down the stretch provided that he gives the viewer something a bit more cathartic once the terror subsides.

About the only thing that rubbed me the wrong way was a key revelation about what the blind man was keeping in the basement. Things take an unnecessarily sleazy and gross turn towards the climax for a moment, which is a shame because Alvarez was doing so fine with tension and suspense that the shock moment strikes as excessive and unnecessary. Outside of that, Don’t Breathe is a solid all around chiller custom made for teens starved for actual horror movies.

Check out the red band trailer for Don’t Breathe: