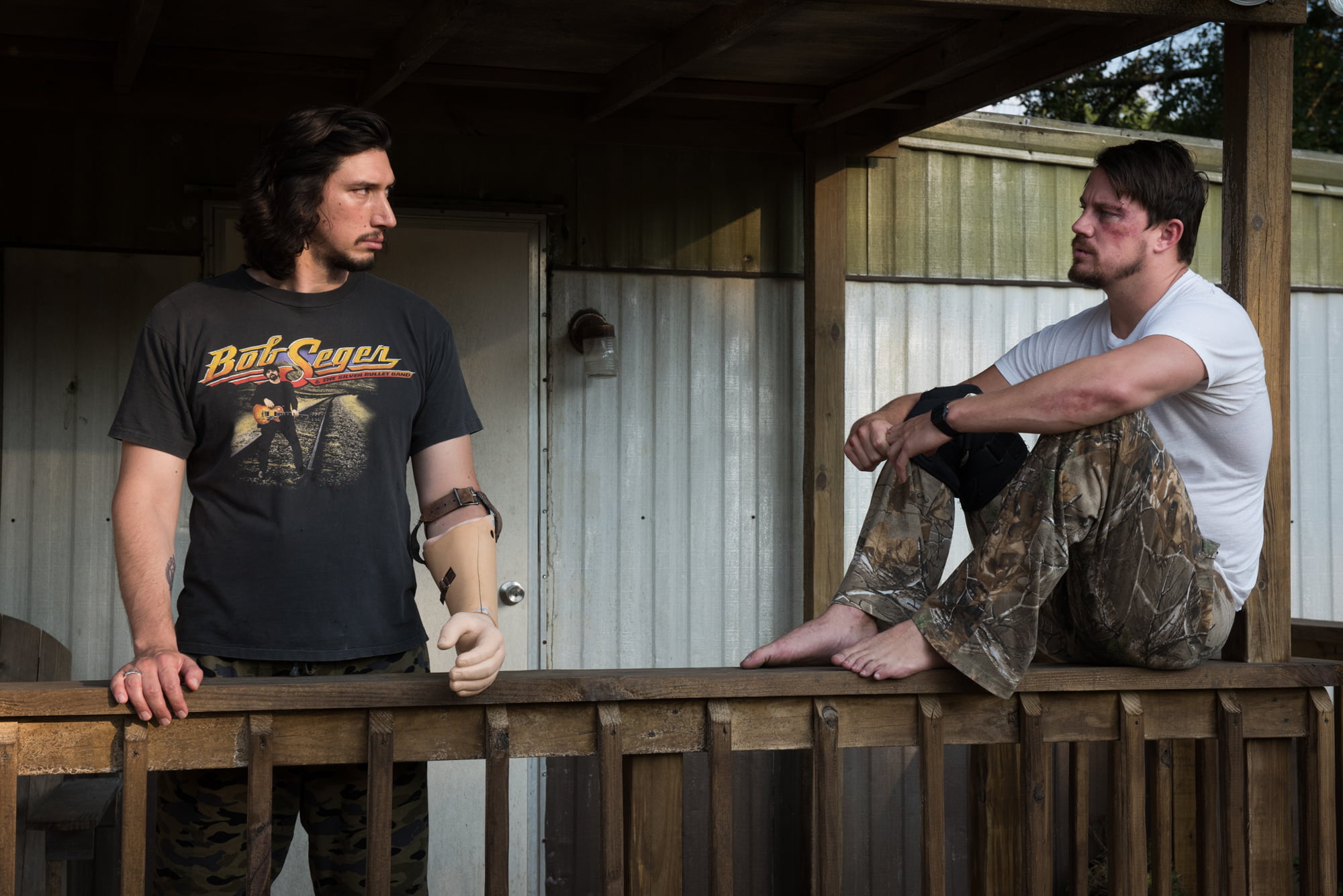 Logan Lucky, director Steven Soderbergh first film after stepping away from the big screen for several years, is an odd duck. Tonally strange, it falls somewhere between a mainstream blockbuster and avant garde restraint. The story is a classic sort of heist caper that could be played up for maximum broad effectiveness (a la Soderbergh’s Ocean’s films), but instead it’s played straight with nary a wink or nod to the audience. It vacillates wildly between outlandish silliness, dry humour, and high drama, speeding up or slowing down whenever it feels like it. As a result of such shifting, Logan Lucky is an uneven movie, but also a thoroughly fascinating and consistently enjoyable one.

Jimmy Logan (Channing Tatum) is a struggling labourer with a bum knee from small town West Virginia who recently lost a gig in North Carolina repairing sinkholes that have been developing beneath the Charlotte Motor Speedway. When his domineering ex-wife (Katie Holmes) tells Jimmy that she’ll be packing up and moving with her new husband (David Denman) and taking their daughter (Farrah Mackenzie) to Virginia, he feels threatened enough to enact a grand scheme to make their distance seem like less of a problem. Jimmy enlists the help of his one-armed, war veteran, bartender brother, Clyde (Adam Driver), and his younger sister, Mellie (Riley Keough) to help plan a heist of the speedway. Thanks to his previous job at the track, Jimmy already knows the door codes, venue heist protocols, and the location of the vault containing all the cash. The first step in their master plan is breaking eccentric explosives expert Joe Bang (Daniel Craig) out of prison, but when the construction gig serving as their cover begins to wrap up earlier than expected, Jimmy and his crew are forced into executing their unlikely heist earlier than expected on Memorial Day weekend during the Coca-Cola 600, the longest race of the NASCAR series calendar. Skeptical Clyde is convinced that the plan will fail, pointing to the family’s history of rotten luck, but Jimmy presses on even when things seem at their worst.

Written by “Rebecca Blunt” – quotation marks used because it’s heavily rumoured to be a pseudonym for someone that Soderbergh is keeping hidden – Logan Lucky has all the trappings of a caper comedy: unlikely heroes trying to pull off an improbably task that seems well above their intellectual level, colourful characters, a high stakes setting, and a number of turns that make the Charlotte Motor Speedway look inadequate by comparison. It sounds like the set-up for a stylish comedy given the cast and filmmaker involved, but it isn’t. Those expecting a laugh-a-minute buddy picture will be surprised to find out that the only chuckles to be found are courtesy of the cast playing their roles relatively straight. Those expecting a fast paced caper will be shocked by how slowly many of the film’s sequences unfold and how many seemingly inconsequential asides transpire that may or may not be going anywhere. It’s still silly, and it manages some thrilling, suspenseful moments of tension, but overall Logan Lucky might be the most laid back and relaxed heist film in cinematic history, and it’s not trying to appear too cool for school while doing it.

I’m tempted to say it’s like watching a play by Tracy Letts or Sam Shepard filtered simultaneously through the sensibilities of the Coen Brothers and Soderbergh’s past works, but that still doesn’t fully describe the tone here. There’s a lot to unpack for such a seemingly inconsequential film, and not merely because of the elaborate final act reveals. It’s a film about never underestimating people and not believing in bad luck that moves in stereotypes and sometimes convenient plotting. It’s a goofy comedy that also has strangely serious economic and ecological subtexts. It’s a film that features Brit stoic Craig adopting a silly southern twang and somehow casts Seth MacFarlane as a douchy energy drink magnate with a laughably fake English accent. For every serious moment that feels sometimes uncomfortably realistic and dramatic there are scenes revolving around extended Game of Thrones based banter and quips about exorbitantly high beer prices at sporting events. For the most part, it’s a quiet film filled with people talking in otherwise silent locations that occasionally allows itself to have a bit of fun to play an instantly recognizable country or classic rock track. Outside of Soderbergh’s trademark visual style and mastery of making even the strangest of shots symmetrical, Logan Lucky never sticks to single tone or setting. Usually that spells disaster for any film that’s trying to be entertaining, but here it’s almost an asset. 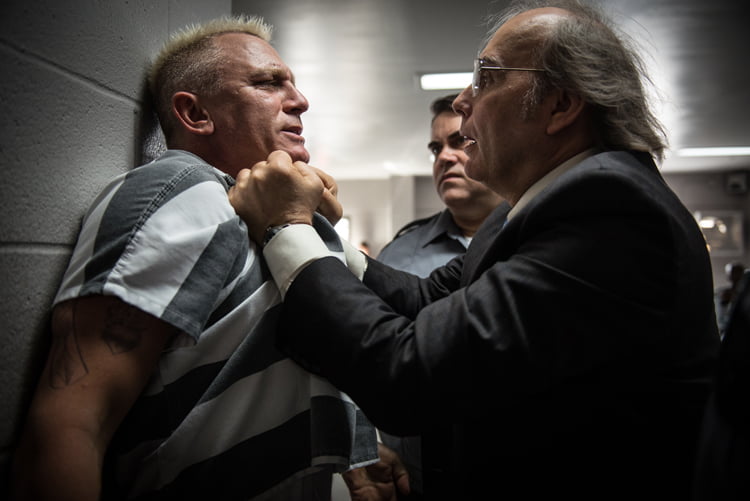 Tatum (who showcases a previously untapped penchant for deadpan character work here), Driver, and Keough have exceptional chemistry together, and most importantly the budding criminals are wholly sympathetic throughout. Yes, they’re doing a bad thing by robbing something repeatedly referred to in the film as an “American institution,” but there’s never a sense that these are bad people. They’re desperate and more than a little quirky, but there’s a sensitivity to them that makes them heroes worthy of audience investment. Even Craig’s outlandish Joe Bang and his doofus accomplice brothers (Jack Quaid and Brian Gleeson) come across as somewhat endearing. MacFarlane and Dwight Yoakam (as an oblivious prison warden) are the only character playing outright jerks, and even they’re more pathetic than contemptible. Logan Lucky is an ungainly film that keeps the viewer’s attention by remaining jovial and welcoming instead of dark and distancing or sarcastic and over-the-top.

Not all of it works, though. There are some sections of Logan Lucky that seem underdeveloped or cut down from a longer version of the film (which might be good because it already feels too long its current length). Katherine Waterston is wasted as a good natured doctor and potential love interest for Jimmy in two underdeveloped scenes. Ditto Hilary Swank and Macon Blair showing up for a wonky, tacked on fourth act as a pair of FBI agents trying to piece together what happened at the speedway. Even a subplot with MacFarlane and Sebastian Stan, playing a NASCAR driver sponsored by the energy drink baron who literally compares his body to a computer operating system, doesn’t have much weight and could largely stand to be cut without damaging the rest of the film. Also, for a film that tends to eschew sentimentality, building to a clichéd “daddy has to make it to his kid’s recital” climax feels a bit twee.

Logan Lucky and its characters march to the beat of their own drummer, and although they sometimes lose a sense of rhythm, it’s hard not to be charmed by them. It’s a familiar kind of story told in near experimental fashion, making it far more daring than the average summer blockbuster. I would hesitate to say that this puts the returning Soderbergh back at the top of the filmmaking game, but it’s nice that his comeback is weird and strange rather than a fence swinging bit of art or commerce. Logan Lucky is content to just sit back and have a good time, and it goes down like a cold drink at the end of hard day’s work.

Check out the trailer for Logan Lucky: