Review: ‘Hollow in the Land’

Better as a dark family drama than as a twisting mystery, the Canadian indie-noir Hollow in the Land has just enough great ideas to be intriguing, and a commanding lead performance from Dianna Agron that’s memorable enough to make it more than worthwhile. A backwoods tale of murder, intrigue, and bad behaviour produced in the style and tenor of Winter’s Bone, the debut feature from Canadian writer-director Scooter Corkle won’t win too many points for originality or simplicity, but it wisely puts more emphasis on everyday people in awful situations than it does on its often unnecessarily convoluted story.

Alison Miller (Agron) works at a BC paper mill in a blue collar town to help support her troubled seventeen year old brother, Brandon (Jared Abrahamson), after their father is sent to prison for a botched robbery that killed the son of the mill’s wealthy owner. Alison’s brother constantly gets into scrapes and hangs out with a rough crowd, but try as she might to talk sense into the boy, the more responsible of the siblings can’t get through to him. When the ne’er-do-well father of Brandon’s girlfriend is murdered, Alison’s brother goes missing and is presumed to be the chief suspect. With all the evidence seemingly pointing in Brandon’s direction, Alison sets off on a quest to make sure her brother is safe, while simultaneously trying to unravel the question of who else could have committed the murder.

Hollow in the Land plays a bit like watching a board game unfold. Alison interrogates, threatens, and shakes down various people who last saw her brother in the flesh and the murdered man while he was still alive. Alison bounces from suspect to suspect to find out what they know, eventually coming to the conclusion that pretty much everyone in the town has a secret to hide and most of them had motive and opportunity to kill the victim and/or frame her brother. Watching Agron rankle the unhelpful and unfriendly townspeople offers some degree of dramatic satisfaction, but Corkle drags an otherwise well realized premise by adding too many names and faces to the suspect list.

While Hollow in the Land tries to make everyone look like a suspect in the murder, there are a finite number of people who could have credibly committed the act. It’s also one of those films where the most obvious suspect is clearly going to be the person that Corkle and company haven’t delved into a lot. Corkle throws a lot at the audience – none of it really helped by cinematography in the film’s evening set first half that’s so murky that most characters look and sound like the same person – and any savvy viewer will know that most of it won’t matter. Corkle admirably tries to tie all of his threads together via a convoluted conspiracy, but the ultimate identity of the killer is a reveal that’s both obvious and easy to explain without trying to bring in ancillary characters that don’t add much texture to the story. The big reveal is one that can be figured out early on by asking the simplest of questions to one of the characters closest to the protagonist, and naturally it’s never asked by Alison until the last possible moment. 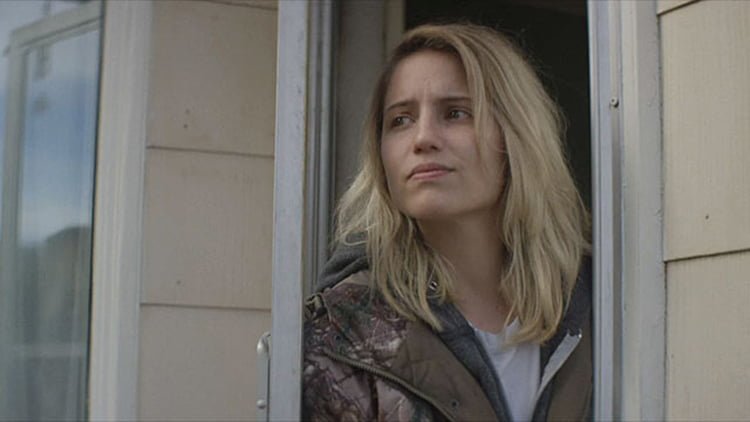 While Corkle strains to make Hollow in the Land into a grand mystery, he shows a deftness and intelligence when it comes to the construction of the film’s story of family conflict. Agron’s performance, the best in her young career thus far, cannily balances grit and sympathy, making Alison into an inherently likable protagonist worthy of audience investment. While the story beats the character finds herself placed into might be somewhat contrived or convenient, the character’s righteous quest to do what she thinks is the right thing is driven by the narrative’s strong moral engine, which is personified nicely through Agron. Corkle could have done away with a lot of his red herrings and swerves because Agron’s subtle, but powerful character work would have been enough to sustain viewer interest.

Corkle also gives Agron plenty to work with by giving the film a naturalistic, small town feel instead of trying to make the film play like it’s the story of a gumshoe plunked into a Podunk, backwater community. Agron’s few scenes with Abrahamson set the stage for the tragedy to follow, and moments Alison spends with her on-again-off-again lover/daughter of the murder victim showcase some nice chemistry between Rachelle Lefevre and Corkle’s leading woman. Michael Rogers and Shawn Ashmore make the most of what could have been a pair of throwaway roles as the skeptical police chief and a kindly beat cop, respectively. Corkle also peppers the film with plenty of local colour, shooting in his hometown of Castlegar and using some area residents as extras. Even if the mystery strains believability, Hollow in the Land always feels lived in and assured when it comes to its setting and characters.

Corkle might have over-thought the mystery and under-thought the style behind Hollow in the Land, but he put a perfect amount of thought into every other aspect of the film, resulting in a compulsively watchable whodunit worthy of Agron’s newfound talents as a performer. It’s the kind of project where it’s more interesting to wonder where everyone will go from here. Hopefully the next thing they work on will be even better, as this showcases a decent amount of promise for the future.

Hollow in the Land opens in select cities across Canada on Friday, January 26, 2018. It will also be available on digital platforms the same day.

Check out the trailer for Hollow in the Land: