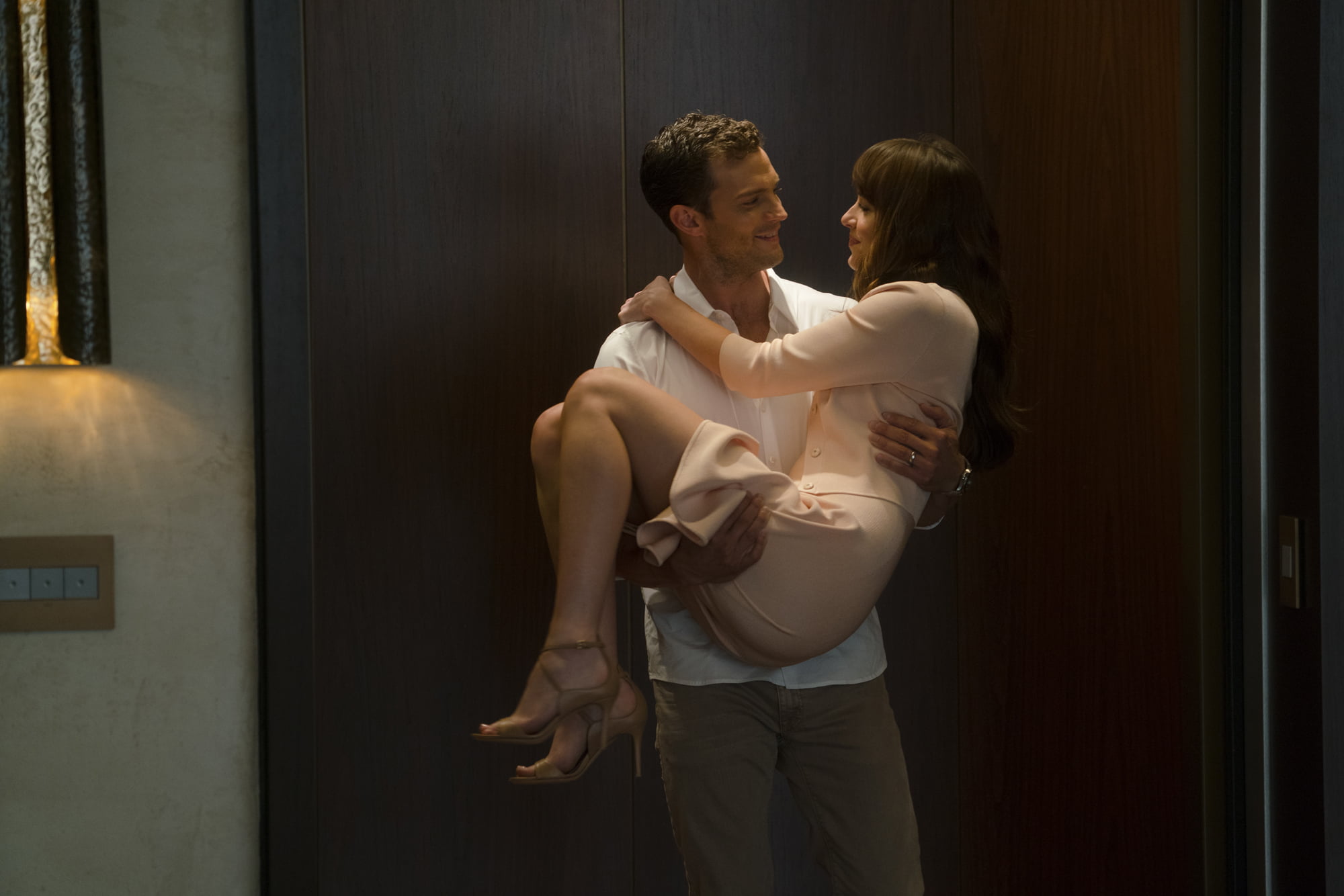 Fifty Shades Freed, the final cinematic adaptation of the bestselling series of erotic novels by E.L. James, barely qualifies as a movie, but it’s also the most palatable and knowingly silly entry in the franchise. Despite being a superfluous trashy movie, director James Foley (Fear, Glengarry Glen Ross) uses his second crack at the material to deliver something that still isn’t sexy, but is at least laid back and easygoing enough to function as B-grade entertainment. I would hesitate to say that it’s good, but it’s certainly the closest that the romance between whiny, controlling billionaire dreamboat Christian Grey and bland everywoman Anastasia Steele has come to being remotely engaging. It’s also surprisingly never boring, and rarely as morally icky as the previous films.

Fifty Shades Freed – what’s being freed is anyone’s guess – opens with the long awaited wedding of Christian (Jamie Dornan) and Anastasia (Dakota Johnson). Christian remains overly protective of his new wife, not wanting her bare, sunbathing breasts to appear on the cover of a tabloid, but also not wanting her deranged, jilted stalker of an ex-boss (Eric Johnson) to come around and murder them both. Naturally, Anastasia, an independent woman of the new millennium, feels rightfully stifled by the imposing of rules and the constant prying eyes of security details.

Sometimes Anastasia will break Christian’s rules deliberately and to his face, which leads to one of the most interesting aspects of Fifty Shades Freed. Instead of functioning as high sexual fantasy like Fifty Shades of Grey and Fifty Shades Darker, Fifty Shades Freed is a bit of relationship porn, which is still problematic, but a lot less outwardly laughable. The push and pull between Dornan and Johnson – two actors who previously had no chemistry with one another – feels a lot easier, and sometimes even looks like the pair is having a good time interacting with each other (which might be the two of them realizing that their time with this franchise is almost over). They bicker like a married couple might, and some of the best scenes in Fifty Shades Freed involve the two of them simply talking about how their day went, even if their day involved nearly getting killed by a psychopath or the shock of finding out that they’re going to have a baby. This is just how their lives are, and Foley lets Johnson and Dornan camp it up for a change by having them read lines about nearly being killed with all the emotion of talking about bringing their car in for an oil change or getting stuck in line behind a maddeningly indecisive customer at a coffee shop. Foley, Johnson, and Dornan know by now this is all stupid, and here they’re finally allowed to embrace it. What can Universal or the producers do at this point and this late in the game? Fire them? The “zero fucks given” approach is a welcome respite from this film’s obnoxiously self-serious predecessors.

Gray, who couldn’t quite find a decent tone with his previous outing in the franchise, seizes upon the more genteel tone of screenwriter Niall Leonard’s threadbare adaptation of his wife’s novel, and uses it as a chance to throw the convoluted and silly plot to the side and offer up the kind of peek into the lifestyles of the rich and famous that we can now only get in trendy magazines. Utilizing more montages of Christian and Anastasia on lavish vacations than Rocky films have training sequences, Foley gives the viewer what they want: unfiltered eye candy; pretty looking people doing pretty looking things. And it mostly works because it allows the previously skittish stars a chance to unwind and approach the material from a place of almost zen relaxation.

Of course, the sex scenes are still terrible, and for many fans of the novels, that’s always been the main attraction. There’s a particularly laughable bit involving a pint of Ben and Jerry’s and a dining room table that had the preview audience I watched it with writhing in rightful laughter, but for the most part the sanitized depiction of Christian’s BDSM leanings are useless. Dornan looks completely checked out to the point where I paid more attention to the continually changing amount of five o’clock shadow on his face. Johnson’s also on another planet in these scenes, but the look on her face in the sex scenes look like she’s actively thinking about being anywhere else than Christian’s Red Room of Pleasure. She could the thinking of garlic bread or the Packers’ chances next year for all I know. At any rate, she looks engaged, but not by the sex.

So with the lack of sexual tension further pouring water on an already decidedly un-erotic potboiler franchise, Foley turns to one of his strengths: a depiction of fragile masculinity that has been a common theme throughout many of his films. In the world of Fifty Shades Freed, the women are the most interesting and charismatic people in the room, and the men are ineffective, childish, and really just there as eye candy. It’s astounding that it took two entire films for the people behind the franchise to realize that such a depiction of men as playthings is the only way to sell such a dire, problematic fantasy, but here we are, and at least Foley sends things out on a high note.

Fifty Shades Freed is refreshingly the only film in the series to actively tackle head on that Christian Grey is a maladjusted man child who, in the words of Johnson’s heroine, needs “to grown the fuck up.” He’s always been depicted as a controlling, powerful man of mystery; the kind the filmmakers want the viewer to look at and say, “You know, I think I could save him.” Similarly, while Christian is finally exposed to be a charming, flawed fraud, Johnson’s villain is made to look like an even more incompetent idiot, which feels like the right decision.

It’s just a shame that the threat of Johnson’s looming baddie is kept on ice until the last possible second (probably because everyone involved knows this plot is ridiculously stupid and irrelevant) because the final third of Fifty Shades Freed is an expositional dump of things characters in the film should have talked about and realized in earlier films that are raced over because no one involved cares, and this is the last film so no one will ever care again after this. It’s absolutely terrible filmmaking and writing, but kudos to everyone involved for ending the franchise with a final act so broken and protracted that it ended up nicely summing up what I felt about the franchise from the start: that ultimately none of this will ever matter.

Check out the trailer for Fifty Shades Freed: