There’s a bit from the animated sitcom Bob’s Burgers that I like to trot out every now and then when trying to talk about films that gleefully employ every textbook cliché they can get their hands on. When Bob Belcher’s best customer, the dull witted but kindly Teddy, sees the burger shop owner on the telephone and stuck on hold, he inquires what music is being played. When Bob tells him that the song has just switched from Tom Petty’s “American Girl” to The B-52s “Rock Lobster,” Teddy can’t contain his jealousy, exclaiming excitedly to no one in particular, “They’re playin’ all the hits!”

About halfway through Canadian writer-director Michael Melski’s low budget, but competently packaged horror thriller The Child Remains, I exclaimed just that. There isn’t a single element of Melski’s film that hasn’t been trucked in from better and more established horror classics, and while the film doesn’t necessarily have a tongue-in-cheek tone, it definitely presents itself as low stakes fluff that isn’t reinventing the wheel.

It was once told to me that jump scares, spooky noises, and sudden twists would work 100% of the time if they’re employed correctly and with a degree of artfulness or originality. Nothing about The Child Remains worked for me or spooked me, but films like this have a time and place. It’s the kind of thing parents would put on at a sleepover for tweens jonesing to see a scary movie. There’s not much blood, the premise is creepy without being terrifying, and it probably won’t keep them up too late because it’s so breezily forgettable.

Rae (Suzanne Clement), a pregnant journalist suffering from PTSD, and her beau, Liam (Allan Hawco), a struggling musician, have travelled to a recently opened rural bed and breakfast with the hopes of a trigger free weekend. Almost immediately, something seems off about the well decorated period property and the far too knowledgeable proprietor (Shelley Thompson), but Rae and Liam decide to stay anyway. It’s not long before the naturally inquisitive Rae stumbles upon the property’s past as a maternity home for unwed mothers, and spooky secrets that have been kept buried for decades. 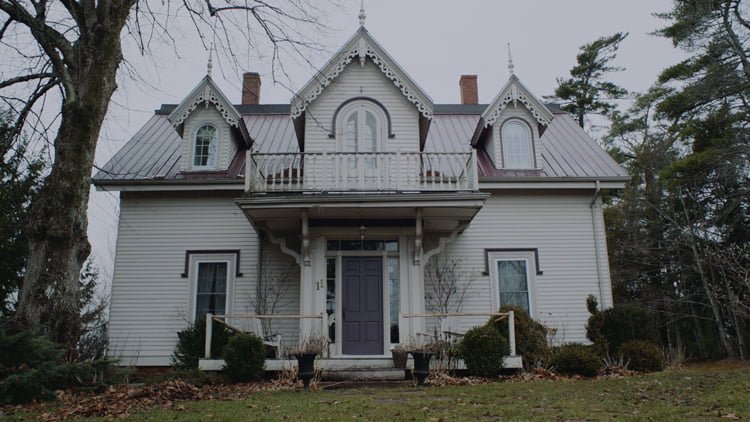 Basing his material very loosely on the “Butterbox babies” scandal that rocked a small town Nova Scotia community, Melski clearly knows what he finds scary, heavily leaning upon The Shining and The Changeling for thematic material, but never coming close to approximating either film’s style. From the jump, the viewer is treated to guttural noises, the sounds of crying babies, rustling leaves, creaky floors, creepy marionettes propped suspiciously against doors, various other creepy dolls, skeletons, complaints of unusual smells, a duplicitous librarian, an obviously ominous section of the woods behind the inn that’s cordoned off by barbed wire, a cop who’s seen some shit, a shell-shocked caretaker, whistling winds, POV shots from the perspective of unseen presences, family secrets, the slow descent of a main character into madness (complete with Jack Torrance styled notes left lying about), mysterious voices on tape recorders, thunderclaps, and a big twist reveal. THEY’RE. PLAYING. ALL. THE. HITS.

About the only nifty and novel thematic plot thread in The Child Remains is the idea that a piece of property and the land around it could suffer from PTSD (although one could argue that The Shining also attempted something similar, but not as overtly). That’s a spiritually intriguing notion that hasn’t been attempted very often, but everything else in here about religious morality, spousal jealousy, and the survival instincts of an expectant mother has been covered before, better, and too frequently in the horror genre to list. Melski dutifully paces it all, and the film never ends up being boring in spite of its open aping of other movies, but it’s never anything more than passably watchable.

Most of the film’s overall good will comes from its inarguably overqualified cast. Clement gives everything she has to a role that could have been played by almost anyone else, making for a likable heroine. Hawco, playing somewhat against type, gets to showcase both light and dark sides of his personality to nice effect. Despite her stock “spooky owner” character, Thompson really makes the most of her screen time, straddling the line between knowing camp and genuinely scary with great dexterity. They’re all working below their already established talent levels, but that doesn’t mean that they aren’t putting in some good work. It’s up to them to sell a bunch of things savvy viewers have already seen, and their sales pitches are spot on.

The Child Remains looks and moves like a film one would find while flipping through the channels at two in the afternoon on a weekend sometime around Halloween. It’s not a good film or an original concept by any stretch, but it’s not charmless. It will annoy people who loathe clichés and want to avoid them at all costs, but if all you want are some spooky noises and low budget rural atmosphere, one can do much worse than this. I’ve seen much worse greatest hits compilations than this. It might be low praise, but praise nonetheless.

The Child Remains opens on May 18th in Toronto, Vancouver, and St. John’s. It’s currently playing in Winnipeg, Halifax, Bridgewater, Truro, and Sydney.

Check out the trailer for The Child Remains: