Review: Let the Sunshine In

Although it feels in many ways like a marked departure for French auteur Claire Denis, the relaxed and relatively gentle comedy Let the Sunshine In still slots nicely into her hypnotic oeuvre. Inspired in part by the works and dialogues of Roland Barthes (adapted in part with the help of novelist and screenwriter Christine Angot), Denis’ look at one middle aged woman’s fraught, lengthy search for love and contentment reaffirms the director’s status as one of the most mature, patient, and giving filmmakers. In some ways, Let the Sunshine In is in a decidedly lower key than some of Denis’ better known successes, but it’s a success nonetheless.

Juliette Binoche stars as Isabelle, an artist struggling to move past her divorce. Feeling the need to find true love, Isabelle carries on with a handful of different men. Vincent (Xavier Beauvois) is an entitled, controlling, condescending, and married banker who refuses to leave his wife for Isabelle. There’s an actor (Nicolas Duvauchelle) who’s also married, haughty, naturally dramatic, and indecisive, but more attuned to feelings of guilt and remorse. A fellow artist (Bruno Podalydès) seems like a safe bet, but bland and dispassionate in comparison to the other men in her life, and a chance encounter with a stranger on a dance floor (Paul Blain) offers a moment of hope. Throughout all of her often misguided dates, her ex-husband (Laurent Grévill) looms large, as he still finds ways to insinuate himself into her life emotionally, sexually, and through shared custody of their daughter.

Let the Sunshine In might be one of Denis’ most curiously clichéd efforts to date – which is part of the point – but it’s no less rigorous in its approach. Denis and her frequent cinematographer Agnès Godard lightly dance around Isabelle and her conversational partners, frequently zooming in on faces that often express great amounts of pain and displeasure, but also flashes of jubilance and warmth that carry weighty power and meaning. A lot of Let the Sunshine In is built around characters conversing, arguing, or talking down to Isabelle at great length, but Denis still understands and values the subtlety and grace of a barely noticeable eye roll or a casual smirk from the corner of one’s mouth. Possibly more than any of her other films to date, Let the Sunshine In is more about what the viewer hears than what the viewer sees, but those visual punctuation marks and purposeful dialogue breaks are where the true emotions of Denis’ work will be felt. 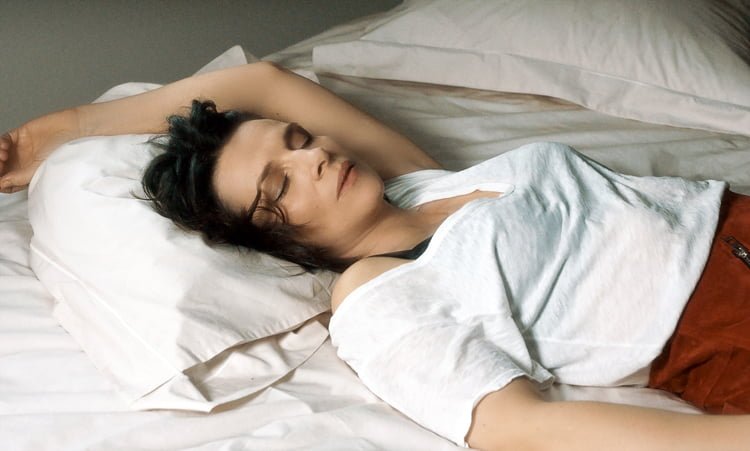 Binoche understands this brilliantly, unafraid to play Isabelle with complete emotional transparency right from the opening moments of Isabelle engaging in less than pleasurable intercourse with Vincent. Let the Sunshine In is a portrait of a woman who’s longing for love, but more importantly a depiction of a person slowly learning to love themself for the first time in what must feel like forever. Denis needs an actress commanding enough to blow all of the ineffective male characters off the screen, but she also needs to display a considerable amount of vulnerability. The sneer that crosses Isabelle’s face when a DJ starts playing Etta James’ “At Last” is a minor touch that’s barely noticeable, but Binoche makes it one of the funniest moments in any film this year. Similarly, Binoche is able to let her character’s guard down for the film’s most cathartic sequence, a lengthy debrief with a kindly, attentive psychic (Gérard Depardieu).

Denis latest socially conscious story built from two major parts: the dialogues and Binoche, but that doesn’t mean there’s a lack of depth to Let the Sunshine In. Denis is a skilled enough filmmaker to know that intelligent audiences will be able to figure out what she’s driving towards, even if the final destination leaves things with a completely open end. The viewer knows what Isabelle only partially understands: that all the men in her life at this point are needy, controlling, manipulative, and probably lying to get what they want. They’re side effects of a world where masculinity means constantly complaining about how difficult things are at work, how women can’t understand them, and why their lives are in shambles. Isabelle wants love, not to fix a load of broken men, but at the moment she doesn’t know what true love and genuine human connection entails. She’s equal parts skeptical and longing; not lovelorn to the point of being blinded, but someone who’s diminished expectations of love has led to lapses in better judgment. Her words are constantly turned around on her, making her unable to raise the simplest, most valid concerns about her relationships. By the hopeful end of Let the Sunshine In, Denis’ eminently relatable protagonist is closer to realizing her happiness, but how she’ll achieve that will remain uncertain.

And that’s one of the best qualities to Denis’ work here. Let the Sunshine In is about carrying on with life instead of letting others hold you back. It’s a fairly clichéd sentiment to commit to film and one that has been attempted by a plethora of lesser filmmakers, but there’s a fair case to be made that love is the greatest cliché of the human condition: equal parts lovely, painful, confounding, and worth failing at repeatedly until it’s found. That naturally lends itself to a lighter tone than many of Denis’ previous films, but it’s still subject matter that’s worthy of the filmmaker’s attentiveness, crackling dialogue, and unparalleled attention to detail.

Let the Sunshine in opens at in Toronto (TIFF Bell Lightbox) and Vancouver (Cineplex International Village) on Friday, June 1, 2018. It expands to Montreal on June 15 and throughout the summer to other Canadian cites.

Check out the trailer for Let the Sunshine In: