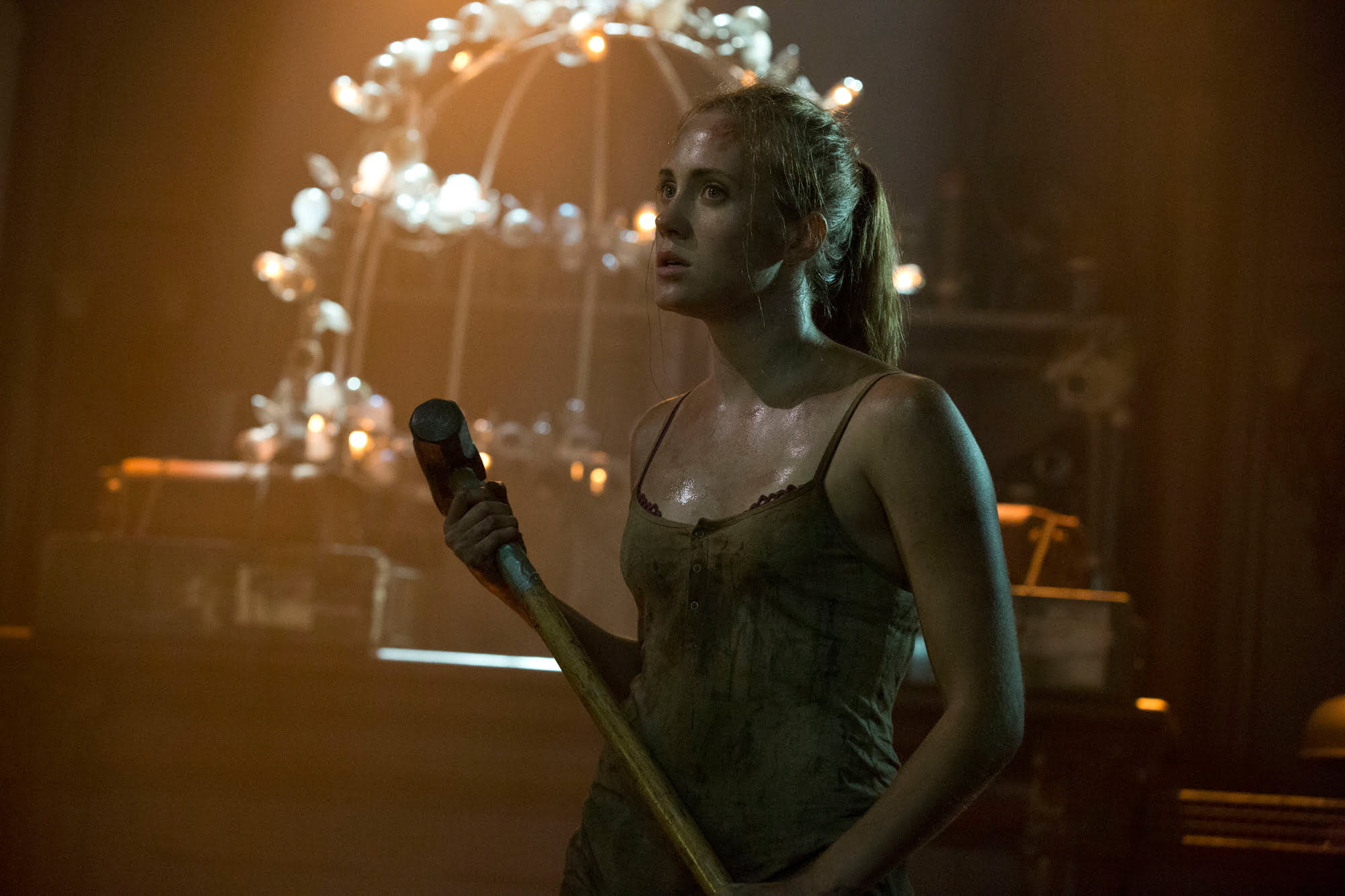 Contrary to what most people might think about film critics, I get no joy whatsoever out of panning a film like Darken. Unlike taking a hundred million dollar Hollywood production to task for bleeding the audiences’ wallets and purses dry for the sake of making a quick, cynical buck, calling out a vastly smaller independent film for being just as bad is sometimes akin to picking on a child at a local playground for not making it across the monkey bars fast enough. But, if you’re like me and believe that every film big and small deserves an equal chance, you tend to agree to review films before you actually see them. Sometimes it’s a decision that a critic can immediately regret.

If you agree to review an independent, ultra-low-budget film before you see it (which is 99% of the time), and you watch it, and then it turns out to be terrible, you can’t keep your mouth shut about it even if you wanted to. You could scuttle the story, preferring to adhere to the old “if you can’t say something nice, don’t say it at all” adage, but eventually the film’s representatives will get angry or upset that you didn’t run a review at all. Films like Darken test my brain and make me wonder if I would rather deal with befuddled producers and publicists by not talking about it, or pan a film where I feel a lot of the problems were things that were out of the filmmaking team’s control.

Some readers think that writing resoundingly negative reviews can be fun and cathartic for a critic. Sometimes they are, especially if the film offends your moral or personal sensibilities or if it clearly holds the viewer in idiotic contempt. There’s nothing fun about writing a negative review for a film like Darken.

A muddled, confusing, and cut-rate to the point of embarrassing fantasy thriller, Darken is the kind of low budget Canadian effort that was clearly conceived with a high degree of ambition that couldn’t have been matched by the production’s lack of time and resources. It’s a film so uniquely awful and unbearable to sit through that it had to have started its life as a labour of love for some of the people involved or else it never would have been made in the first place. It’s unwatchable, and I dare say that it’s in no condition to be receiving a theatrical release, but I still have an admiration that it got made in the first place. This isn’t an endorsement by any stretch, but there are flashes of a much more interesting film dying to break through. That film might not have been much better, but now we’ll likely never know.

One day while taking a mental health day away from her nursing job, Eve (Bea Santos), stumbles across a woman in distress. The victim of a stabbing, the woman insists that Eve enter the spooky looking building behind them and help rescue someone else who might be in as great of danger. Eve enters the doorway and is transporter to the world of Darken, a refuge for lost souls of various times, backgrounds, and eras, run by the mysterious and ethereal Mother Darken. Mother Darken has gone missing, and her kingdom finds itself in disarray during her absence. Eve agrees to help a band of Darken’s residents to find their ruler, while dodging those who seek to usurp the throne.

I can’t really begin to describe the world created here by screenwriter RJ Lackie. It’s so babblingly incoherent and inscrutable that even taking constant notes proved fruitless. The names of the characters and the subsections of Darken all have similarly vague sounding names. You know a film is in trouble when it’s almost impossible to tell if the characters are talking about a person, place, or thing that’s integral to the storyline. Even with a flow chart, this would be impossibly confusing. That’s probably why earlier this year, Darken was given a multi-part online prequel series that’s both necessary to understanding any of this, equally drab and monotonous, and not even worth the time it takes to watch it all. You could make a drinking game that would turn lethal after fifteen minutes from the number of times people say the word “Darken,” but being drunk won’t make it easier to get on Lackie’s wavelength. 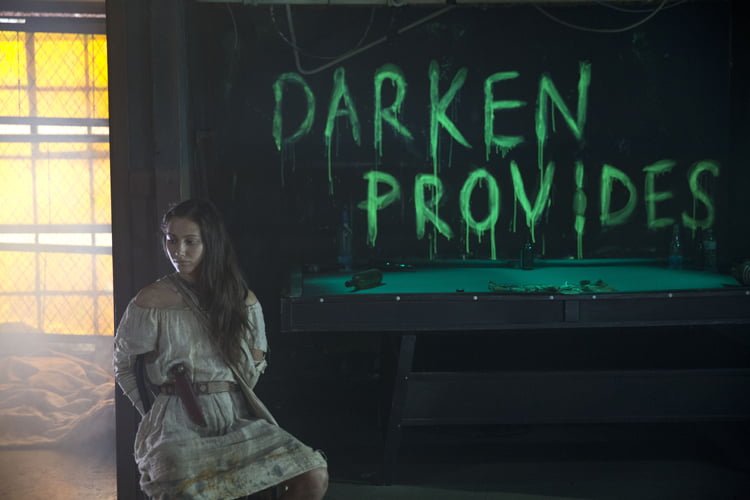 One would think that a fantastical world such as the one being described in Darken would feature different rooms for the different personalities and functions of this sanctuary (which for some reason needs to have a second refuge at its heart), but this is a film that doesn’t have a dime to its name. Every room, hallway, nook, and cranny is clearly just portions of the same dingy warehouse dressed with only slight differences and filmed from different angles. If all of the rooms in a fantasy world look the same, and the set-up for the film necessitates that every room has a different tone, a lack of budgetary execution kills any suspension of disbelief.

This overwhelming cheapness extends to every aspect of the film. The performances are mostly awful, save for Oluniké Adeliyi (wonderful as Eve’s guide and closest protector in the fantasy realm), suggesting that the production got who was available and affordable instead of who was best. The costumes and props look hideous, giving these characters the appearance and aura of a bunch of LARPers with different interests coming together at the last second for a genre crossing melee. Thrones look like simple wicker chairs with things glued to them. Neon lights that are visible in the background are just fluorescent bulbs sitting there. It’s a film where one will struggle to figure out where the money for the production actually went, but also have a sad understanding that probably everything they were given has made its way to the screen.

Not only did Lackie’s screenplay need several more drafts to become usable (or at the very least more than 80 minutes to tell a story), but it’s also the kind of material that can’t be half-assed. It’s all or nothing, and middle ground (or lower middle ground in the case of Darken) is embarrassing to everyone involved. I can’t imagine that a film like Darken is easy to make, but it shouldn’t be made on the cheap and for the sake of getting it made. Everything about Darken feels compromised and hobbled, but the kernel of an interesting idea is there. If something like the recently released and similarly themed Hotel Artemis can (sort of) work, there’s no reason something like Darken couldn’t have succeeded with just a bit more care, craft, and money.

I also can’t lie much of the blame at the feet of director Audrey Cummings or her cast. No one was going to make Darken work under these conditions. Everyone does what they can with the role they’re given, and no one phones it in. Cummings, who previously helmed the unexpectedly great horror thriller Berkshire County, is a filmmaker with strong natural instincts and a keen sense of pacing. She’s doing everything she can to keep things moving at a brisk clip and to hide some of the production’s woefully obvious limitations. Again, no one was going to make this work, but I hope her next film has a lot more going for it.

I hope that for everyone involved with Darken, really. Everyone here except those controlling the purse strings deserves better than this. In its current form, Darken is extremely squirm inducing; not from discomfort or tension but from mortification. It’s unreleasable, and much like I wanted to bury the review for this thing, I think the producers and distributor should have responded in kind. If you truly want to see Darken, I’m sure it will have a long life on television, acting a cable network’s primary programming choice for the not-so-coveted 4am to 8am slot on Saturday and Sunday mornings as part of a begrudging Can-Con requirement. It didn’t have to be like this, but that’s how it is.

Check out the trailer for Darken: