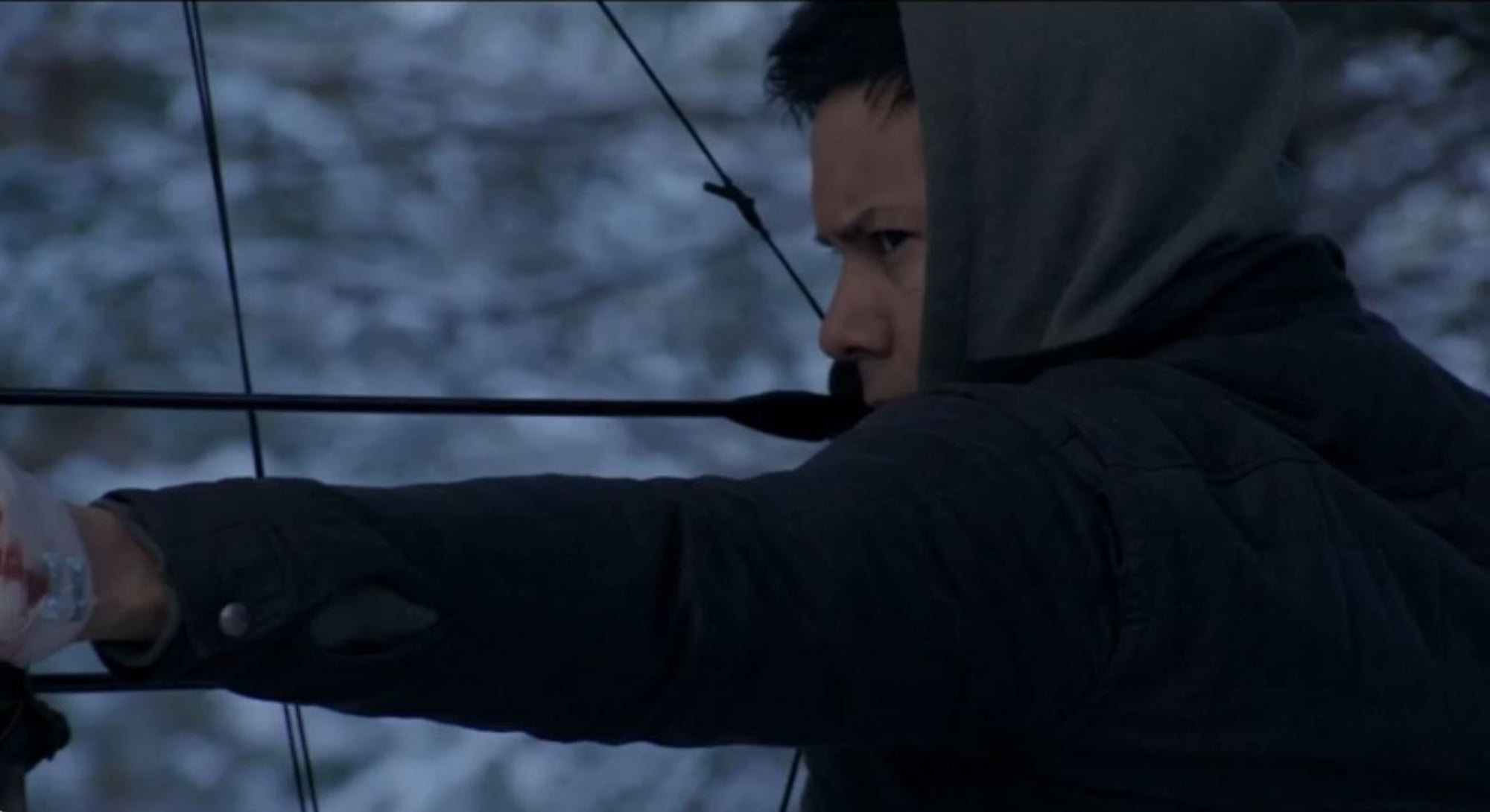 While it’s decidedly rough around the edges, the unique Canadian thriller North Mountain certainly earns points for originality and the desire to tell what could have been a standard B-movie potboiler from a fresh perspective. A cat and mouse suspense thriller told with indigenous, two-spirited protagonists, the debut feature of Nova Scotian writer-director Bretten Hannam is the work of a filmmaker who still has a way to go to find his visual and narrative voice, but someone who keenly understand the need for similar stories to flourish and grow in a decidedly white and straight marketplace.

Wolf (Justin Rain) is a Mi’kmaq subsistence bow-and-arrow hunter living in the secluded, titular community with his grandmother (Katherine Sorbey). One day while approaching one of his kills, he stumbles upon Crane (Glen Gould), an unconscious, wounded, middle aged man with a suitcase full of American cash next to him. After an initial scuffle, Wolf takes Crane back to his grandmother’s cabin to fix him up; stashing the cash, but not asking too many other questions. Although there’s still some uneasiness, Wolf and Crane start becoming friends, with the young man unaware that the fleeing criminal has previous connections to the family. When a gang of crooked New York City cops (led by a gleefully over the top Gary Levert) come after Crane and their missing money, Wolf’s loyalty to his friend – and romantic crush – is put to the test.

For better and for worse, North Mountain wastes no time getting started. It’s only three minutes into the film that Wolf finds Crane, and Hannam’s pacing doesn’t let up from there, content and confident in his material’s ability to fill in the gaps later on. The rapid escalation of Wolf and Crane from friends to lovers and their increasingly volatile fight to stay one step ahead of the villains makes for an unpredictable and usually fascinating film. By twenty minutes into his seventy-five minute film, Hannam has already raised the stakes exponentially, leading to a story where it feels like anything could happen at any time. From a plot standpoint, North Mountain is consistently engaging, even when the characters haven’t been developed enough to warrant a full investment in their plight. Such a lightning fast pace is a double edged sword for Hannam. There’s no filler to be found in North Mountain’s taut construction, but not much depth, either. With an additional fifteen minutes of story to better flesh things out, this would be a much better suspense thriller. 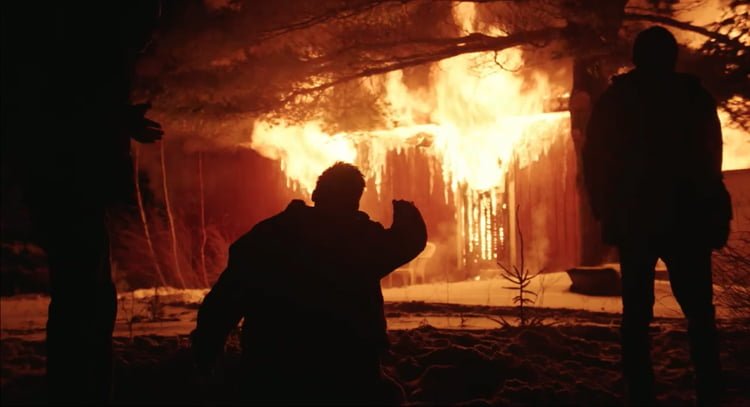 The real depth comes from the eventual coaxing out of Wolf and Crane’s attraction to each other. At first, this mutual attraction comes with minimal foreshadowing, but Hannam handles it with tact and grace, working it into the storyline’s machinery rather nicely. To watch a gritty, B-movie like North Mountain with queer indigenous characters for leads isn’t a gimmick. Hannam makes it feel realistic and poignant, not novel or tacked on. While the idea of lovers trying to outrun a bunch of bad guys isn’t a new concept, I can count on one hand the number of such potboilers that take place among queer characters, and I can count on two fingers how many of them involve male leads. If I were to count the number that also have a First Nations perspective, my hand would just be a fist. It might seem like an equitable novelty to a cynic, but the sexuality swap at the heart of North Mountain is invigorating and energizing.

While Hannam’s film has its heart in the right place at all times, the filmmaker’s lack of true technical skills and the film’s limited budget hinder the final results. There are plenty of continuity errors. There’s some embarrassingly obvious ADR lines. The editing in action sequences is too dodgy to adequately hide Hannam’s lack of a visual and make-up effects budget. The fight choreography during the film’s several scuffles ranges from adequate to “why did they use that take?”. Almost half the film’s longer shots have unnecessary camera zooms. The velocity of the film means that credibility starts to become strained down the stretch, especially when the protagonists start taking on more injuries than normal human beings can withstand. In short, North Mountain remains an amateurish work that’s not unlike many student films. It’s an example of a filmmaker who’s still experimenting and figuring things out, and while some of it works, much of what’s being attempted on a technical level is distracting from an admittedly great idea. At least North Mountain isn’t trying to be flashy or overly stylized. If that were the case, this might have been a total swing and a miss for Hannam.

But whenever Hannam’s work starts to waver, his cast is there to perk things up, especially Rain’s captivating lead performance. Balancing his character’s skepticism, sexual awakening, and desire to help someone in need, Rain walks delicately between Wolf’s ever evolving moods and perspectives, saying just as much with a facial expression as he can with a line of dialogue. Equally of note is Meredith MacNeill, appearing as Wolf’s general store owning Aunt, a woman who cares deeply for her nephew’s well being. MacNeill’s character is the lynchpin of the plot, delivering a lot of necessary background information, but the actress also imbues what could have been a thankless role with a lot of warmth and compassion. The film has a cast that believes in the power of the material, which means a lot considering some of North Mountain’s other various shortcomings.

North Mountain isn’t a good movie, but that doesn’t mean that I don’t like or admire it. It’s a poorly made film with lots to like within its shaky margins. Hannam has a long way to go as a filmmaker, but his storytelling instincts are onto something remarkable. Once his skill set aligns with his creativity and eye for inclusiveness, I’m sure he’ll end up going to better and more prestigious places.

Check out the trailer for North Mountain: