Someone over at Sony sure loves Internet culture. After a pair of animated offerings revolving around popular mobile fads – The Emoji Movie and The Angry Birds Movie – someone over there thought it would be a good idea to branch into more “adult” territory with a live action thriller based on one of the internet’s most notorious memes. The horror movie (and I use that definition very, very lightly) Slender Man, based on the Creepypasta creation of Erik Knudsen (a.k.a. Victor Surge), somehow manages to be even more soullessly awful than Sony’s more lighthearted attempts at cashing on past-their-prime kiddie fodder than their animated movies. A film made for basically no one, Slender Man emerges from the multiplex mire as not only a lock to be one of the worst films of the year, but one of the most excruciatingly dull horror movies to receive a wide theatrical release without going straight to VOD.

In a fictional New England town, four besties in their early teens – fuelled by vodka and porn (no, seriously) – decide to break up the monotony of their hangout by summoning the dark net based entity, Slender Man, a Pied Piper-ish sort of character who has no face, always wears a suit, and has extendable tree trunk arms or some shit like that. Anyway, these kids find themselves stalked by this presence that half-assedly haunts their dreams with visions that look dated even by the standards of the late-90s Marilyn Manson videos they came from. If they come in direct contact with the Mr. Slendo, the girls will either be taken (hopefully to a better fucking movie) or they’ll go mad.

Instead of them ever trying to tangibly figure out how to stop Señor Man outside of a scene where they all take treasured personal objects into the woods to “destroy something they love,” most of the film’s running time is spent watching idiotic, thinly drawn characters wait for the inevitable moment that the ghoul will catch up to them. If you think that anything exciting will even happen when those moments arrive, you’ve already given veteran music video and television director Sylvain White (Stomp the Yard, The Losers) and screenwriter David Birke (penner of a bunch of DTV junk and Elle, which, since I’m in an ornery mood, will still insist is an awful film) far too much credit.

Credit where due, Slender Man doesn’t waste any time when getting down to sucking. The creaky floorboards, obnoxiously loud crickets, musical stings, and obvious jump scares start coming fast and furiously within the first five minutes. Slender Man has no desire to build to anything genuinely scary, but just egregiously assumes that anything it does will be enough to make teenagers shit their pants with fear. Considering how frightening it is to be a teenager these days, I severely doubt anything White and Birke cynically offer up will have anyone running for the exits, except for people trying to get refunds from the box office before their thirty minute grace period is expired. Instead of building suspense, White just throws things at the viewer, hoping the mere sound of them crashing into each other is enough. It’s not, and it’s hard to care about something that’s just trying to be scary for the sake of producing soulless product. I’ve been to haunted houses put on by grade schoolers that were scarier than this.

I also say “sounds” because White and cinematographer Luca Del Puppo seem to hate the film’s locations and the faces of their actors. This might be the darkest film I have ever seen, and not from the standpoint of the material. If it weren’t for the blinding brightness of the trailers and the pre-show, I would have thought I was going blind. There’s definitely nothing worth SEEING in Slender Man, mostly because 85% of the film is visually indecipherable. If you’re not looking at pitch black shots of people doing nothing important or particularly spooky, you’ll get lots of shots of trees that are somehow still incompetently filmed. Outside of one genuinely great camera trick where someone unknowingly films someone breaking into their house, Slender Man is one of the most unnecessarily ugly films ever crafted.

Not that the audience will notice. They’ll probably check out earlier than that, especially if they’re over the age of 16. Slender Man has been made seemingly with the same audience in mind as The Emoji Movie and The Angry Birds Movie, and the decision to make such a frightless, spineless, and bloodless chiller aimed at such a young audience is baffling. A passing knowledge of Knudsen’s creation (I refuse to call this person by their idiotic nom de guerre) is a prerequisite for Slender Man. Nothing will really be explained about the beastie – who’s a cross between the Pied Piper, Freddy Krueger, and the Weeping Angels from Doctor Who, all minus any actual backstory – and nothing will be enhanced by watching the film that’s been made about it. Slender Man has all the depth as the viral sensation that spawned it, which is to say that there isn’t much on a surface level. 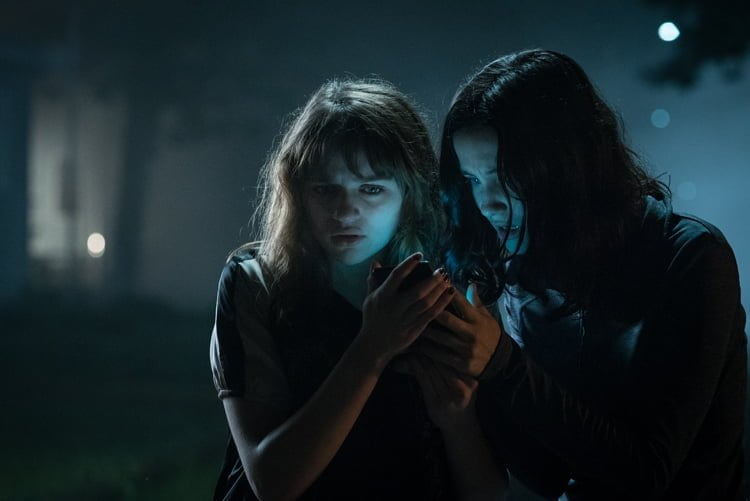 But by that same token, Slender Man is based on a meme that’s now almost a decade old. The teens that grew up on this are officially too old to care about something this lame, adults would have never cared, and younger kids have moved on to other spooky stories. Slender Man is a film that never needed to be made, and has seemingly only been produced because it has an infamous, tasteless brand attachment. Maybe if this had been made five or six years ago, it could have drawn audiences in droves. Today, it all seems like someone’s uncool uncle trying way too hard to spook kids with the same tired gags for ninety minutes until he gives up in frustration and a pool of flop sweat. It’s the cinematic equivalent of that one teacher in Bo Burnham’s Eighth Grade that’s dabbing in front of his students to seem hip and relevant.

As bad as the direction is from White, much of the fault here has to lie at the feet of Birke’s witless material. Stripping away anything that could be fun or relatable to teens, Birke replaces it all with ludicrously overbaked and tone deaf dialogue and a steadfast refusal to make the characters anything more than interchangeable cannon fodder. There’s also a ludicrously misplaced subtextual thread about fears surrounding teen sexuality and pregnancy that has nothing to do with anything, isn’t utilized properly, and manages to be interesting only because it’s so awful that it becomes hilarious the more one thinks about it. Many teen horror films try to incorporate puberty and emerging sexuality into their narratives, but none as stupidly as Slender Man. How anyone could look at this script and find it remotely usable is beyond comprehension.

The actors are fine, particularly Julia Goldani Telles and Joey King as the ostensible leads, playing the smart one with a good family and the goth-y true believer, respectively. It can’t be easy acting like you’re frightened when nothing remotely scary is happening for an entire film shoot, so they deserve considerable points for giving their all here. They can scream well, and they try to make something out of their almost non-existent characters. Furthermore, you can barely see their faces because no one ever bothered to buy a lighting rig for the film, so they might skate on by without people even remembering or noticing that they were in the film in the first place.

Slender Man is horrifying, alright. It’s horrifically boring and cynical trash that gives refuse a bad name. This says nothing about how the Internet meme that spawned this piece of crap was responsible for some very real copycat murders off screen and offline. It’s nothing that Slender Man directly addresses (outside of showing how the character can make people go mad), but I almost wish they had. Outrage at something being tasteless is a pretty strong emotion that could provoke a reaction in people. It would have done something even if the rest of the film was sanitized to fleece a pre-teen crowd. It still would have been awful, but it would have almost justified its existence. All Slender Man will provoke is buyer’s remorse and the strong desire to take a nap. The Emoji Movie was far scarier than this.

Check out the trailer for Slender Man: