Review: Divide and Conquer: The Story of Roger Ailes

A detailed, but dry and sanitized look at one of the most controversial and disgraced figures in media and political history, Alexis Bloom’s documentary Divide and Conquer: The Story of Roger Ailes will make viewers better understand the personality and actions of its titular subject, but never really delves deeply into what this man’s life means in a greater context. Perhaps because there’s so much to discuss when talking about the man who mobilized the Fox News army or possibly a side effect of Ailes’ notoriously litigious nature, Divide and Conquer isn’t so much a film that speaks “truth to power” and more like one that speaks “truth about power.” It’s not nearly as satisfying or eye opening as it could’ve been, but as a straightforward biographical timeline, Divide and Conquer: The Story of Roger Ailes is a well researched, edited, and compiled bit of scholarship.

Ever since he was a teenager growing up in Warren, Ohio, Roger Ailes was known as a persuasive, staunchly conservative man. He got his professional start in Philadelphia, working as production assistant for The Mike Douglas Show, which he would parlay into a job working for then presidential candidate Richard Nixon, becoming the first ever “media advisor” for a political campaign. Capable of helping GOP candidates utilize the power of television to its fullest potential, Ailes was a showman at heart who keenly understood the power of populist propaganda and how to use fear as a means of driving people to the polls.

While he was politically active, television remained his primary passion. After his talk show driven cable network and pet project, America’s Talking, was canned in favour of the creation of MSNBC, Ailes teamed up with Rupert Murdoch to create Fox News in 1996. Driven not by journalism, but by a fierce sense of loyalty, a desire to provoke fear, and the creation of salacious headlines designed only to drive ratings, Ailes’ most notable creation only fed its creator’s ego. It would all come tumbling down, however, on what should’ve been the most important day in Ailes’ career. On the same day Donald Trump was due to get the Republican presidential nomination, sexual harassment and assault allegations that had been brewing for decades behind the scenes at Fox News would lead to Ailes’ ouster as CEO.

As frustrating, arrogant, and unapologetically malevolent as Ailes could be, he’s nothing if not a fascinating subject to build a documentary around. Divide and Conquer: The Story of Roger Ailes has plenty of ground to cover, and a wealth of former co-workers, producers, pundits, biographers, lawyers, and even damage control consultants willing to speak out about their time spent around the media megalomaniac. Bloom (Bright Lights: Starring Carrie Fisher and Debbie Reynolds) has no shortage of biographical material to work from, and any specific portion of Ailes’ life could easily spin off into its own feature length film and offer vital truths about the evolution of the American political climate. Even his failed attempts to micromanage the dealings of his small, left leaning hometown’s municipal government and press is a fascinating example of how Ailes couldn’t function if he wasn’t in complete and totalitarian control of everything around him.

Early on in Divide and Conquer: The Story of Roger Ailes, one of Bloom’s interview subjects compares the news baron to Charles Foster Kane, and such an insight is obvious, but wholly appropriate. Through a combination of interviews, archival footage, and Ailes’ own written words from any number of the books he penned, a picture emerges of a driven person who hungered for power because he thought it would make him more likable and desirable. Ailes craved the limelight, but if he couldn’t bask in it, he would do whatever he could to control it. He would light a match, start an inferno, bark to millions of people that the match was created by liberals, and then proceed to douse everything in rhetorical gasoline. Fox News and America’s Talking had their fair share of notable personalities over the years (including Bill O’Reilly and Sean Hannity, who more or less went down with Ailes, and Glenn Beck, who’s still largely conservative, but regrets his role on the network today), but most of their talking points were coming straight from the mind of the network’s CEO. Outside of his equally demanding and loyal wife, Beth (who’s rarely glimpsed here, talked about often, and was reportedly cheated on more times than anyone can count), Ailes was a man with no real friends, plenty of enemies, and surrounded by people who wanted a slight rub of some of his power. 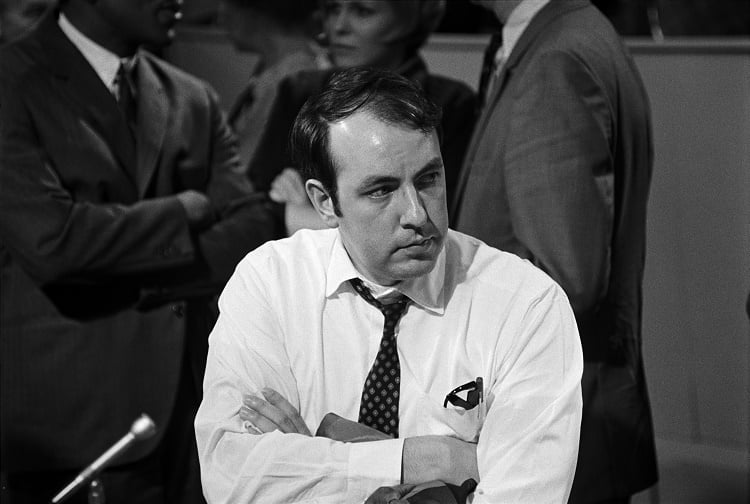 Ailes, for worse and not for better, changed the way that people consume news and political messages. Through his lucrative consulting firm, Ailes Communications, he helped the recently deceased George Bush Sr. manage a come from behind victory against Michael Dukakis by mounting the first ever negative television ad campaign designed to denounce a candidate. He proved that people would believe any news reports they were presented with as long as the graphics were flashy and the broadcasters were passionately shouting about every detail as if the end of days were already upon us. He knew that sex, particularly attractive women whose full bodies could be seen and not just their faces, would sell. People decry Fox News’ style over substance approach all the time, and rightfully so, but a quick turn of the dial to CNN or MSNBC would show viewers a similar product if one were to turn the sound off. There are many reasons why Fox News became the top rated cable news source for years, and it doesn’t solely have to do with its ability to function as a propaganda tool. No one in the industry wants to admit it, but all cable news outlets (and many broadcast ones) want to be Fox News, and that’s precisely what Ailes wanted from the start. He wanted to be the trendsetter; the man everyone looked up to as the all powerful figure behind the garish curtain.

To her credit, Bloom coaxes all of this out of Divide and Conquer: The Story of Roger Ailes with nuance and dexterity, even if the film does threaten to run a bit long and get bogged down under the sheer weight of all the details. Where the film stumbles, however, are the sections where Bloom attempts to parse the Weinstein level allegations brought against Ailes and some of his most prominent male co-workers. Outside of repeatedly restating the obviously justifiable viewpoint that no one should ever endure an abusive or uncomfortable work environment and giving victims and accusers a chance to share their experiences, Divide and Conquer: The Story of Roger Ailes adds little to the current discussion surrounding male media titans who use their influence and bully women into unwanted sexually minded situations.

That’s probably not entirely Bloom’s fault, but it feels like the filmmaker is erring on the side of caution here. Despite being forcibly removed from his post, Ailes still has powerful allies and lawyers on his side. During his tenure at the network, he was able to help make provable and virtually airtight 2006 allegations brought against Bill O’Reilly disappear through a combination of victim shaming, out of court settling, and reams of nondisclosure agreements. There’s always a sense throughout Divide and Conquer: The Story of Roger Ailes that the worst is yet to come to light, but Bloom is never able to fully say what that might entail. Even when it comes to discussing how Ailes’ preferred form of propaganda delivery eerily mirrors tactics employed by the Nazis, the facts are presented without any follow-through on what they all could mean.

Divide and Conquer: The Story of Roger Ailes is a righteously and rightfully angry film, but as a tool for enlightenment and change it falls short. Admirably and unlike her subject, Bloom relies on provable facts and emotional reactions that can’t be proven or disproven in a court of law. Bloom and her interview subjects never yell and scream about their time spent in or around Ailes’ circle of influence, which means that none of them are stooping to his level. At the same time, Divide and Conquer: The Story of Roger Ailes is a film that plays fairly with someone known for fighting dirty. As a biography, Bloom’s work is cohesive and comprehensive. As a takedown and call to action, it’s an overlong, glancing blow at best.

Divide and Conquer: The Story of Roger Ailes opens at The Hot Docs Ted Rogers Cinema in Toronto on Friday, December 7, 2018. It’s available on iTunes the same day.

Check out the trailer for Divide and Conquer: The Story of Roger Ailes: