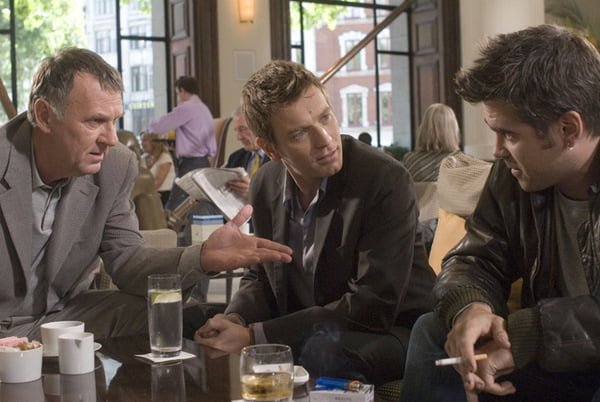 Colin Farell and Ewan McGregor play Terry and Ian respectively, two brothers from East London of humble backgrounds trying to break out of their working class blue collar grind (it must be noted here what an interesting choice Allen made in casting an Irish and a Scot for two East London roles… apparently London doesn’t have any suitable actors anymore?).

As both brothers run into money troubles of the gravest kind, their affluent uncle Howard (played so cunningly and convincingly by Tom Wilkinson) shows up and offers to pay their debts, but only in exchange for the murder of his business rival. What follows is the very polarized struggles the brothers encounter – while one brother feels okay about the murder and has talked himself into justifying it, the other descends into a madness of guilt, fear, paranoia, and an insular sadness.

The running theme of this film seems to be about the precariousness of life. “Life has a life of it’s own,” “Ain’t life grand,” and “To life!” are just some of the lines speckling Cassandra’s Dream, but it also has a very Greek Tragedian-underscore to it. Even Medea is mentioned at one point. A succubus named Angela is thrown into the mix (played by Hayley Atwell, last seen in The Duchess with Keira Knightley) to tempt McGregor’s Ian into further deviousness. Angela, a neurotic actress, even describes herself to Ian in one scene with, “the whole point of my character is to create erotic tension.” While the play she stars in may be loaded with it, this film is not exactly heavy on sexy thrills.

Colin Farell has been playing a lot of hitmen with a conscious lately (see In Bruges for clarity) and his on screen performances are always nuanced and loaded with flashes of emotional brilliance. Don’t let his pretty-boy looks and Casanova-reputation fool you, this man can act and is quite brilliant at it. And while I adore Ewan McGregor (and secretly fancy the pants off of him), I didn’t exactly believe his performance this time around. I think I’d much rather see him on a motorbike in dusty Kazahkstan than in Armani sunglasses and a Jaguar on the English coast.

Woody Allen’s recent change of storytelling-methods is compelling, captivating, and worth the price of admission. But like Match Point and Vicky Christina Barcelona, it’s definitely a hit-or miss.