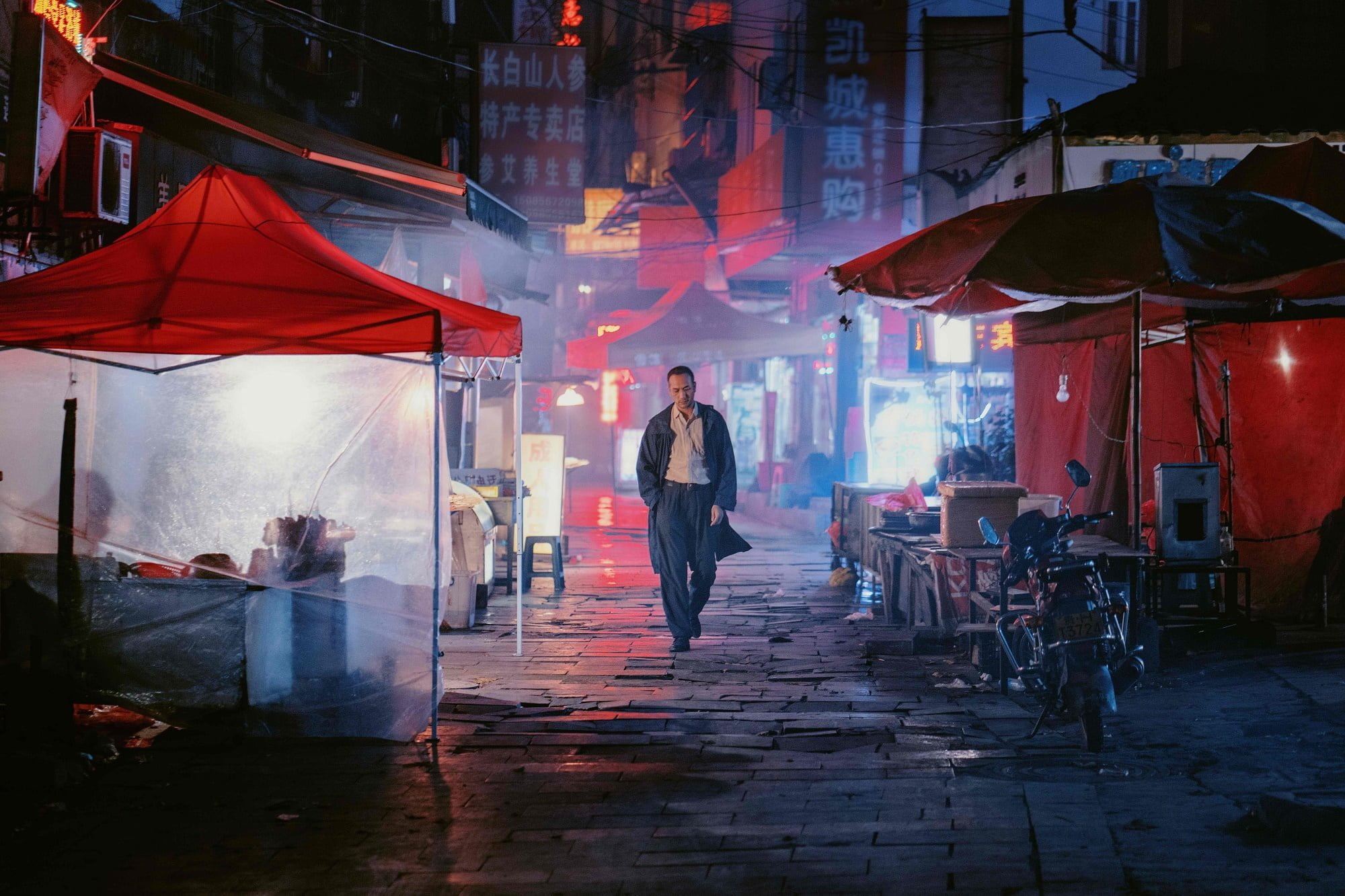 Stark realism, stylish cinematography, and dream-like flights of fancy commingle and enhance one another in Chinese writer-director Bi Gan’s Long Day’s Journey Into Night, a surreal, stunning, and rigorous take on classic film noir tropes and conventions that defies neat and tidy categorization. Divided more or less into two halves – one resolutely earthbound and the other more malleable and ethereal – Long Day’s Journey Into Night looks at lost love and obsession with a resounding emotional yield and remarkably uncompromised artistic integrity. Gan’s work here will likely (and indeed already has) elicited favourable comparisons to the likes of slow cinema pioneer Andrei Tarkovsky, dream obsessed David Lynch, and fellow countryman and auteur Wong Kar-wai, but such glowing praise does nothing to convey the bracing originality of Long Day’s Journey Into Night.

Hongwu Luo (Huang Jue) is a loner who left his hometown of Kaili behind more than a decade ago. While he doesn’t regret leaving the small town behind, Hongwu still pines for the lover he left behind. Not wanting to die drunk and alone like his father did, Hongwu returns home and starts running into a woman (Tang Wei) who looks a lot like his former love. Hongwu doesn’t entirely remember the face he’s looking for, but he remembers how this mystery woman from his past made him feel. Building off his only evidence – a photograph tucked away in a clock with a burnt out face and the number of a women’s prison written on the back – Hongwu begins searching for a new future that might be unattainable.

Long Day’s Journey Into Night is epic visual and narrative poetry told through the language of dime store paperbacks, albeit with the pace considerably slowed. It’s all sweaty nights and neon lights; cigarette smoke, torrential downpours, peeling wallpaper, piercing greens, shadows, reflections, and various forms of cages for animals and human beings alike. It’s about men who are tough talking and overcompensating, and the largely unimpressed women who can see right through their bluster. There’s a crime movie element to Long Day’s Journey Into Night, but outside of a few menacing moments (the implied murder of a hairdresser, a criminal looking-type serenading a man shackled at the wrists with some karaoke, an attempted assassination in a movie theatre shot upside-down), Gan’s film isn’t meant to be taken expressly as a thriller. Gan (Kaili Blues) instead wants to tell a story where the antihero protagonist’s main crime is forgetting to remember or learn from the past. 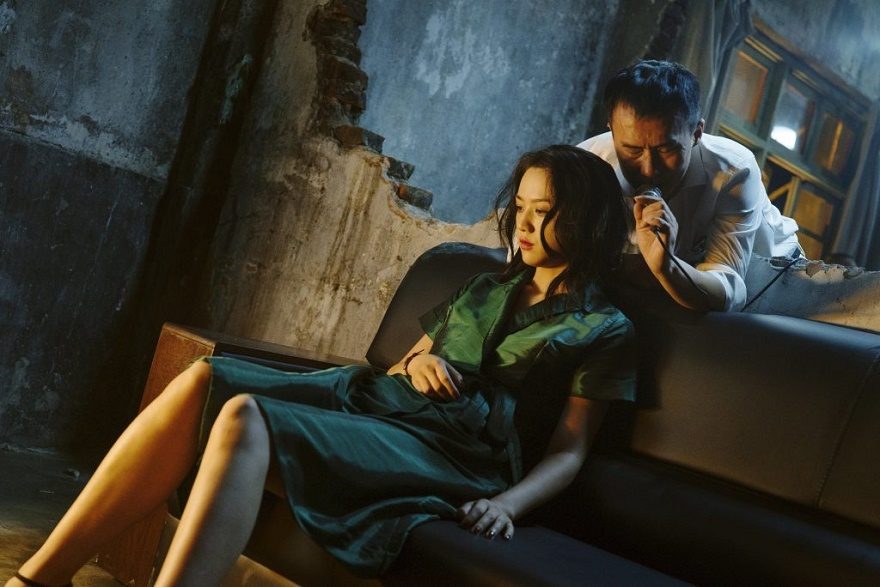 The first hour of Long Day’s Journey Into Night boasts a slick and assured sense of mood, depicting Hongwu’s longing as being a high and hangover at the same time. The complex cinematography and haunting musical score (both collaborative efforts involving multiple craftspeople) are huge assets for Gan, but the filmmaker isn’t afraid of letting the characters and the audience stew in lengthy, uncomfortable silences. Gan’s dialogue is straight out of a mystery or thriller, but it’s delivered without unnecessary melodrama or manipulation. The first part of Long Day’s Journey Into Night strikes as sometimes unbearably realistic, but the style being employed is building towards something grander and more ambitious.

Just past the halfway point, Long Day’s Journey Into Night settles into a dreamlike groove via the film’s pièce de résistance, a nearly hour-long, 3D tracking shot. Hongwu, after having seemingly fallen asleep, finds himself in a strange sort of labyrinth where things don’t make a lot of sense, but he eventually finds the woman that he’s looking for (or so he thinks). Gan doesn’t abandon the restraint of the film’s first hour when taking viewers on such a dazzling journey. The world looks the same as it did before, but the pieces don’t fit, dangers seem more distant, and nothing is altogether impossible. The long take involves a slow paced scooter ride, a zipline, games of ping pong and pool, a town carnival, a perturbed horse, and a switch to a ghost-like overhead view that will make viewers wonder how much planning was needed to pull it all off. There might be longer takes in cinematic history than the one Gan builds Long Day’s Journey Into Night around, but none that are this richly detailed and strange. It’s a marvel of technical ingenuity, but never too showy as to overshadow the rich emotions at the centre of it all. Even more potently in the dream world, Long Day’s Journey Into Night maintains a pervasive sense of  melancholic yearning for a different life.

Gan’s seamless and reasoned meshing of the real and surreal allows viewers to go back over the film’s first passage to pay closer attention to the symbolism being employed on a rewatch, but it’s the meshing of a dour drama with traditional noir techniques that’s even more elucidating. Hongwu has trouble expressing his feelings outside of narration that isn’t always relevant, but usually adds great character depth. In a wonderful and culturally specific move, Long Day’s Journey Into Night uses the logic of dreams and the rhythms of crime stories to talk about taboo subjects. Gan flips back and forth between past, present, dreams, and perhaps even false memories to keep viewers off balance, while constantly playing to classical sensibilities. Different viewers will likely take different things away from Long Day’s Journey Into Night and the sometimes satirical conclusions it draws about modern Chinese culture, but the emotions Gan seeks to convey are unambiguous.

That emotional bedrock allows Long Day’s Journey Into Night to remain in the mind of the viewer long after it ends. The goal of Hongwu is clear, well defined, and based in easily relatable pathos. The road to accomplish this goal is almost impossible to travel; fraught with emotional pitfalls, frustrating asides, and malleable morals. It’s a film about a mystery that can be investigated with some degree of certainty if one tries hard enough and emotions that can be almost impossible to reconcile or reason. And despite its more fanciful flourishes, Gan’s work here feels as real as life itself.

Check out the trailer for Long Day’s Journey Into Night: