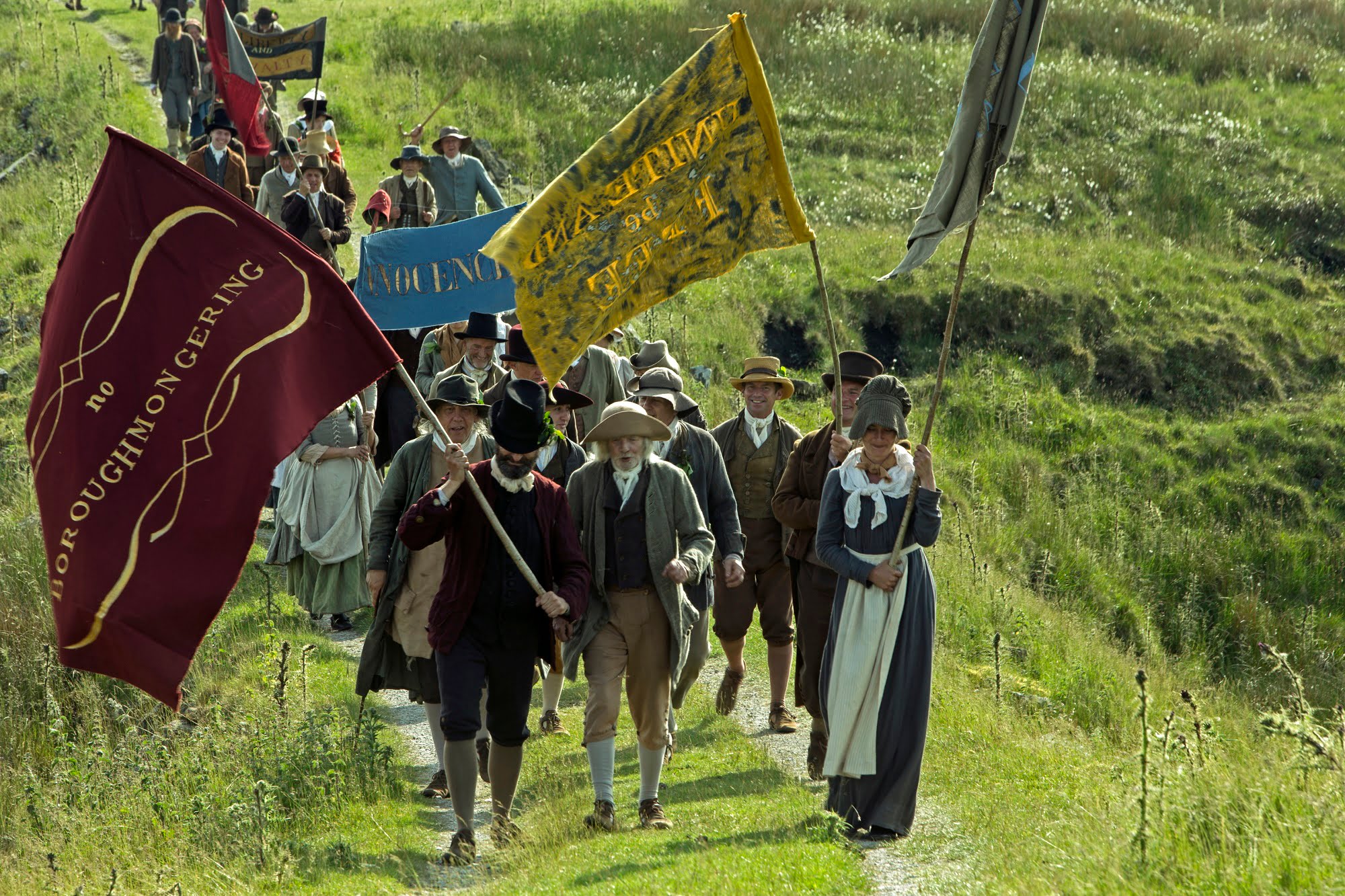 Peterloo, the latest effort from critically acclaimed filmmaker Mike Leigh, is both the British auteur’s most ambitious and least successful effort in quite some time. A retelling of the events and political arguments that led to an obscure, but bloody and avoidable early 19th Century massacre of peasants at the hands of government officials working on behalf of the wealthy landowners and elites, Peterloo is a film that has a great love for language and social activism that gets bogged down by the usually economical Leigh letting his epic get away from him on set and in the editing room. Leigh’s latest isn’t another masterpiece or even a very good motion picture from a filmmaker most cinephiles and critics laud as one of the best living artists today. Instead, Peterloo is an okay and almost forgivably mediocre film that would be a lot more impactful by trimming a full hour or more of repetitive, bludgeoning, superfluous material from its unnecessarily elephantine 154 minute running time.

Not long after the battle of Waterloo in 1819 and the wealthy landowners in the British parliament rewarding their “victory” with a large amount of cash gained from the taxation of peasants, a class war was brewing in the north country. In the impoverished, working class community of Manchester, which didn’t have a representative in parliament, men and women of the citizenry began planning a pro-Democracy rally and demonstration against their unjust taxation to be held on the second Monday in August at St. Peter’s Field. The grassroots demonstration was attacked by the yeomanry working on behalf of worried landowners (who viewed pleas for suffrage as a sickness sweeping the country), killing fifteen and injuring hundreds more who attended the 60,000 person strong rally.

Peterloo gets off to a great start, and certainly shows that Leigh has his heart firmly in the right place. Frequent collaborator and cinematographer Dick Pope lovingly captures the detail oriented nature of Leigh’s epic vision, which comes to the big screen with the director’s largest budget to date. Leigh loves to dote upon tattered flags, bad teeth, battle scars, bustling marketplaces full of unwashed masses, opulent meetings of scornful rich people, and street people singing folk songs to no one in particular. Pope, who’s already a master at making digital cinematography look painterly in terms of how he uses natural lighting, even allows Leigh’s back of tricks to expand to drone and crane shots here during sequences establishing the chaos and trying times bubbling to the surface of everyday society. Leigh has certainly made some gorgeous films across his lengthy career, but perhaps none as dazzling and showy as Peterloo. It’s a shame that one of the world’s most substantive filmmakers can’t align the material with his newfound sense of style with Peterloo. 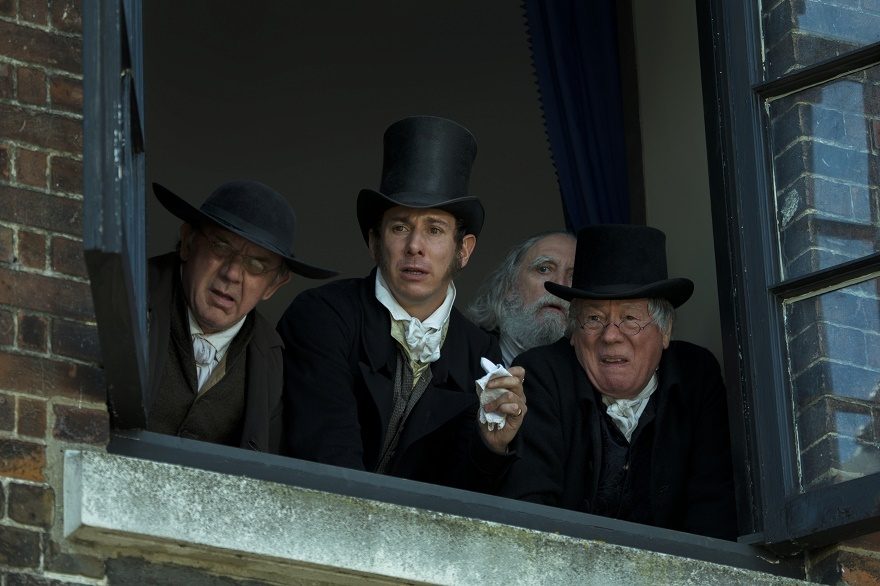 Not long after establishing a handful of characters that could potentially be major parts of his story – a lower class soldier returning from war (David Moorst), a reassigned military general sent to keep an eye on the north (Alastair Mackenzie), a duplicitous spy (Stephen Wight), the head of the Female Reform Society (Rachel Finnegan), a true revolutionary who’s willing to fight for freedom at any cost (Neil Bell), ridiculously highfalutin members of the aristocracy who cover for their own shortcomings with bluster and ignorance, a trio of cartoonishly evil judges who sentence commoners who committed the slightest acts of theft to egregious punnishments – it becomes clear that Leigh doesn’t particularly care about establishing any of them outside the broadest and most annecdotal strokes. Peterloo uses its human characters as chess pieces in a larger love letter to the nature and form of rhetoric.

Even before the great orator (Rory Kinnear) the people of Manchester have been waiting for arrives in town, Peterloo has dispensed with far more redundant and aggrandizingly long speeches about the importance of liberty and freedom than any single film could credibly hold. It’s not that these speeches are badly written, strikingly performed by the cast of little known character actors, or not evocative of the time and place where they were given in history, but rather that no one in their right mind should be forced to sit through fifteen to twenty minute sequences comprised of two or three speeches strung back to back that convey the exact same points with different wording and little deviation.

It’s understandable that Leigh wants to take viewers back to a time where words and their passionate delivery actually meant something more than they do today. At the same time, without building up the characters to invest in their fight beyond hoping that they survive the historical event we all know is coming, these words are more indulgent than impactful. It’s a frustrating and misguided choice from a filmmaker who rarely minces words in his scripts. Over half the film is comprised of lengthy speeches and conversations, with some scenes talking about the exact same issues without moving the film along. A sizable chunk of Peterloo could be excised and nothing would be damaged in terms of the film’s message.

And it is an admirable and timely message. Now more than ever people need to be reminded that they need to fight for their voices to be heard and to stand up to oppressive, elitist, out of touch politicians who stay in office just to get rich and stay rich. The events that happened in St. Peter’s Field and issues discussed in Peterloo are as relevant today as they were back then. These conversations are still happening, and part of me thinks that Leigh’s rigorous, wordy approach here is in service of drilling those points home and throwing subtlety to the wind in the process. There’s something invigorating and certainly impassioned about such an approach, but it doesn’t make Peterloo any less of a well intentioned slog to sit through.

Peterloo opens at TIFF Bell Lightbox in Toronto on Friday, May 17, 2019. It expands to Montreal on May 31 and to additional Canadian cities throughout the summer.

Check out the trailer for Peterloo: