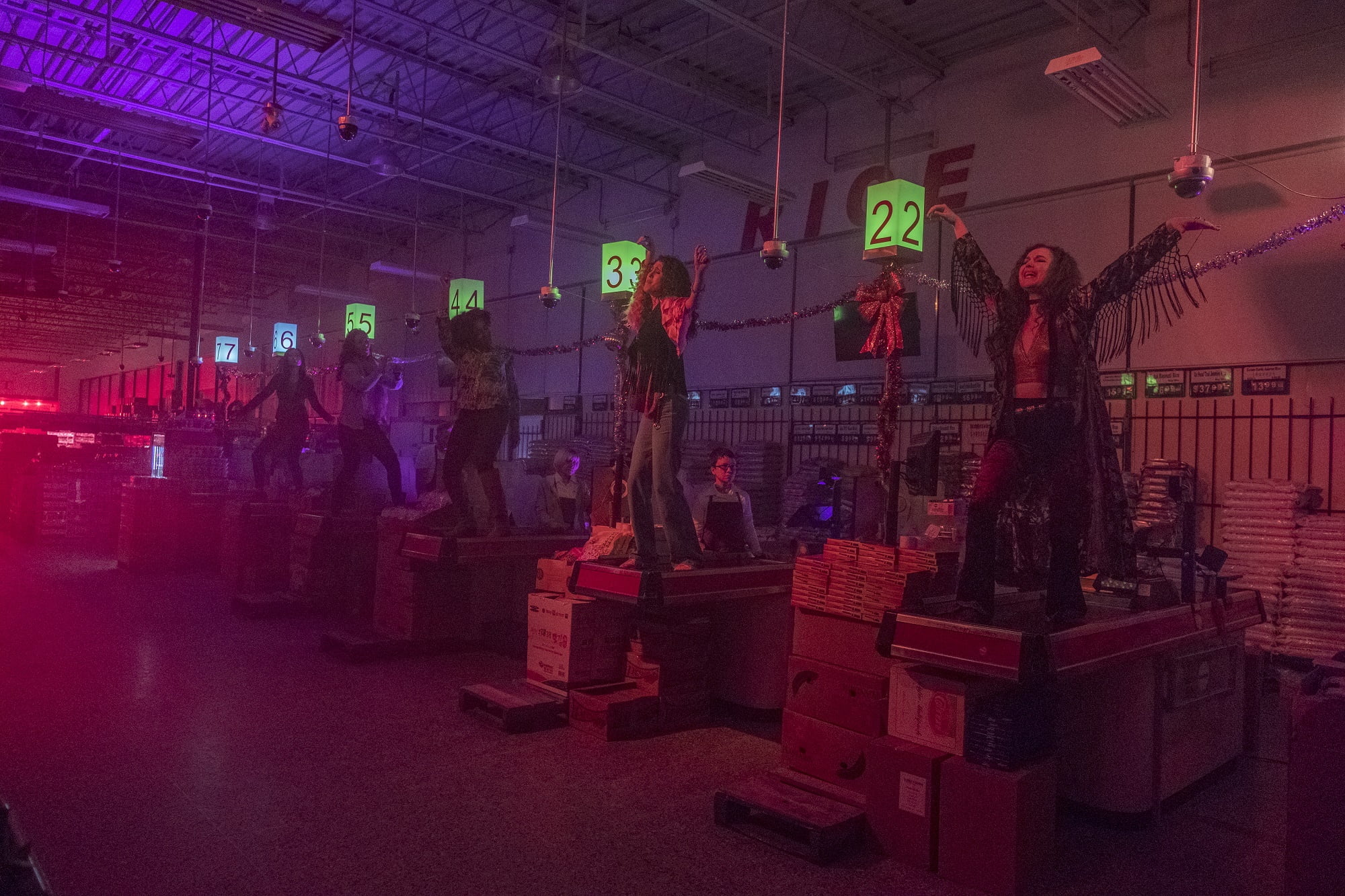 Although it never fully shakes off the shackles of its stage play roots, Canadian director Patricia Rozema’s big screen production of writer-stars’ Amy Nostbakken and Norah Sadava’s Mouthpiece is a moving look at self-doubt, grief, and the contradictory, but well reasoned viewpoints that fight for dominance in all of our minds. Rozema (I’ve Heard the Mermaids Singing, Mansfield Park, Into the Forest) does an exceptional job of turning Nostbakken and Sadava’s previously stripped down and sparse play into a gorgeously photographed big screen extravaganza, and while the transition from stage to screen isn’t seamless (and the budget still understandably modest), all of the emotional power and thoughtful provocation remains importantly intact.

Cassandra Haywood, a thirty year old, straight, female writer from Toronto, has just suffered the shock of learning that her mother, Elaine (Maev Beaty), passed away from a reported stroke. Mouthpiece, set during the December holiday season, starts off shortly after Elaine’s death and 48 hours before the funeral. Initially, Cass’ aunt, Jane (Paula Boudreau), tasks the young woman with procuring the flowers, snacks, and refreshments for the post-funeral reception, but she quickly has other duties – like selecting the casket and picking out her mother’s burial dress – dumped into her lap along the way. On top of all this, Cass has decided to deliver Elaine’s eulogy, partially to take the weight off her brother, Danny (Jake Epstein), who just had a kid, but mostly to confront and put to rest conflicting feelings that she’s had about her mother since a contentious fight at last year’s family Christmas party.

Cassandra is played by Nostbakken and Sadava concurrently throughout Mouthpiece (with Taylor Belle Puterman and Sarah Camacho subbing in during flashbacks to Haywood’s younger years); sometimes in tandem with each other, but most often with the actors tagging in an out of the role based on what’s required of each scene on an emotional level. They’re both the same person, but they express themselves differently to those around them and have diverging opinions on their mother’s life and legacy. One half (Nostbakken) is stronger, more confident, boisterous, reserved, and tightly wound. This half of Cass’ personality thinks that mom was “a ball buster” and that she squandered away her life’s potential. The other (Sadava) is more passionate, caring, unafraid to cry, and self-effacing; preferring to think that Elaine, despite her obvious shortcomings, did the best she could balancing her role as a single mother coming out of a messy divorce and making further sacrifices for the sake of her career.

Mouthpiece, which takes its dual casting of the leads straight from the play’s writers and leads (with Rozema credited for the screenplay alongside them), doesn’t shy away from the surreal nature of the material. There’s no disingenuous visual trickery employed by Rozema to add any further layers of subtext to Nostbakken and Sadava’s play (which wasn’t much more than the two performers on stage), and it’s the right decision. Although she’s from a different generation of writers and performers than her younger collaborators, Rozema makes Mouthpiece into an unabashed movie made for young people who might be struggling at similar points in their life. It’s a genuine portrait of the frustration, stress, and feelings of inadequacy that often go hand in hand with grief, especially for young women. 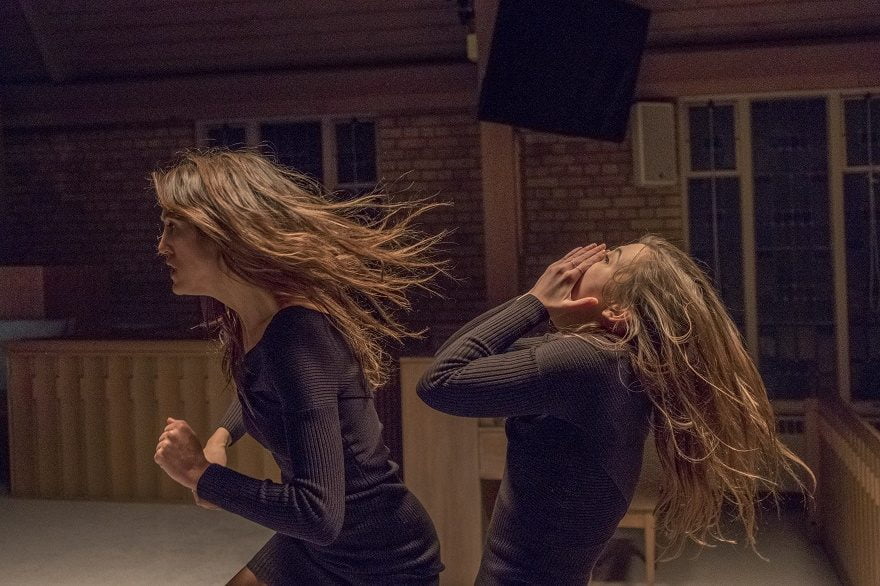 As if it wasn’t surreal enough to watch Cass literally arguing with herself through two different performers, Mouthpiece adds an extra layer of emotional strangeness during frequent deep dives into the main character’s psyche. Rozema transitions in and out of these moments like she’s directing a musical, with lighting slowly changing, sets metamorphosing into something different than they appeared to be seconds earlier, and any external noise and stimula from the outside world being pushed into the background until it almost isn’t there at all. Mouthpiece could easily be defined as a musical of sorts. There are a couple of songs and plenty of moments that take place in a heightened plane of reality for Cassandra, but it functions best as an examination of the nuts and bolts aspects of loss and the internal torment it causes. One moment, Catherine Lutes’ eye popping cinematography might look like Rozema was shooting guerilla style on the streets of Toronto without permits, and seconds later people might be dancing atop the checkout lanes at a grocery store. It’s a testament to Rozema’s strengths as a filmmaker and the material’s emotional intelligence that these wild transitions feel organic and reasoned rather than forced and flighty.

Mouthpiece, through its abundance of style and emotion, looks at any number of topics that could arise following the death of a loved one. What moments mattered in the life of the person who died? What did those moments mean to us? Where do we go in our own minds when things start to feel overwhelming? Are any of our coping mechanisms meant to insulate us from the fear of death helpful? How do we let go of perceived slights and misdeeds? How does a person’s death cause us to recontextualize their life and what they’ve accomplished? What sacrifices does a woman have to make for the sake of career and family, and how are those choices manifested and interpreted by their children? How much pressure does a child who lost a parent feel to continue the family legacy, especially if they never paid much mind to raising kids of their own? Should we fight learned behaviours and responses passed down by the previous generation, or should we accept them for what they are? From scene to scene, Mouthpiece is always tackling each of these issues; frequently at the same time without ever speaking down to the enormity of any of them. It might seem like a stylistic gambit to build Mouthpiece around two actors playing the same character, but it’s actually a necessary addendum to the material. If you don’t see these questions being chewed on visually, it wouldn’t amount to that much of a movie or play. Heck, it wouldn’t even amount to much of a book, if you think about it. Mouthpiece wants to depict life as an ongoing dialogue a person has with themself, and one that’s often muddied by tragedy, sudden life changes, or even through stagnancy.

But as weighty and perceptive as the material is, the transition of Mouthpiece to the big screen still bears the markings of a stage play being blown up to greater proportions. While Rozema and Lutes have found ingenious ways of turning Nostbakken and Sadava’s play into something cinematically sleek, stylish, and dreamy, the script and performances stumble a bit in adaptation. There has been some obvious padding and lengthening added onto Mouthpiece, and there are a handful of flashback sequences that don’t add much to the story that Cassandra doesn’t already expressly tell to the audience. I get that in a film you have to show and not tell as much, but here that equilibrium is slightly off, sometimes bordering on redundancy. Similarly, Nostbakken and Sadava – while both charismatic performers who explicitly and implicitly understand their characters inside and out – deliver somewhat inconsistent turns. In some scenes, the actresses show a remarkable amount of naturalism, while others act like they’re overemoting to make sure the people in the back row can hear them.

But in spite of those stumbles (which might be a side effect of the film coming so closely on the heels of the play and not having much room to have newer life breathed into it), Mouthpiece has exceptional emotional integrity and insight. Anyone who has felt the sting of loss – especially when it comes to losing someone they had conflicting opinions about – will see a small part of their own struggles in Mouthpiece. It’s a visual and dramatic representation of perpetually undefinable, mutable, and ever changing emotions that stays true to such experiences by never being afraid to get a little weird and strange. It’s also Rozema’s tightest and most fascinating work in quite some time.

Check out the trailer for Mouthpiece: