The Fireflies Are Gone

Quebecois filmmaker Sébastien Pilote reaffirms his status as one of Canada’s best working filmmakers with the quietly observational and emotionally grounded coming of age story The Fireflies Are Gone. Although Pilote’s third directorial feature revolves around a young woman instead of an older man and is also a bit lighter in tone, The Fireflies Are Gone is another stellar example of the filmmaker’s ability to create exemplary character pieces where the plot isn’t a contrived situation, but rather the impact that daily life has on the protagonist. He makes delicate films that feel relaxed and lived in. Pilote is a filmmaker that wants people to get to know his characters, understand their troubles, and experience life alongside them without tethering them to a higher concept. It’s a film – like The Salesman and The Auction that came before it – that moves at the speed of life, and yet never wears out its welcome through false moves, indulgence, or unnecessary convolution. Not every moment spent with Pilote’s characters is joyous or triumphant, but they’re always fruitful and enlightening.

Léonie (Karelle Tremblay) is a high schooler in a small Quebec town about to start her summer vacation and celebrate her birthday. Her image conscious mother (Marie-France Marcotte) is married to a local, right-wing talk radio blowhard (François Papineau), and Léo can’t wait to be older and more independent so she can be rid of both of them. She idolizes her father (Luc PIcard), a former union leader for the town’s biggest employer who was essentially run out of the community after striking for a better deal backfired; now only returning to see his daughter from his new job for about ten days every several months. Léo doesn’t hang out with many people her own age, and the immaturity of teen boys seems to be a turn off. At the local diner she frequents, Léo repeatedly runs into Steve (Pierre-Luc Brillant), a middle aged guitar teacher who still lives in his mother’s basement. They banter for a bit here and there, and Léo decides she wants to start taking guitar lessons and getting to know more about him. It’s not immediately clear if there’s any sort of romantic spark between Léo and Steve (and if there is, he’s definitely fighting the urge to be with a much younger woman), but their differences could threaten their friendship. He has no desire to leave the comfortable world he’s created for himself, while she’s adamant about leaving town and convinced that Steve isn’t living up to his full potential.

One initially worries from the premise that The Fireflies Are Gone could be heading in an uncomfortable, socially uneasy direction, but thankfully Pilote never gives in to such impulses. Pilote is less interested in depicting any potential love story than he is examining the conflicting and contradictory ideologies of his characters. There’s never much of a question about Léo’s quest for independence, but over the course of the summer, she’ll learn a lot more about her parents and herself that could alter her direction slightly. It’s also doubtful that Steve would ever give up his resolutely dependent existence unless he was forced by circumstance. Léo has been kicked around by life and watched her family name both dragged through the mud (via her biological father) and unnecessarily inflated again (via her stepdad), and she yearns for the consistency that Steve seems to represent. It’s also clear, but never fully explained, that Steve hasn’t had the easiest life, but he seems to take setbacks worse than his proactive young protegee. They’re perfect for each other, but only as friends and sounding boards. They both have strong opinions on various topics from politics to music, but they don’t share them with just anybody; only with each other and sometimes only when cornered by other external forces. 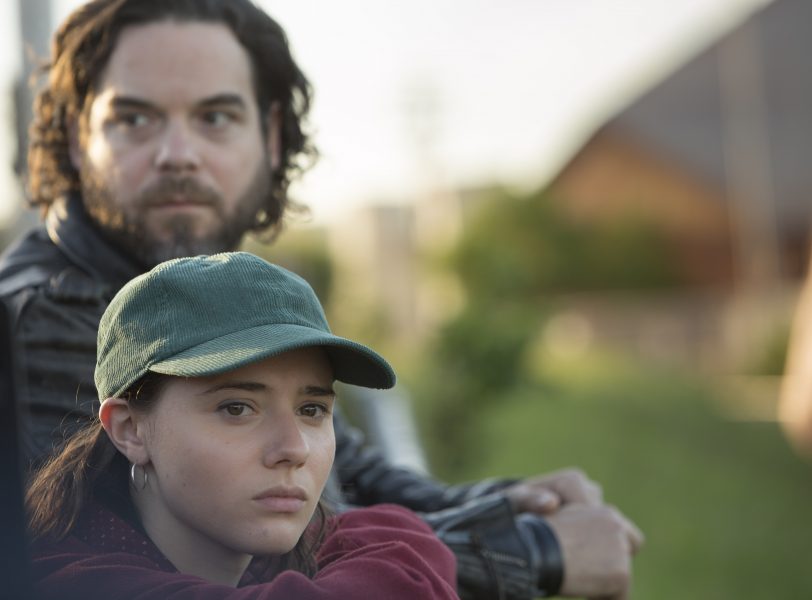 Pilote has set all of his films to date in locations not too far removed from the environment he grew up in, and the director shows that he has studied the intricacies of small town malaise well. The environment around the characters is picturesque, but curiously void of stimuli. It’s a typical suburb filled with smoothed out edges, not much forestry (hence the title), and plenty of quiet roads leading to rows of identical looking houses. Pilote captures everything gorgeously, but it’s clear that there’s not much to this town than the obvious.  It doesn’t take long for one to identify with Léo’s sense of restlessness. For someone who’s already frustrated and unhappy, Lac-St.-Louis seems like a horrible place to kill some time and wait for something better to come along. Pilote puts his previously underutilized talent for observational, deadpan humour to great use here, finding new and creative ways for characters to remark upon how little there is to do in town and how few opportunities there are.

As Léo learns more about the community around her, The Fireflies Are Gone becomes a richer experience. As Léo’s understanding expands, so too does Tremblay’s remarkably layered performance. Tremblay does a tremendous job of transforming Léo from a somewhat stereotypically frustrated teenager into a young adult who has concrete reasons for feeling so stifled. The Fireflies Are Gone isn’t a boundary pushing look at a potentially taboo relationship or just another tale of someone desperate to escape their humdrum life. It’s a search for self in the truest sense, and Tremblay understands the intricacies of Pilote’s material perfectly, getting nice assists from Papineau and Picard in their pivotal, but smaller supporting roles.

The Fireflies Are Gone might be Pilote’s most hopeful and light-hearted work to date, but that doesn’t make it any more resonant than his previous films. It’s a story about people doing whatever they have to in a bid to get through the day, but Pilote wants viewers to get to know them rather than merely feeling sorry for their plights. It’s a nice movie for an emotionally ugly, but perhaps not irredeemable, world.

Check out the trailer for The Fireflies Are Gone: