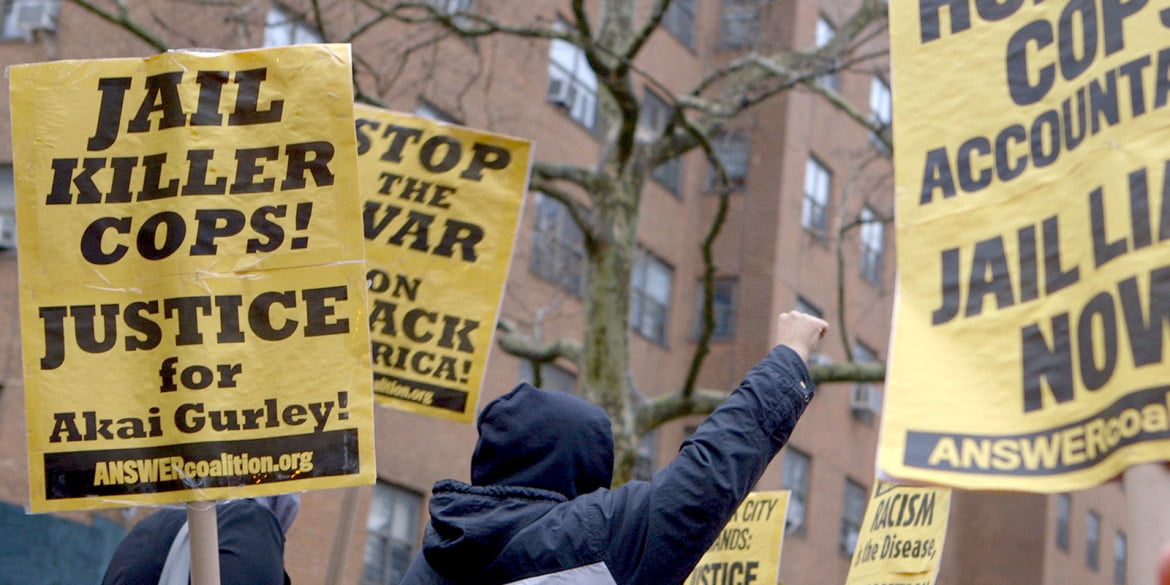 Timely, powerful, complex, and necessary viewing, Ursula Liang’s documentary Down a Dark Stairwell uses one of the most prominent recent examples of racialized police violence to examine the ways that white privilege and supremacy can tear communities apart just as they should be pulling together.

In November of 2014, Akai “Bliss” Gurley was shot in the stairwell of a community housing building at 2724 Linden Boulevard in Brooklyn. Police had been performing a “vertical patrol” in the darkened stairwell, and Gurley was killed by police officer Peter Liang, a Chinese-American with less than two years experience on the job. The shooting was unprovoked, Gurley was completely innocent and unarmed, and neither Liang, nor his white partner, did anything to assist Akai’s partner and mother of his child in performing any sort of CPR or medical assistance. Coming mere months after the choking death of Eric Garner in Staten Island, the Brooklyn D.A.’s office charged Liang with manslaughter and criminally negligent homicide, making him the first NYPD officer to be charged in an on-the-job shooting in fourteen years. The black community in the city and Gurley’s family call for justice, but in the Chinese community, things are largely a different story, with many calling for the shooting to be deemed an accident and for Liang to not be branded as a “scapegoat.”

Down a Dark Stairwell finds Liang embedded with both Black Lives Matter activists and Chinese-American protestors over the lengthy course of Liang’s trial and sentencing. Both Asian and black communities have been targeted by police officers acting out of line, and while there’s a certain amount of common ground to be found between the opposing argument, there’s a large gulf between them when it comes to the Liang case. While there’s no question that Liang shot and killed Gurley, members of the Chinese community wonder why – after so many years of pain and suffering for the black community in particular – why the only NYPD officer charged in an officer related shooting had to be a racialized one. On top of that, why aren’t any of Liang’s partners being charged? Down a Dark Stairwell shows that it’s a difficult argument to make when the optics of the Chinese-American counterprotests to the Black Lives Matter activists seems to thrive on ignoring what should be a simple case of searching for justice for Gurley’s family and loved ones.

Down a Dark Stairwell is an example of a situation where there aren’t any winners or losers, but rather minority communities that are once again pitted against each other by placing white needs over their concerns. Liang delicately shows the various ways that protestors have to delicately craft their messages without seeming racist themselves, often touching on open nerves in both black and Chinese communities. Liang, who speaks with leaders on both sides of the protests, is there for some thoughtful, but heated arguments that should be food for thought when one considers anti-black racism. The love and grief expressed by Gurley’s loved ones comes across painfully and poignantly, while the frustrations within the Chinese-American community are palpable and understandable, if sometimes misguided and tone deaf.  While the Chinese-American protests might be wrong in calling Liang “a scapegoat” – since the officer unquestionably did what he was charged with – it’s the community’s fears of being aligned with his actions that unspokenly fuel their advocacy.

Liang’s film is an uncomfortable, depressing, and unmissable snapshot of police violence and what it means to be a person of colour today. Down a Dark Stairwell doesn’t sit down with many white people (who perhaps unsurprisingly and callously tend to say out of this particular argument for the most part), but supremacy and privilege hang over these protests like thunderclouds. It’s a case where none of the facts are ambiguous, but the things that remain unseen and unsaid are the mitigating factors that led to an unspeakable tragedy.

Down a Dark Stairwell screened online as the opening night film at the 2020 Reel Asian Film Festival. It is slated to air as part of PBS’ Independent Lens series on April 12, 2021 at 10pm EST. Stay tuned to local listings for further details.