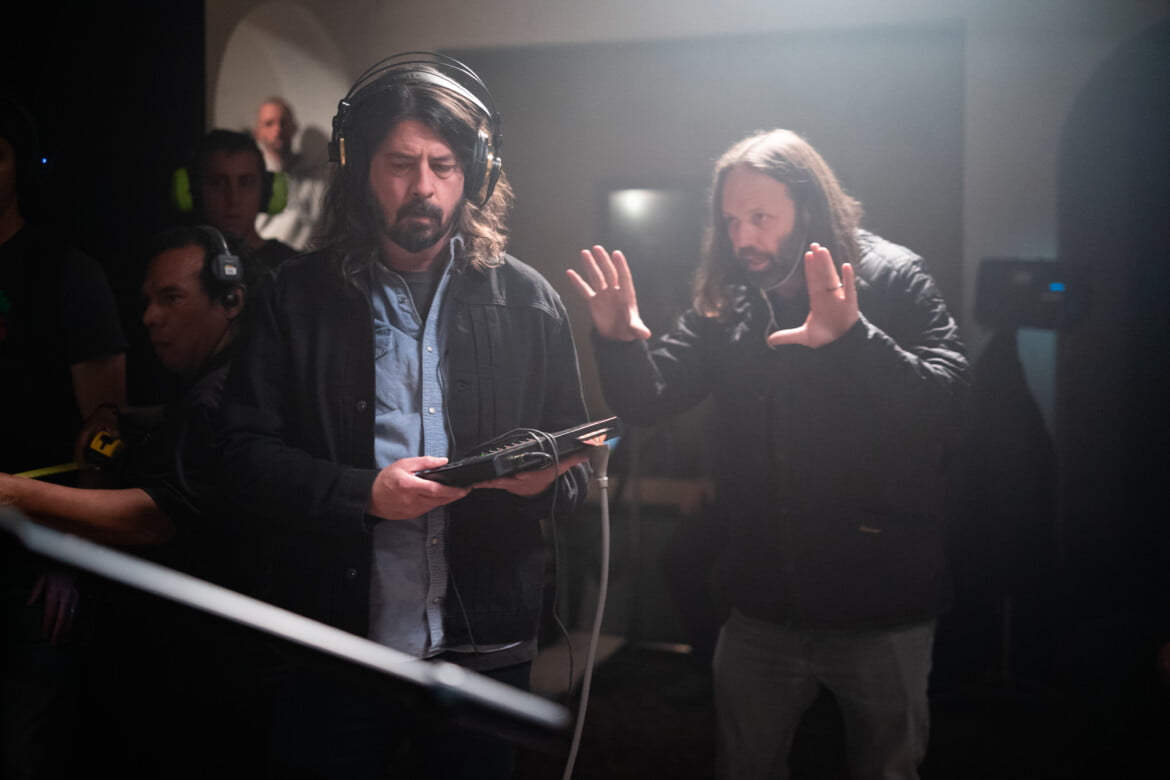 Mom always said music was evil… maybe she was right.

Studio 666, now out in theatres, finds rock band the Foo Fighters in a musical slump. Their record label rep offers a solution: rent a creepy mansion to get their creative juices flowing, discover a new sound and record their tenth album.

Director BJ McDonnell recently spoke to me about the horror genre, mixing humour and scares, tropes and killing off the Foo Fighters.

After serving as a camera operator on so many horror movies – including Annabelle Comes Home, The Nun, The Curse of La Llorona, The Conjuring: The Devil Made Me Do It – what do you love about the genre?

BJ McDonnell: “For me, when you get to work on sets of horror movies, you get to see something that you are not normally going to see on a set everyday… you get this fantasy world. You create these scares. It’s a whole different world that you are working in.”

“Coming up artistically with the shots and being creative is what I love about the horror genre. I love being scared. I love turning out all the lights off in a house and watching a good horror film. I know whenever I’ve done a movie, and I watch it when it finally comes out and I still jump, I know we did our job. I love that.”

Circling back to your horror film credits, how did they prepare you for Studio 666?

McDonnell: “I think it’s a mix between not only the horror films that I have worked on, but I have also done a bunch of comedies, like a bunch of Seth Rogen comedies. There’s The Neighbors and The Interview, which I had a great time on.  I’ve learned, which translated to this movie, we did a lot of improv with a lot of the actors and letting the actors say what they want to say.”

“If you have people like the Foo Fighters, who are playing themselves and not a character, letting them be themselves was great. We got amazing performances, even hilarious stuff that wasn’t on script. Mixing that with the visuals of a horror film and what I have learned working on sets–with the fog, the backgrounds, the lighting coming through and the scary set pieces–it’s not an easy thing to do with the comedy and the horror and do it right. I learned a lot making this movie and putting those two worlds together. It’s tough, but I am very happy the way it turned out.”

As you mentioned, this cocktail of genres is tricky to pull off. What was the learning curve for you?

McDonnell: “I knew what we were going to do horror-wise. That wasn’t stressful. Mine was more of, ‘I am working with a bunch of musicians that have done great music videos, not so much the dialogue that they have to do. It’s just visuals. If you shoot a scene and they do some funny stuff, that’s great.'”

“But when you have to get the dialogue and performance, and follow a script and a story… I was a little concerned about that before I got started. Once we got in with the guys, and we talked about it and let them be their selves, it got to be a very comfortable situation. I just went with the flow with how they were performing.”

“Obviously, keeping things on track and letting them know the emotions of what happened. ‘So, remember in this scene that you are doing right now, in the scene before that, you guys just saw this body and you guys have to be scared.’ ‘Oh yeah, yeah. OK. Cool.’ They’d come running in and do their thing. It was a good time doing it that way.”

Not every musician is destined to be an actor. How surprised were you by the Foo Fighters?

McDonnell: “They were awesome. What I loved about working with these guys was the fact they were very into it. Sometimes you can work with people and acting isn’t their thing. They are musicians. I’ve been on sets where I have seen that. They just go with the flow and people tell you what to do. But these guys, I believe, would go home at night, read their script and see what they would have to do the next day. They would try to learn their lines as best as possible, and they were really good at it. That was the fun part of the whole thing. They were very serious with it. After the first couple of days, I took a deep breath and was like, ‘This is good. This is going to be great.'”

We know that the Foo Fighters hole up in a mansion to record music. What could possibly go wrong?

McDonnell: “When you are going to a creepy mansion to record an album and you hear some sounds, and when you are testing out the living room and it is kinda spiritual, I think most people would run for their lives. I would. But I guess not the Foos. They are going to get the best sound possible. Who is going to tell them if this is the best sound? That is what is fun about the whole thing. Without giving anything away, you see what happens as the story goes.”

Studio 666 has been described as old school. What does that mean to you in terms of tone and scares?

McDonnell: “When me and Dave [Grohl] talked about the movie and what we were trying to accomplish, when you have the whole band in one movie, I wanted to approach this thing like the films I would turn the TV on as a little kid and see [like] the Beatles movie, and they were doing their own thing.”

“Or I would see the Monkeys TV show or KISS. There was always a cool vibe about that whole thing, where it didn’t take itself crazy serious and it was still a fun movie to watch. I wanted to keep the comedy going along the lines of that, and make it feel almost like one of those old-school band films in that way.”

“But then, we wanted to take that vibe and mix it with a horror vibe and see where we went with that. Honestly, when we first started, I was like, ‘I hope this works.’ When we started getting more and more into it, I knew we were going to be alright and that it was going to come together really well. Maybe somebody has made a real horror movie with bands, but I can’t recall one.”

What were some of the music tropes that you wanted to play with?

McDonnell: “We talked about heavy metal. We talked about metal music. Metal sometimes gets a bad rap. There’s a lot of imagery. If you look at their album covers, they are kinda horrifying. Those things go hand in hand. When a band like the Foo Fighters is going into a house and Dave basically steals this sound, it was more of a metal-vibe.”

“Then you learn about the lore of what this band was in the 90s. We wanted to keep it in that realm, of going more of the lore of what people in the 80s were like, ‘Oh my God. Ozzy Osbourne bit off a bat head. Or my kids heard that record and played it backwards. It made them do bad things.’ That was the mix of what we were trying to go with in this one.”

How much fun was it knocking the Foo Fighters off one by one? And how game were they for the murder and mayhem?

McDonnell: “It was always a blast. We knew we were getting to these moments of what was going to happen. Any time you are on a horror set, it’s always fun knowing you are about to do some special effects gag. It was even more fun because the guys really haven’t been on a horror set. They would see a lot of the process of how we had to do it, or what we had to do to make certain things work. It was a great payoff because once things would start flying, and we used mostly practical effects, they would have to stop and laugh.”

“They just had such a good time with the whole thing. They really made it a great experience for the whole crew to be running around with for all those days.”