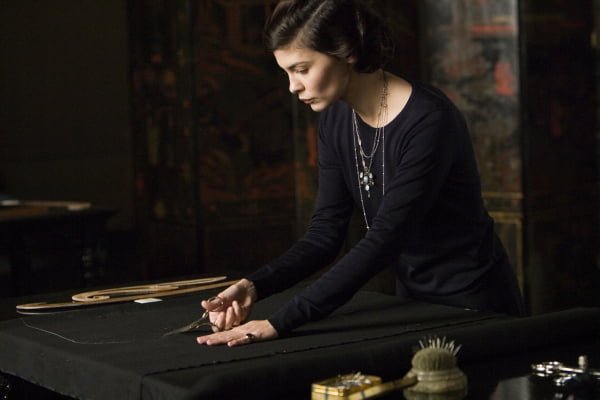 Starring everyone’s favourite French cross-over actress Audrey Tautou as Chanel, we follow Gabrielle (or “Coco” as she is affectionately called by her circle of friends after a popular French folk song she sings in nightclubs) from her adolescence in an orphanage after she and her sister are abandoned by their father, through her life as a struggling seamstress without education or notable relations, to the early love affairs and relationships that shaped her view on life, success, marriage, and most of all, love (and the disasters therein).

Those looking for insight into her original inspirations and forays into fashion design will be somewhat disappointed, as this is more about a young girl who rages against everything canonically feminine for her time – corsets, frilly hats, falling in love, posturing, acquiring wealth, and marriage. Chanel, believing that love and marriage are “boring,” engages in an affair with millionaire playboy Etienne Balsan (played by Benoît Poelvoorde), who pays her way in exchange for her charms, but he doesn’t offer her respect or dignity, even hiding her away from his socialite friends out of shame. However, when his colleague Arthur “Boy” Capel (played by American actor Alessandro Nivola), a coal tycoon with secrets of his own, comes into her life, Chanel is exposed to her first pangs of real love, desire, and acceptance. But, as most biopics go, tragedy looms in the near future, and Coco must decide whether to marry and gain the financial stability she longs for, or control her own future and live by her own earnings.

Tautou is marvellous in this role, a real departure from the quirky, introspective, jolly characters (Amelie, A Very Long Engagment) she’s played in the past that we’ve come to expect from her. Her portrayal is of honest anger, bitterness, but also ingenuity, and with a real hunger for something that even she has trouble expressing. She can’t decide if she enjoys singing or acting or making hats for Balsan’s famous friends. She doesn’t know fashion stardom is in her future, but she’s striving for greatness nonetheless.

Nivola is the scene-stealer of this, however. His depiction of a man earnestly in love and torn between his demons and Chanel is compelling and there’s a fire behind his eyes. It is interesting to note that Nivola learned how to speak French specifically for this role, and his accent, despite subtle flaws, is near-perfect.

Even if this wasn’t a biopic, it would still be a ravishing film to behold, with Catherine Leterrier‘s exquisite costume design and Alexandre Desplat stirring musical soundtrack. Drawing parallels to the life and novels of Jane Austen, there is no shortage of strong female stories, endeavouring to survive in a man’s world without having to rely on one.