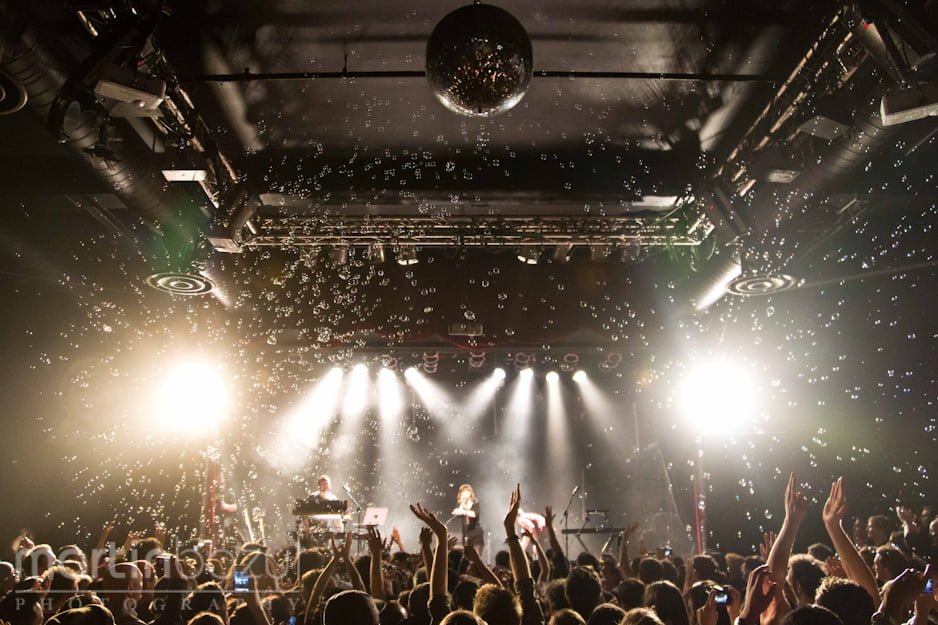 The show with probably the most buzz at Canadian Music Week might have been out of Scotland. Electro pop band CHVRCHES made their Canadian debut with a sold out show at the Virgin Mobile Mod Club on Wednesday, March 20. The band landed in America for the first time, played SXSW and promptly won the Inaugural Grulke Prize for Developing Non-U.S. Act. Of course, all of this was merely a warm up for Canadian Music Week, right?

CHVRCHES came out to rapturous applause, and immediately provided a big sound. And then the petite Lauren Mayberry made an appearance in stark contrast to that sound. Her stage presence was lacking a little, as she barely moved around the stage throughout the night, choosing to play with the microphone cord as she sang instead. However, her dominant vocals over the electronic and often complex beats more than made up for any jumping around on the stage.

With only a few singles released to date, and a new EP out the week after the show, the band played several new tracks from an upcoming album. The standout new track was Gun, with its absolutely thumping chorus. Another new track, Science, was fairly anonymous until a great synth line near the end, which when mixed with the pulsating beat, took the song to another level.

The band played all of the crowd favourites – The Mother We Share, Recover, and Lies. These tracks all came off without a hitch in the live setting, with Mayberry providing powerful vocals throughout. CHVRCHES even threw in a cover of Prince’s I Would Die 4 U as an encore. They brought a big, electro synth pop sound to Mod Club, with a great (and easy on the eyes) vocalist and had the crowd dancing. Don’t expect the buzzzzzzzzz to die down any time soon. 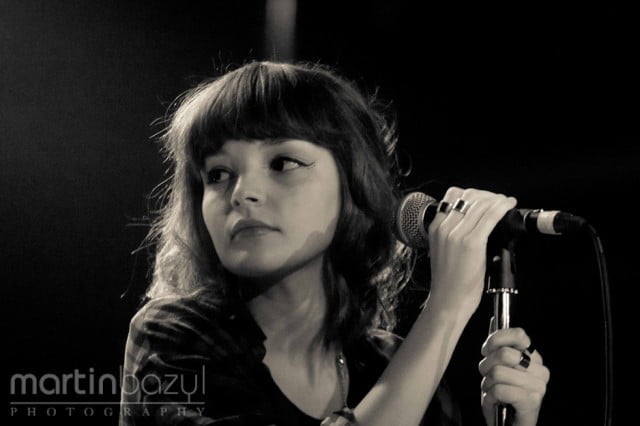 Vancouver indie pop band, The Zolas, hit up the Rivoli on Thursday as part of Canadian Music Week. For a band that lost their drums and synth temporarily due to airline incompetence, they seemed in good spirits. Lead singer Zachary Gray oozed sexiness (I’m saying this as a totally heterosexual man), staring into the crowd and swaying from side to side. Zach moved his arms and was in constant motion throughout the night, always staring into the crowd – he subtly owned the stage.

Zach also hilariously noted that “I’ve seen no bands, as I’ve slept for two days. I’ve been drinking olive oil and it feels great. No one can use this mic now. Sorry, secret guest” (who turned out to be Treble Charger).

The band’s most popular song, Knot In My Heart, ‘popped’ in a live setting, getting the crowd to bop along. The band ran through other newer tracks like Ancient Mars, Strange Girl, and closer Escape Artist. I would’ve liked to hear a few more upbeat tracks, such as Observatory, but that’s just me being a picky asshole. Overall, a solid set which definitely won them some fans. 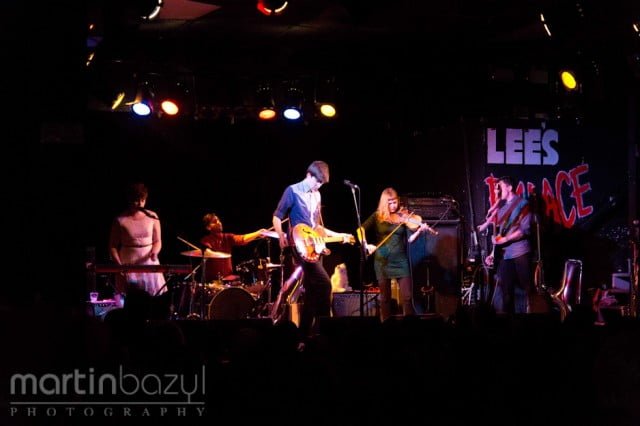 Former Starbucks track of the week honourees, Rah Rah, played Lee’s Palace as part of Canadian Music Week. The Saskatchewan band were short a member, as Leif Thorseth is temporarily not with the band. That observation aside, the band bring some high energy – everyone in the band were immediately engaged in the show.

What the hell was with that white animal on the amp?! I initially thought was a dog, but closer inspection reveals it is a cat. I guess they have mechanical cats in the prairies because the real ones die of boredom. Yup, I went there.

The band members were jamming, dancing, jumping, and all over the place – pretty much everything you want from live performers. The crowd at Lee’s definitely gave Rah Rah some love.

Rah Rah started strong, opening with Art and a Wife. The band was constantly switching up instruments, drummers, and stage positions. Whether they meant it or not, they seemed to emulate Arcade Fire, by standing on their amps, using walls and other objects as percussion instruments, and so on, to varied success. The band started promising, with the middle of the set creating a bit of a lull, before rescuing it at the end with closer First Kiss. Fans went home happy, and immediately looked up Saskatchewan on Google Maps (just kidding, prairie children).