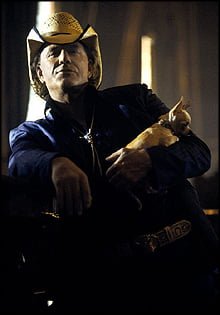 Just ask Johnny Depp or Sean Penn or Brad Pitt about Mickey Rourke and you’ll get an earful of animated praise for Rourke and his work.

But Mickey Rourke self-destructed in the most public and blatant ways possible…and he knows it too. He thought he was bigger than the game itself and that wound back on him and bit him on the ass. The Pope of Greenwich Village, Angel Heart, Johnny Handsome, Year of the Dragon, Barfly… all wonderful, resonating performances, but no one went to see any of them and that meant all the publicity in the world wasn’t going to sweet him up to the Hollywood studios.

Chris Heard: “Was their something fundamental that happened that caused your career to fizzle, or was it a kind of sum total of a bunch of different things?”

Mickey Rourke: “Listen man, it was all me, man, all my fault. It was the combination of a lot of things, some of the things were buried so deep inside me I didn’t even know they were there. I had a lot of anger inside me and that came out at times that were not particularly advantageous to me career-wise.”

CH: “I spoke to a few studio executives recently and they all, to a one, said that they were ‘scared of Mickey Rourke’.”

MR: (Chuckles) “Yeah, I have heard that a lot over the last several years and again man, I had that coming, I gave those fuckers reason to be afraid of me.”

CH: “Is it true that you lost out on a big thriller [What became the over-hyped, truly mediocre In The Cut with Meg Ryan] because one of the actresses simply didn’t want to work with you?”

MR: “Yeah that is true and it was bewildering to me because this particular actress [Nicole Kidman, who was involved in the film at the time] had never ever met me before. So what she was scared of was what she had heard.”

MR: “I make that right by talking to someone…a doctor…a psychologist…about things. I got a new agent, a great young guy who told me right off that I had to accept his advice and work with him if he was to handle me and most importantly I have to make the absolute most of the opportunities I am getting…rebuild…you know.”

CH: “…so I am delighted to see you back doing some work again. I am wondering about the time you got very huge in – late eighties, early nineties…there are a bunch of really talented people from that time that just don’t really work much anymore… Eric Roberts…”

MR: “Oh man, Eric Roberts is one of the great actors ever man, I just worked with him a bit again on Spun – but he had some problems, health problems that have made it tough on him, but he is working again -”

CH: “What about Michael Cimino…”

MR: “Michael’s fucking crazy man, that is his problem, he is just fucking nuts.”

MR: “Yeah, I played a character named Nick Ray…that was actually a beautiful film – the French love it – but it was Michael man, he is such a fucking nut, you wanna talk about a guy who won’t play the Hollywood game…”

CH: “You also made Year of the Dragon and Desperate Hours, both decent movies, with him -”

MR: “I didn’t say he wasn’t a superb talent, he is, I said once to a reporter that if I had to only make movies with Cimino the rest of my life that would be fine, but then he just went right off the fucking rails man, a complete fucking nut now.”

CH: “I love your films Angel Heart and Johnny Handsome – I thought both were among the most overlooked movies of the 80s -”

CH: “Why didn’t audiences dig those movies when they came out?”

MR: “Ah, who the fuck knows about these things…although with Johnny Handsome Walter Hill [director] was trying to make several different movies, several different ideas and themes in one movie – I thought he pulled it off for the most part but it gave the movie this really uneven feel, but I loved the idea of making a noir crime thriller with a serious social message running right the fuck through it. Angel Heart…I don’t know, it seems that people seem to get it now more than they did then.”

CH: “Now that a new crop of filmmakers are seeking you out – what are you going to do differently now?”

MR: “Yeah, well, I have always been committed and I have always been professional…always…but before I never looked at all this shit as a business, I thought I could be an artist and just concentrate all my energy on being that – but that ain’t realistic, this is a business, a vile cutthroat fucking business that you have to keep your eye on all the time or you will get fucked over in a big way.”

CH: “I was talking to Johnny Depp recently and he told me what a big admirer he was of yours…”

MR: “Yeah Johnny, he is my brother…a great fucking guy and a guy who knows how to play this fucking Hollywood game…he does great work, he is a great actor, he does the Hollywood thing to support his movies and then he goes off and lives his life with his family. He knows how to do it… I wish I had his savy when I was coming up man.”

CH: “I’ll use the work ‘comeback’ because I can’t think of a better one – but was Francis Coppola a big part of that return for you -”

MR: “Comeback is a good word man, and yeah, Francis was great to me on Rainmaker – he had to really vouch big for me – the studio guys were telling him to get ‘someone like Mickey Rourke’ for the character of bruiser…Francis said to them, ‘but Mickey Rourke is still out there, still working, why not just get him?’ The studio was hesitant, Francis made it happen. Then it turned out that the stuff was working out so good that Francis actually added in several scenes for Bruiser after we started shooting. But now guys like Robert Rodriquez [who put Rourke in Once Upon a Time in Mexico at the suggestion of Johnny Depp] are wanting to work with me because they haven’t heard the stories about me, they are just taking a look at the work and making their decisions based on that. I appreciate that and won’t let them down.”

CH: “If you had to do it all over again would you quite working as an actor to box again?”

MR: “You know man, I never look backwards…I have always been an athlete – I boxed before I acted in Miami – I just wanted to give it a shot, test myself that way physically, while I still had time.”

CH: “A lot of people made fun of you during that time, saying that you sucked as a boxer – but you had, what, eleven fights and you lost only one -”

MR: “Thanks for pointing that out man, I actually didn’t lose any of them – I had one draw. But I got beaten up pretty good in some of the bouts, busted nose, broken and compressed cheekbone…I was also dealing with other stuff in my life, relationship stuff…I also had done a movie for a lot of money that I considered to be a complete sell out…you know what I am talking about?”

CH: “Was it Harley Davidson and the Marlboro Man? ”

CH: “Did that bother you, the fact that all your problems, you private life, was all up for public scrutiny?”

MR: “No, none of that stuff ever really bothered me because I asked for it – all actors seek it out – all this bullshit about stars bitching and moaning about not having any privacy is bullshit – pure fucking bullshit – while they are complaining about a lack of privacy they have an army of PR flunkies trying to get them on the cover of magazines and keep them on the talk show circuit. ”

CH: “What are you hoping for now?”

MR: “Man, all I am hoping for is to be able to work – I think my best work is still ahead of me – I think all that I have been through in the last several years have only made me a better, more interesting actor.”

Photo Courtesy: Once Upon a Time in Mexico – Sony Pictures.