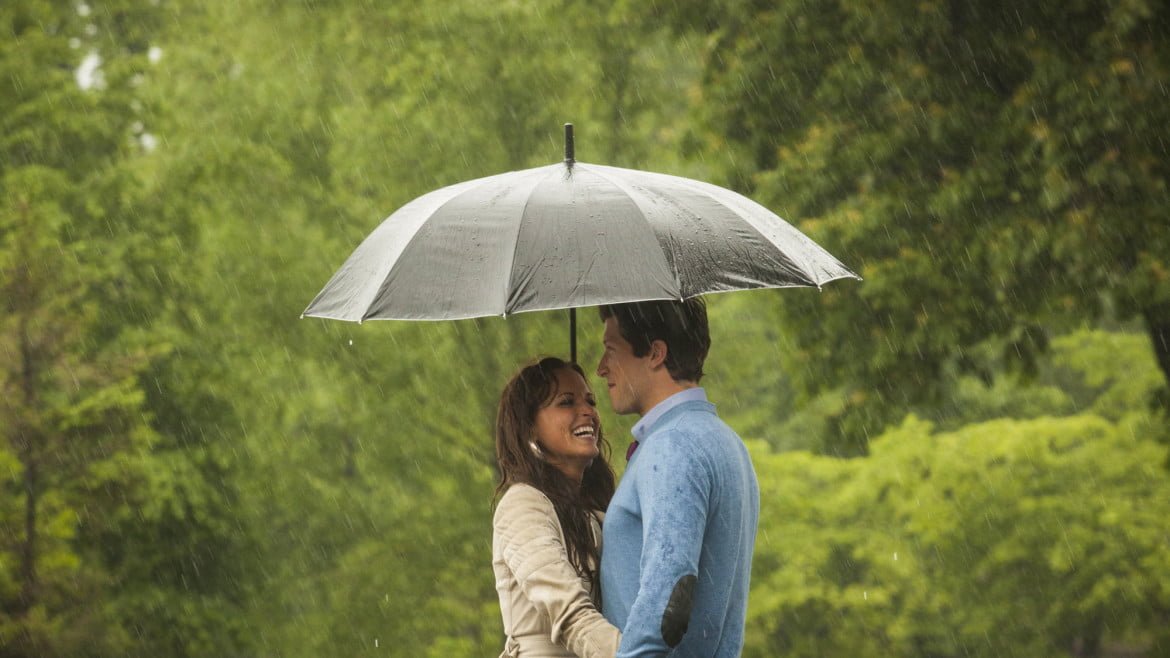 It’s week four on The Bachelor Canada; Brad’s t-shirts are getting tighter, the Vs are getting deeper and he’s that much closer to finding the girl of his dreams. Brad plans to send four women home instead of two this week and at this rate, we’re looking at a Halloween wedding folks.

First off, Ana, Kara, Gabrielle and Britany are selected for a picture-perfect group date. In a truly Canadian cost-saving initiative, the date involves Brad and the Bachelorettes posing for an eight-page spread in the November issue of Lou Lou magazine (on newsstands now guys!).

The Bachelorettes–90 percent of which are aspiring models–are over the moon about the date. Especially “server” Ana who seems to have no hang-ups on her photo shoot-worthy face–“let’s face it,” she says, “I deserve to model.” More down to earth Britany (who is actually a nurse and not a fame-obsessed wannabe) is feeling a little intimidated and insecure about the whole thing.

Back at the mansion, Laura B. and Bianka find out they’ll be heading off to the City of Love [also known as Paris] for a not-so-sexy ménage a trois where one of them will be eliminated. Whitney can’t even be bothered to hide her happiness at the news that she’ll be avoiding the nerve-wracking Parisian showdown.

But let’s forget all that for now because Brad is ready to get the party started over at the photo shoot. He starts off by cupping Gabrielle’s sequin clad behind in the back seat of a limo (for fashion) while she squints through a pound of purple/pink eye shadow that looks like it was applied by a blindfolded 12-year-old.

Once he’s finished making eyes at tranny-chic Gabrielle, Brad snuggles against Kara in cable knit for a cozy fireside scene for a brief 10 seconds. 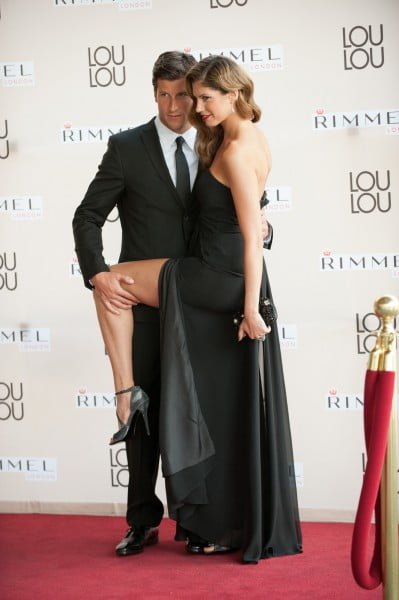 Next up, Brad and Ana do their best to channel an actually famous couple by posing stoically together on a red carpet in front of a Lou Lou sponsored step and repeat banner. Ana even manages to flash a little Angelina thigh and gives Brad another opportunity to do some more important photo shoot ass-grabbing. Unfortunately, there aren’t thousands screaming fans in the background but just a handful of confused guests from the nearby hotel.

Oh Canada, you so glamorous.

Poor, insecure Britany goes last and gets stuck posing uneasily on Brad’s lap in a one-person chair in the lobby of the hotel. Wearing an office-appropriate dress next and perched atop Brad in an elbow-patched grandpa cardigan, you can see why she might not feel that elegant. Brad wonders why Britany feels so uncomfortable and I wonder why they don’t let the poor girl get off his lap and let her sit on her own goddamn chair. Brad puts her at ease with his best Blue Steel impression and suddenly it’s all laughs and good times.

After the photo shoot (for Lou Lou… available at your local newsstand… remember guys… go buy it!), Brad takes the girls back up to his suite for another hotel party, SURPRISE SURPRISE. At the end of the night he decides not to hand out the date rose because he’s confused and not ready and needs more time… if that’s okay?

Not content to sit around and wait for her time with Brad, Whitney stretches out on the house chaise and develops a diabolical plan to visit Brad behind everyone else’s back. She slips into some running shoes and dashes out the back door with a “pretty good idea” of where she’s going. Luckily, it seems that Brad is staying at the Westin just at the end of the driveway.

Magically, Whitney also figures out his exact suite number with no help at all from the show’s producers because you know, this is “against the rules.” She forces her way into his living room and poor confused Brad wonders if he’s going to get in trouble. With whom Brad? With the producers who obviously gave Whitney a ride over here? Relax.

Brad rewards Whitney’s crazy behaviour romantic determination by opening up about his past. In a moment of legit sincerity, he discusses the trauma of losing his close friends and shows us that real men do cry. If you didn’t try to reach through your television screen to give him a virtual hug during this moment you’re probably dead inside.

Brad continues to pour his heart out while Whitney wipes away a non-existent tear and looks down to check that her well-financed breasts are still in place. They make out a little and Whitney, rather than offering any sort of consoling advice or support, threatens that she “better get that one-on-one date.” Such a sweet girl.

Cue the accordions because it’s time to jet off to Paris.

Brad shows that he’s really got the hang of this whole European fashion thing by pairing a baby blue grandpa cardigan with a silky maroon tie–très chic Brad! That’s okay though because Laura B. also appears stylistically challenged, rocking her cream coloured wide leg trousers during a heinous-looking Parisian monsoon.

Brad hasn’t planned a proper date (but we can be sure it involves going back to his hotel suite later) so the pair huddle under an umbrella and head off towards the Eiffel Tower for a few gratuitous postcard-worthy make out moments. Brad tells Laura B. that kissing under the landmark is good luck but she probably doesn’t need any convincing.

They decide to warm up with a café au lait but instead of stopping in at one of the city’s numerous cafes, they of course head back to Brad’s room.

Cut to Brad and Laura B. in robes (!!) having an intense discussion about her crying in the bathroom during a rose ceremony that happened like a million years ago. Apparently we’re still hanging on to this insignificant piece of drama because the good-girl Canadian Bachelorettes have been relatively tame this season.

Brads slips back into the grandpa cardi and heads off to meet Bianka. Come on now, if you’re going to go on dates with two different girls on the same day, at least have the decency to do a quick outfit change. Once again, Brad has not made any concrete plans so the two head off to walk in the rain and make out in front of another Parisian landmark.

The two stop for crepes (in a REAL restaurant) and Brad charms Bianka by communicating en francais with his Quebecois French, using complicated words like “Merci” and “Voila.” What a show off.

Brad tells his frowny-faced date that he “loves spending time with her,” which we all know is guy-code for “I’m maybe falling in love with you but not ready to tell you that quite yet.” Bianka validates his emotional confession by letting him know that she “wants to know these things” much like a manager wants to know about your Microsoft Word proficiency when interviewing you for a job.

Brad is forced to choose between the two brunette beauties and rather than taking them both out for a romantic carriage ride, he makes an early decision to give the rose to Bianka and say au revoir forever to Laura B. 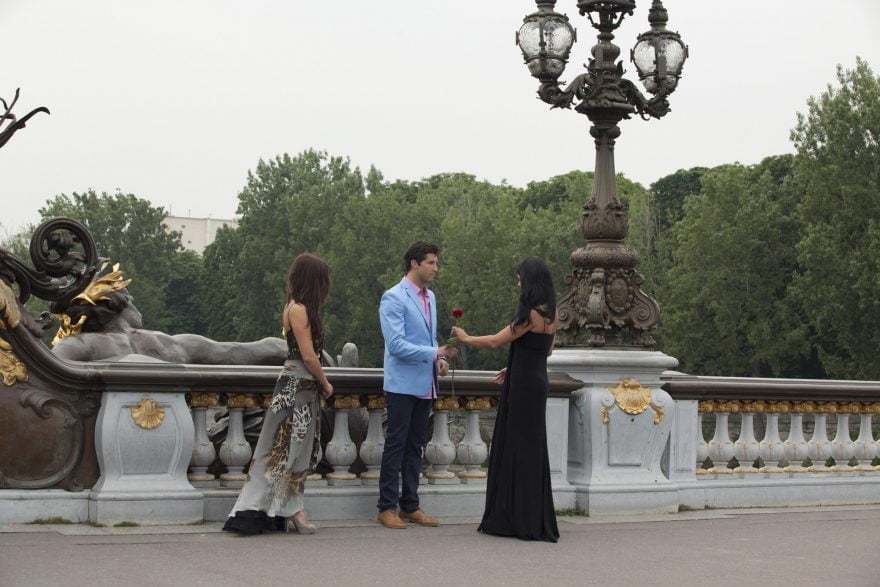 Laura B., Brad and Bianka

We leave the city of lights behind to jet off to the romantic destination of… Penticton? Whitney is chosen for the adventure-filled one-on-one (come ON!) and Chantelle feels a bit rejected but still super smiley.

Brad arrives–by helicopter, natch–and the couple head off on an action-filled afternoon involving Whitney descending a cliff face and Brad repelling down to rescue her. Good thing sporty Whit put on three push-up bras this morning!

This date is all about trust, just like in a relationship–see what they did there? Unfortunately, terrified Brad seems ready to throw up at any minute, which is how I’m feeling about Whitney’s unnecessary cleavage.

Amazingly, the couple don’t descend to their death and they wind up two feet on the ground and they celebrate conquering their fears with a well-deserved glass of wine. Brad convinces himself that robot Whitney is trying to express her feelings and offers her the second rose of the week.

Back at the mansion, a phone call comes in for Chantelle from her Dad back home. Screechy sweet Chantelle answers the phone (“hiiiiiiiiii dad!”) without realizing that phone calls from home during the filming of a reality TV show are almost certainly bad news. She learns her grandfather has passed away and we hear the eternally cheery Bachelorette use her normal decibel voice for the first time this season. Level-headed Chantelle gives a teary goodbye to Brad and the gals and leaves the mansion to be with her family.

With Laura B. and Chantelle gone and Whitney and Bianka secured with roses, Brad has to eliminate two more girls from the remaining four Bachelorettes.

Dressed appropriately in a dusty rose sweater vest, Brad distributes the remaining roses to Kara and… wait a minute… he needs a moment. The sweaty Bachelor wanders off leaving the ominous final rose behind. Host Tyler re-enters the room to ask the ladies to sit tight while Brad stares at their headshots in the backroom and attempts to determine who to send home. Finally, he returns and offers the final rose to Gabrielle (really?!), and says farewell to Ana and Britany.

Four Bachelorettes remain and next week Brad will be jetting off around the country for a whirlwind trip to meet the parents, or in Whitney’s case–the scientist who built her. 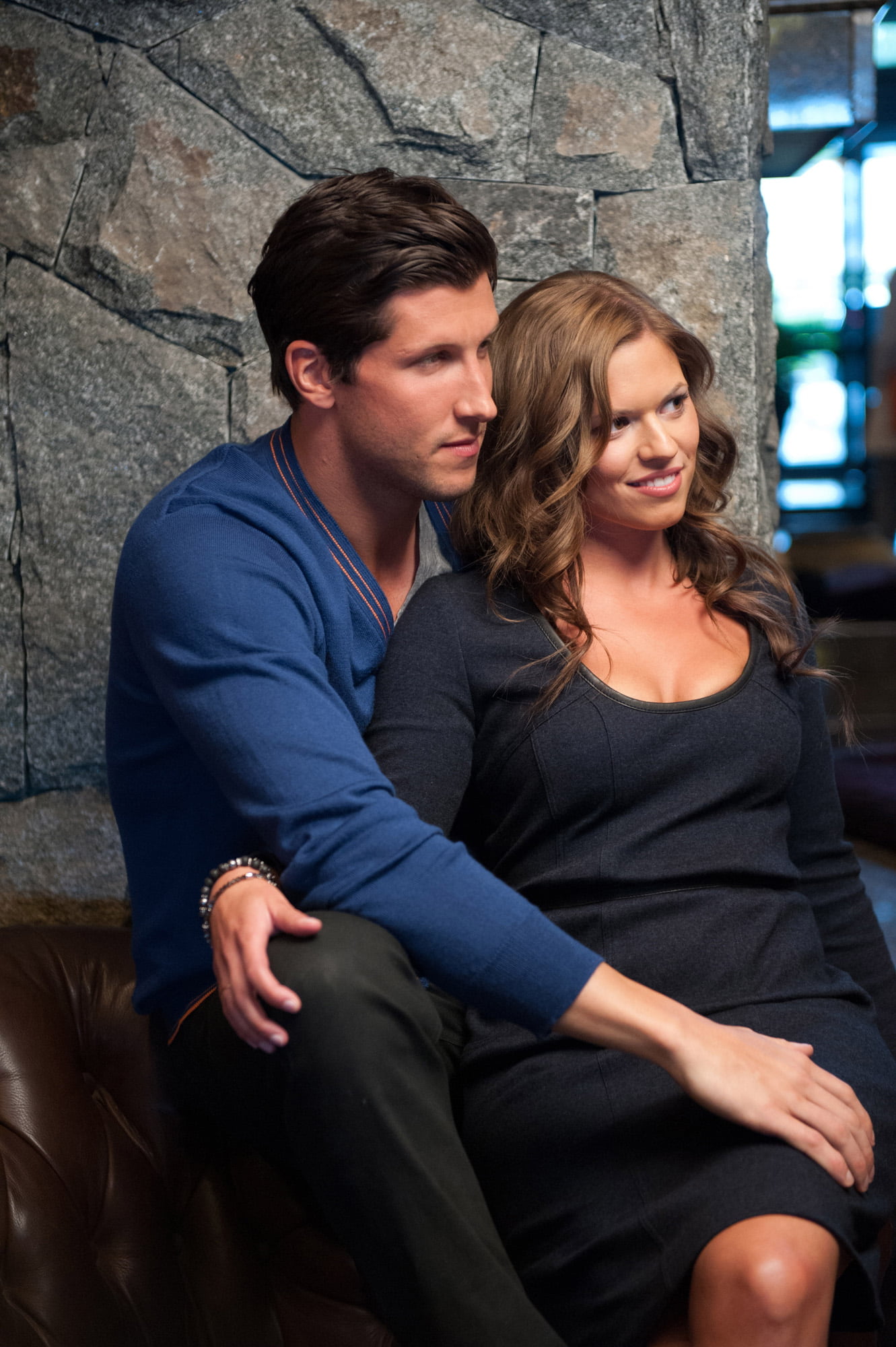 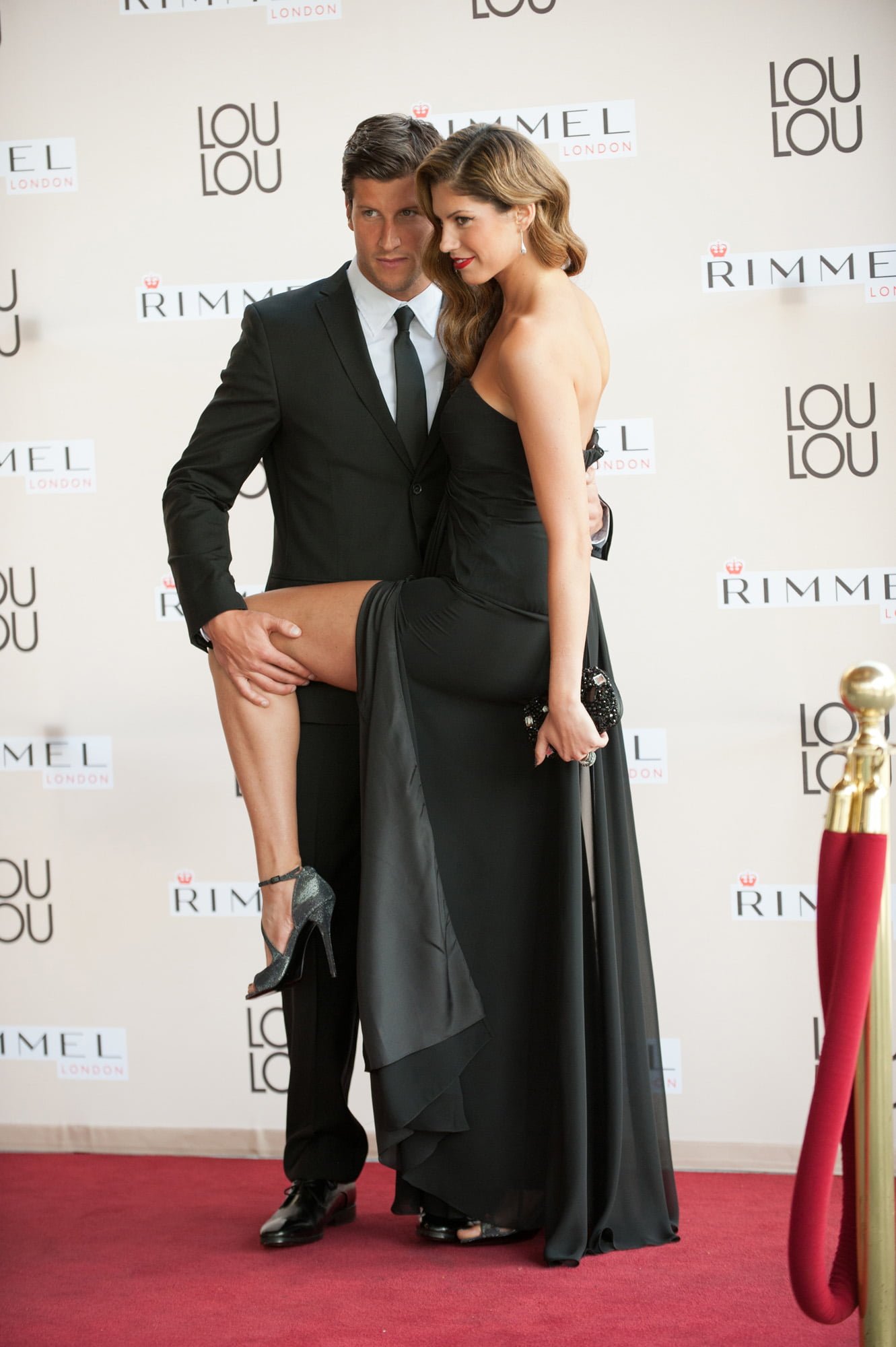 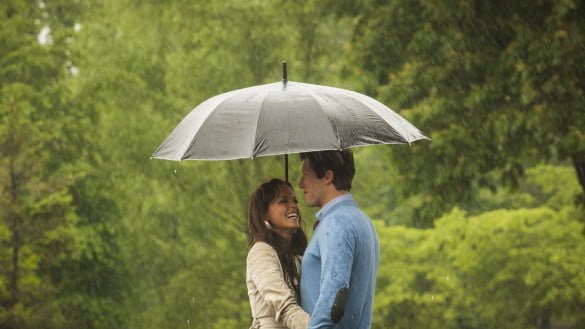 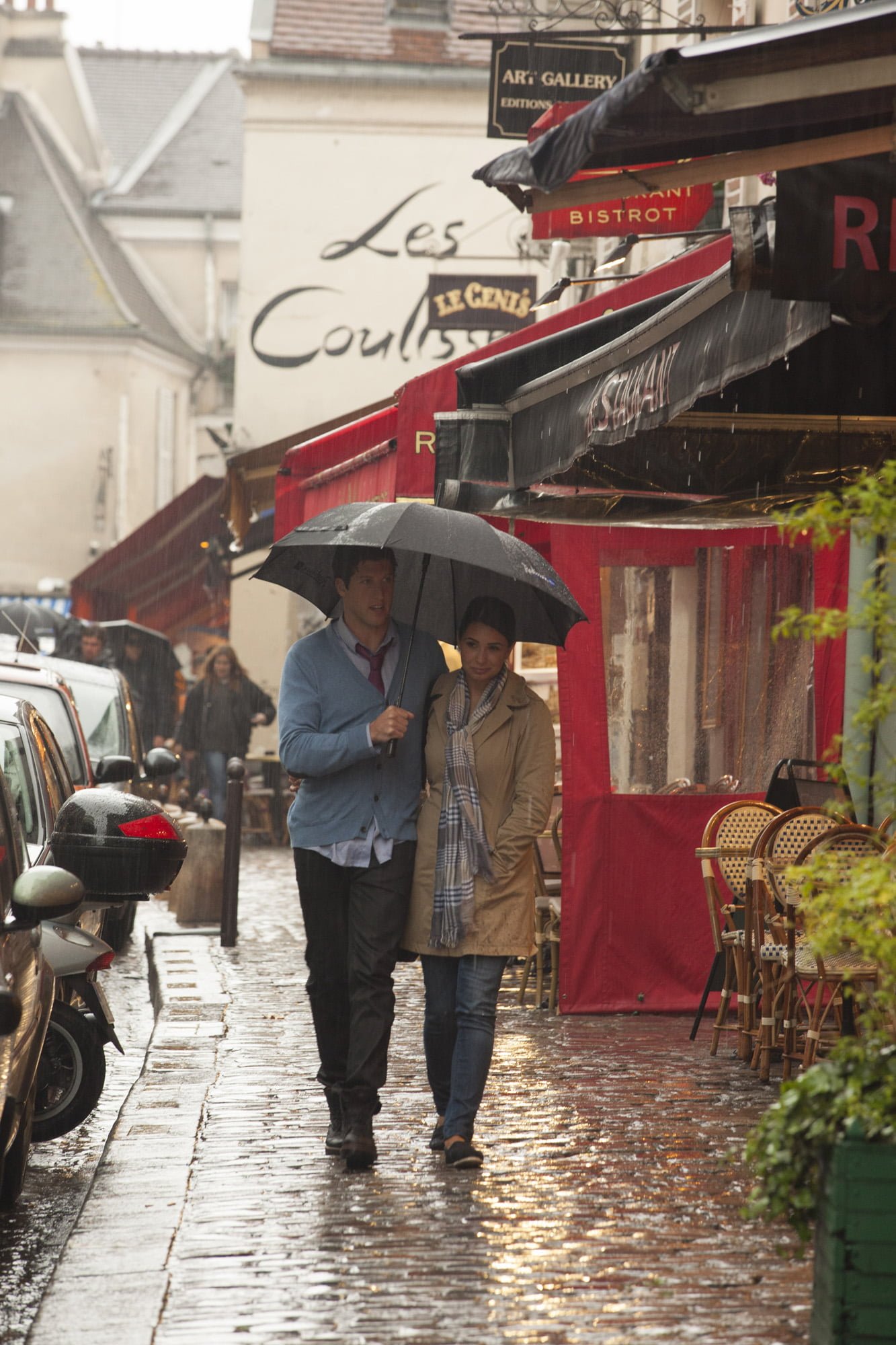 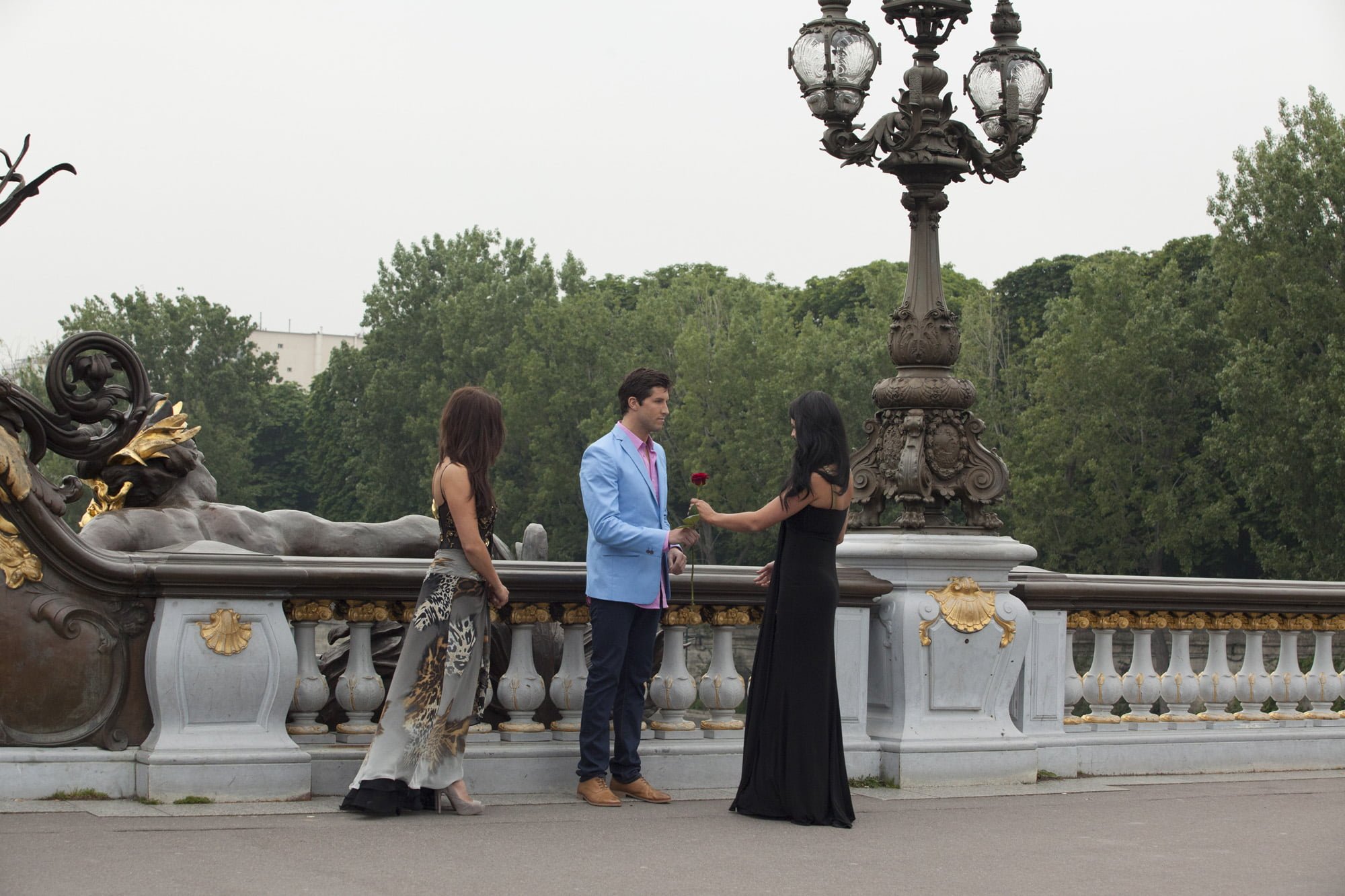 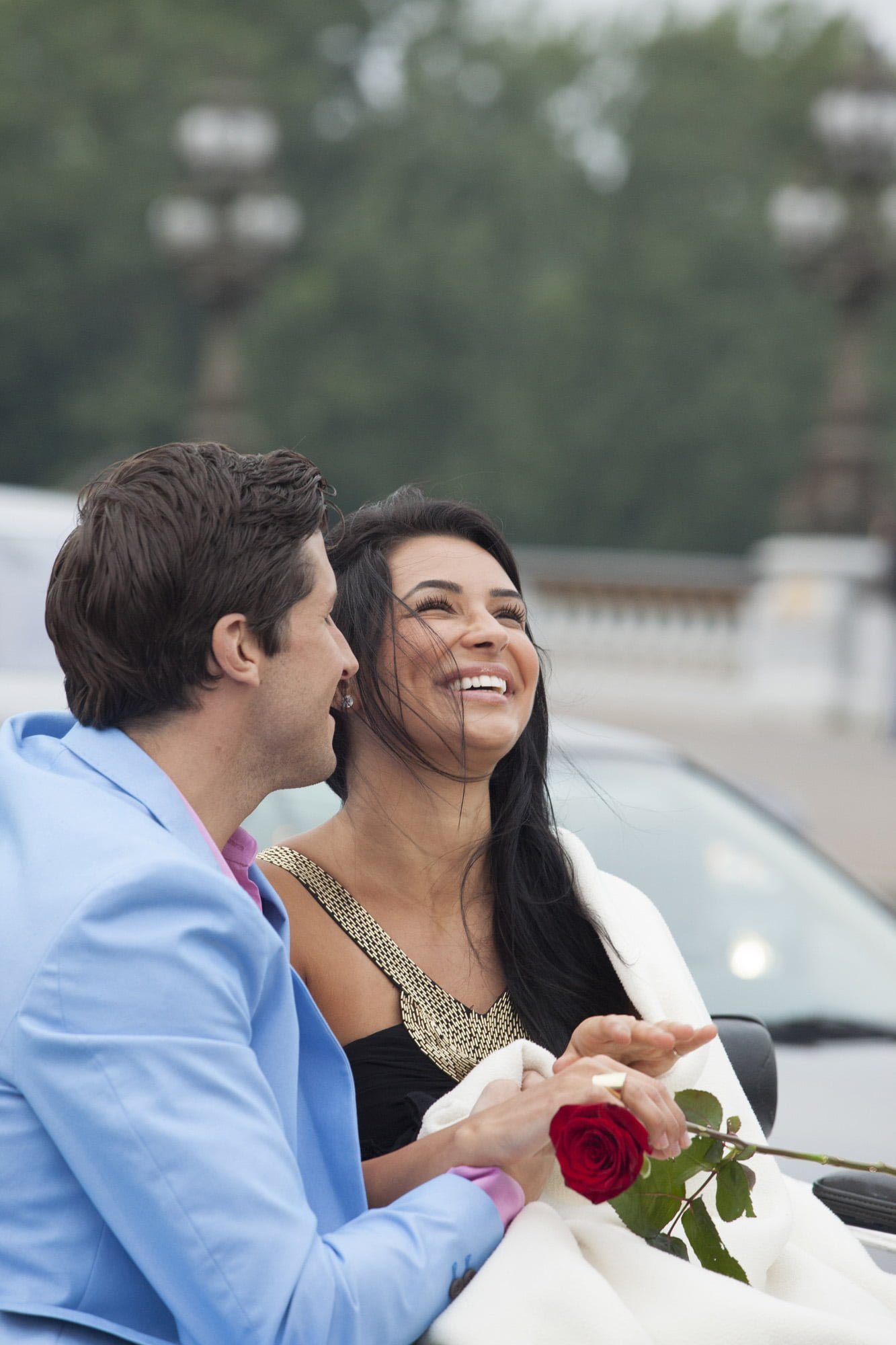 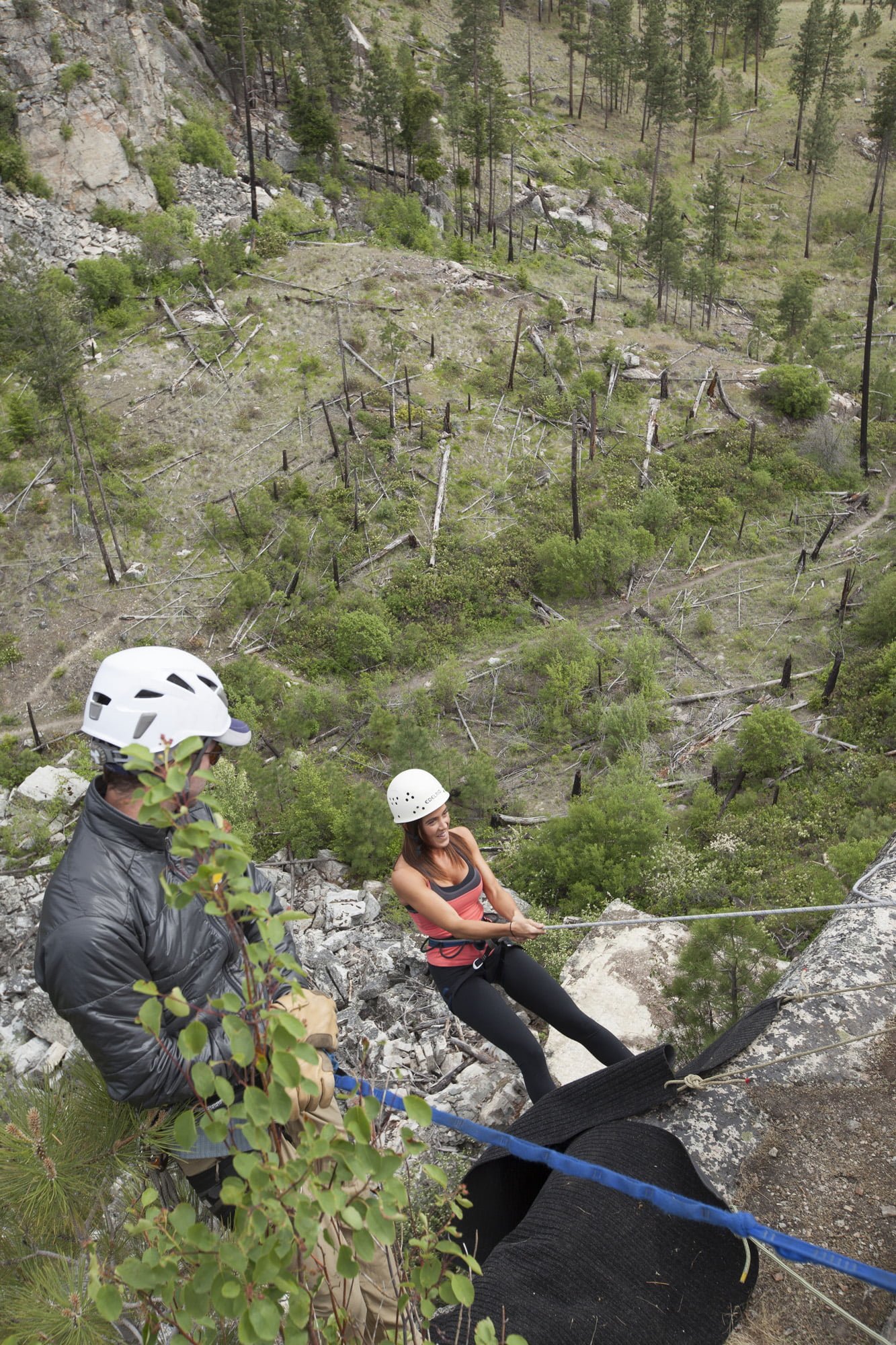 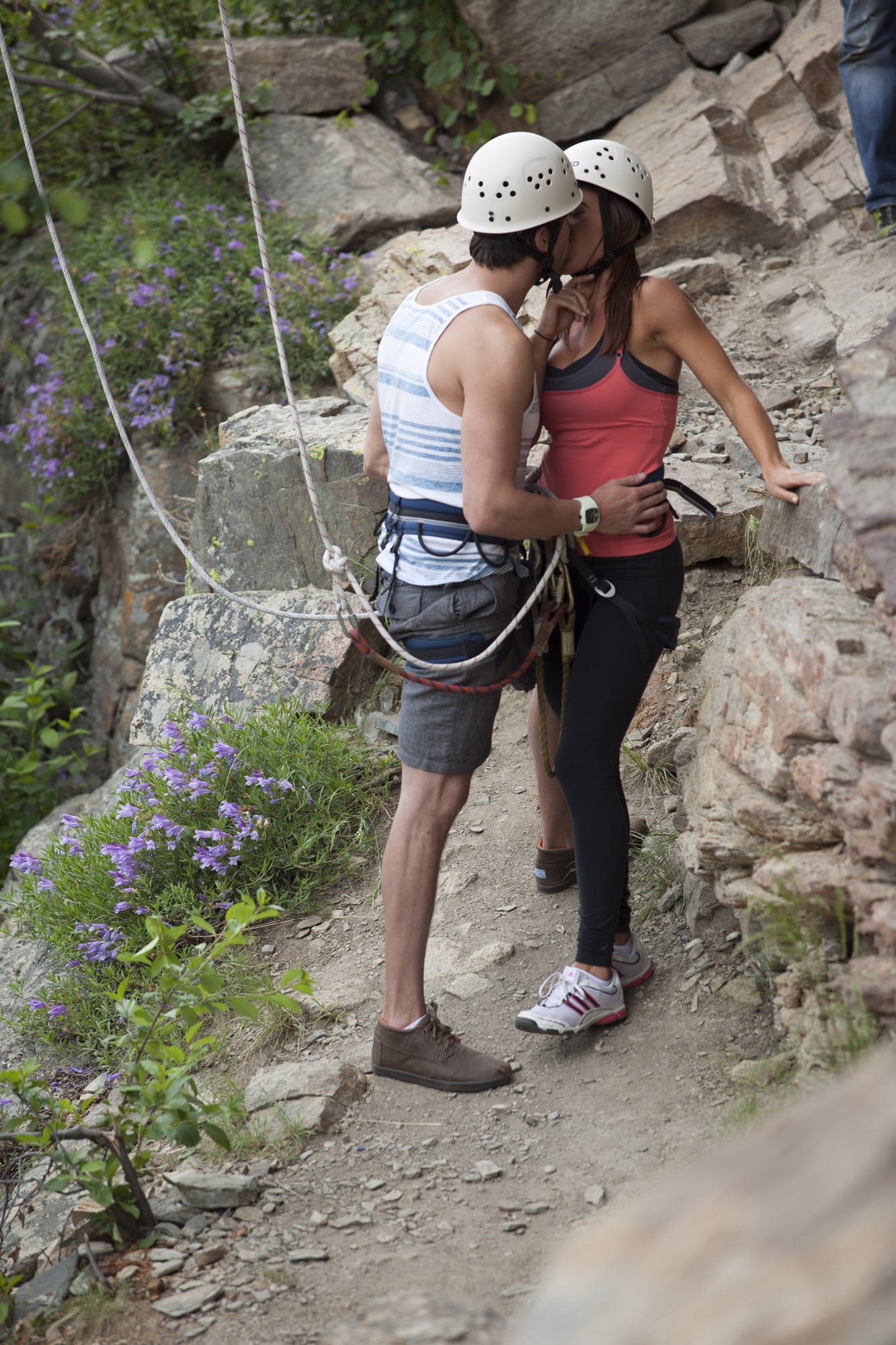 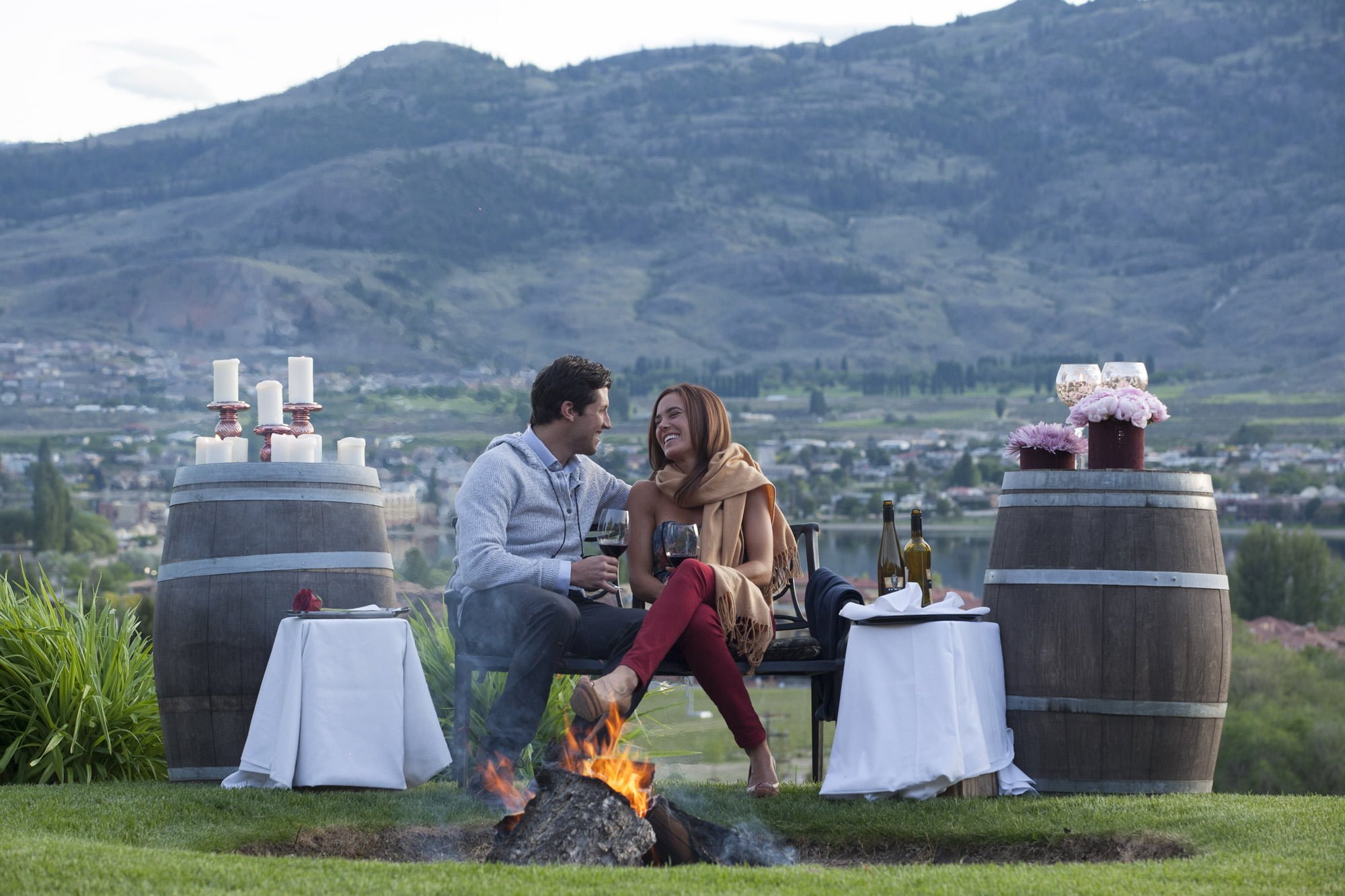 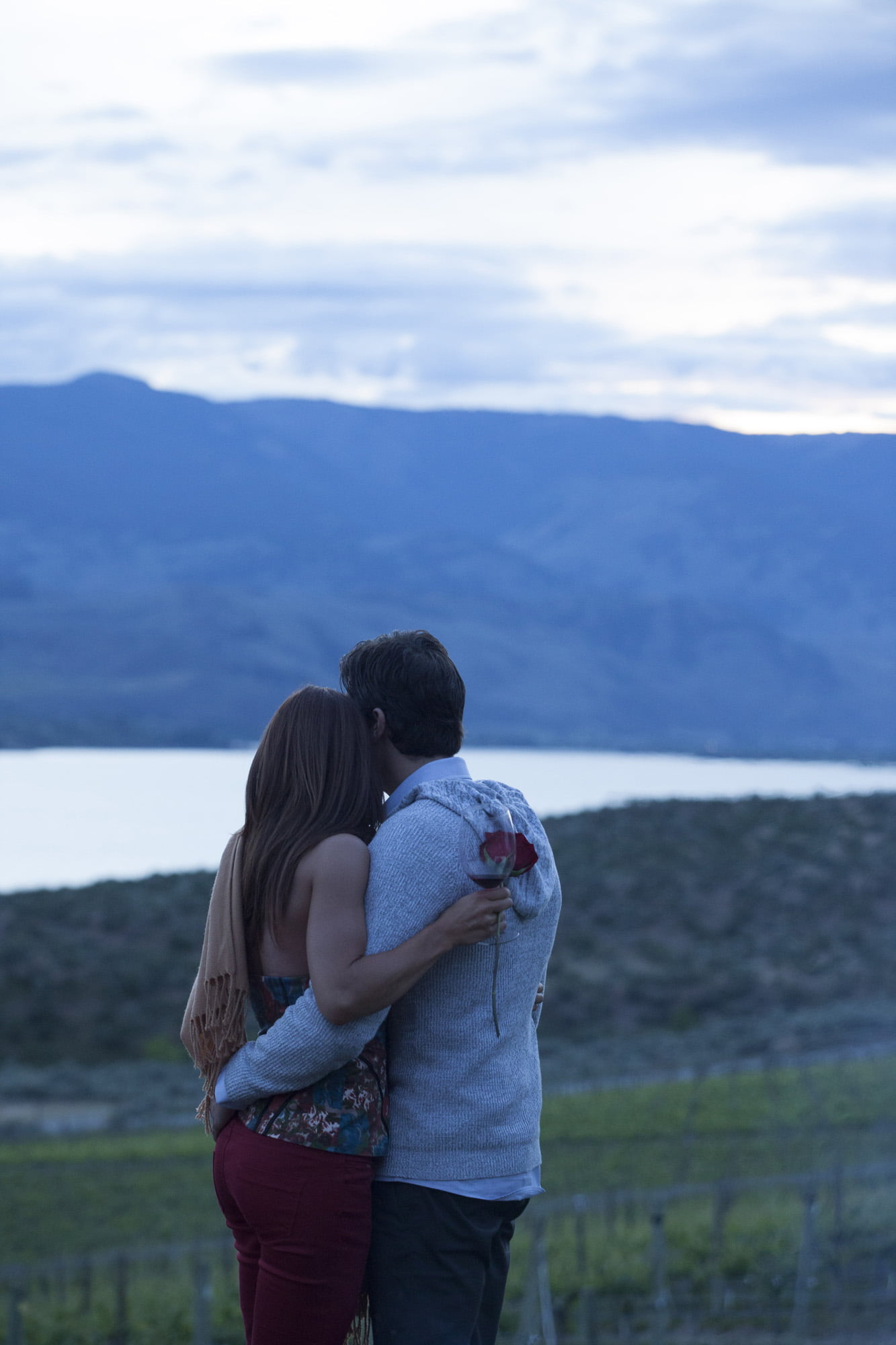 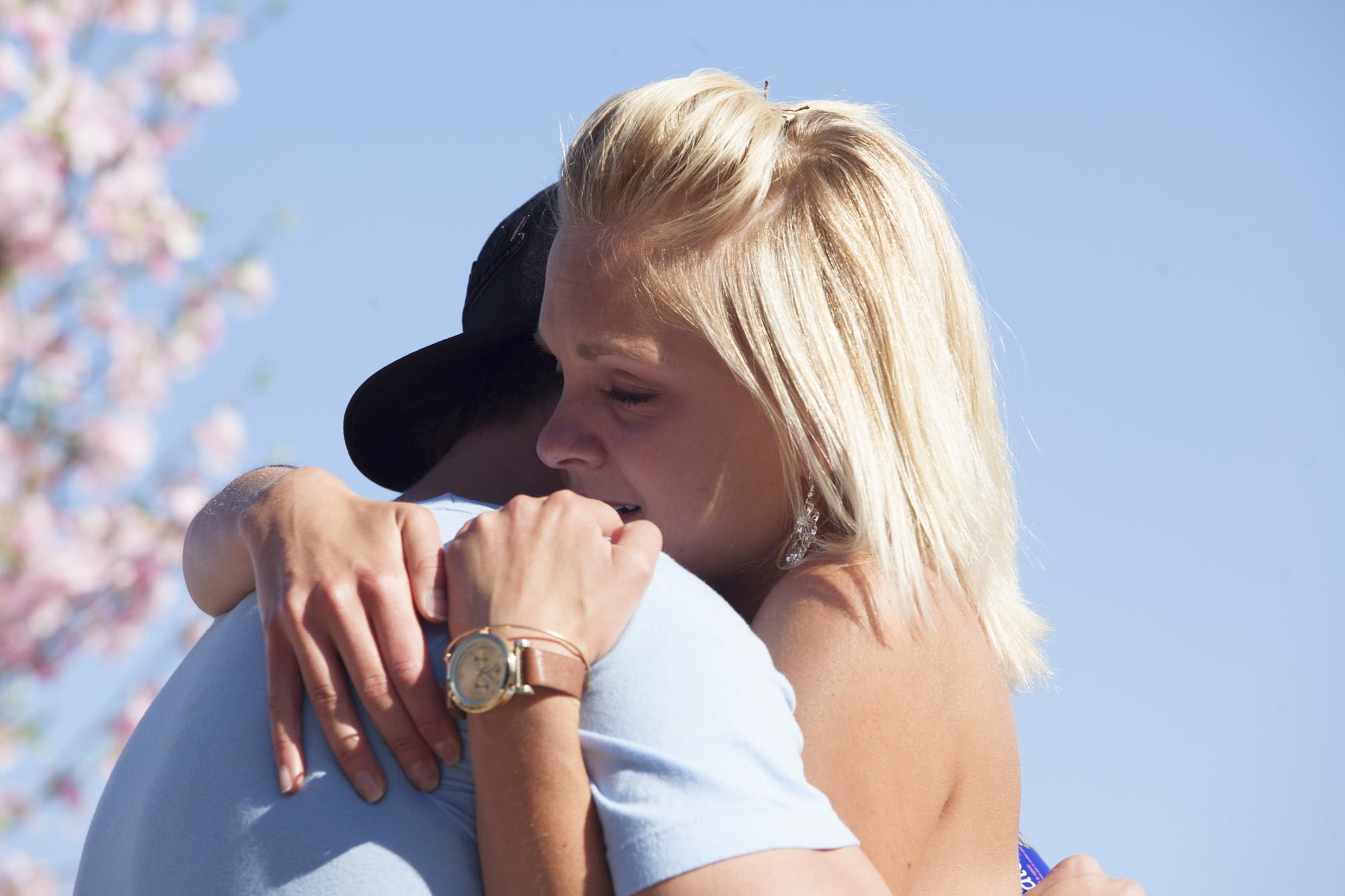 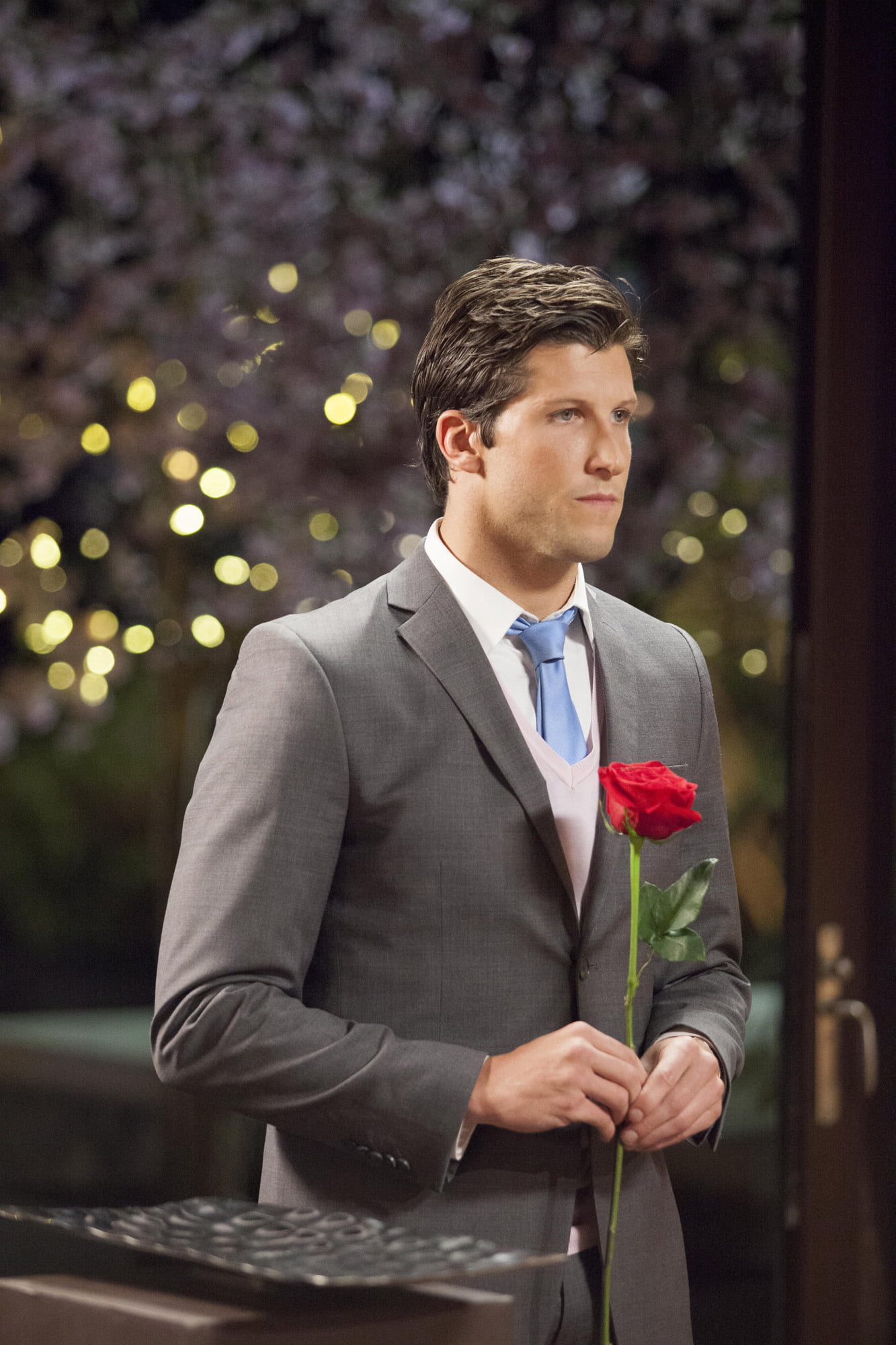 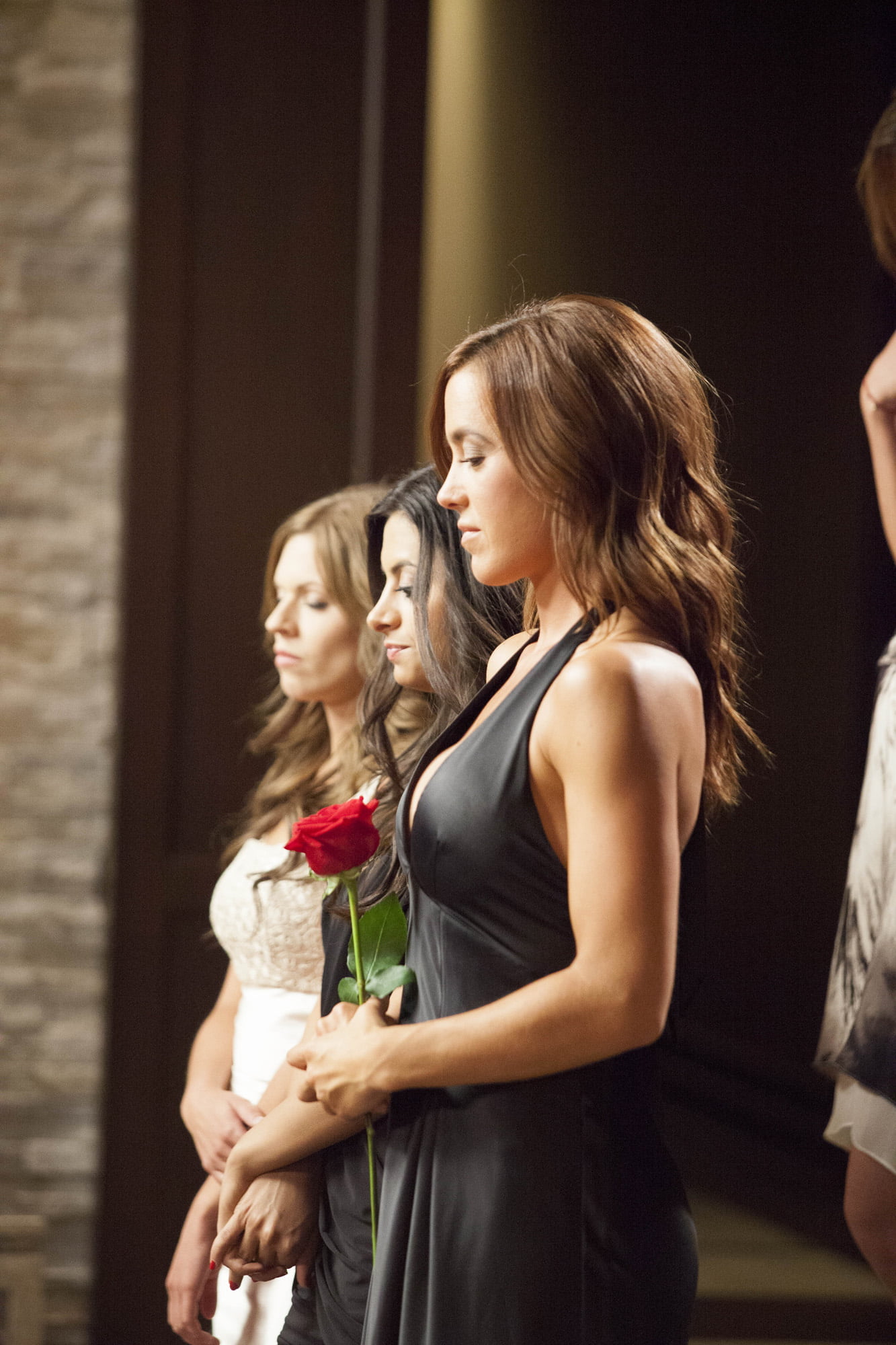