Time-travel adventures are all the rage on television these days. Timeless, 12 Monkeys, and Frequency effortlessly weave that sci-fi element into their storytelling narratives. Travelers recently joined the club with its own spin on the genre.

Travelers finds human survivors from hundreds of years in the future sending their consciousness back into host bodies in the 21st century. As these “travelers” assume the lives of random people, they strive to change events and alter mankind’s horrible fate. However, “Average Joes” such as social worker David Mailer, played by Patrick Gilmore, are blissfully unaware of the travelers or their mission–but that doesn’t last long. David cares for Marcy, a young disabled woman inhabited by a traveler and soon becomes sucked into her dangerous world.

Gilmore recently spoke with The GATE about his love of genre material, his character David, being an ordinary human in extraordinary circumstances and what sets Travelers apart from other time-travel television.

You had previously worked with showrunner Brad Wright on Stargate Universe. Was that your in for Travelers? How did the role come about?

Patrick Gilmore: “I was lucky enough to spend two years with Brad doing the final Stargate series. When you part ways, you say, ‘I’d love to work with you again. It was a good season.’ I remember Brad saying, ‘I’d love to work on something with you again.’ You hear that sometimes and go, ‘Ah, that’s kind of you,’ but you never put any stock in it. People have a lot of plans and a lot of good intentions. Brad was a man of his word. Six years later, there I was, and auditioning for this role that he told me, ‘I wrote this role for you, so no pressure.’ I was really lucky to have the confidence of Brad Wright. Here we are a full season later.”

You’ve done a lot of these genre projects. As a science-fiction fan, what spoke to you about the show’s premise?

Gilmore: “I’m a sucker for anything time travel. I don’t know if I consider myself a sci-fi fan, although I’m on board with all the very popular sci-fi vehicles like Star Wars and Star Trek. I’ve never gotten into Doctor Who. I think that if you are into Doctor Who, you are officially a sci-fi fan.”

“Time travel is something I have a weakness for, whether it’s Star Trek IV or Kate and Leopold with Meg Ryan and Hugh Jackman. That excites me. Not only that, but this is also done in a gritty, realistic way that lends itself to a little more believability. It raises the stakes when you can see yourself in that world. It’s definitely a TV show that’s rooted in that. You can see yourself existing in this world. It’s not superheroes and masks. It’s a really great character piece.” 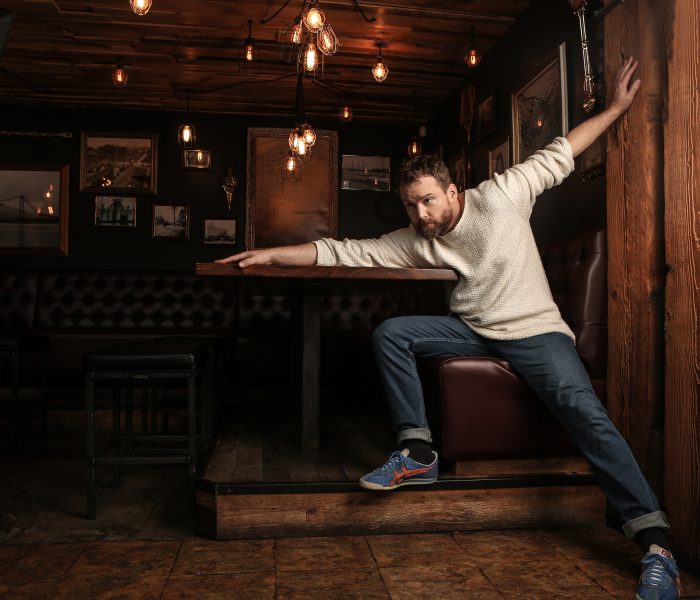 Introduce us to your character David and how he fits into the bigger picture.

Gilmore: “He’s a sweet guy, who had constructed a life around himself that causes the least amount of anxiety. Yet, when he happens upon a time traveler–who inhabits the body of somebody he knows–his life gets completely turned around. I think there’s a part of David that secretly likes the fact that his life has moved beyond the four walls of his cozy, little condo and his job. You will see more of that as the series progresses.”

“In the bigger picture, David is the eyes of the audience. He’s the guy going, ‘Wait a minute. How do we possibly know these things?’ All the questions we have as an audience, David actually gets to ask. The show itself is about second chances and trying to do the right thing. David, given that he’s a social worker, he wants to give people second chances, and that’s what the travelers are doing.”

What’s fun about the character stuck on the perimeter of the travelers’ secrets and is gradually drawn in?

Gilmore: “It gives the character somewhere to go. Regardless of how he reacts to information, he could be super into it. ‘Give me a gun. I want to be part of this adventure.’ Or, he could be, ‘This is too much. I can’t process it.’ You get to see a character start somewhere and end somewhere completely different. That’s the point of good storytelling. I’d love to grab a gun and storm buildings and change the world, but I see my world alter in a dark and realistic way.”

The travelers are obviously in this time period for a reason. In what ways do Marcy’s growing feelings for David complicate her mission?

Gilmore: “Marcy’s situation complicates not only the mission, but it complicates David’s life. Clearly, something has gone wrong with the transfer of consciousness to the body of Marcy. Marcy was a mentally-handicapped girl, who now has to hold the consciousness of this doctor from the future, in this body that is failing her. That’s going to play a huge role in the show going forward.”

Altering the past never ends well for anyone. What are some of the time-travel rules established in the series?

Gilmore: “There are protocols. The writers always had them written at their desk. All the actual travelers–the actors–they knew them off by heart. I never bothered to learn them because they don’t affect my character David. You get to learn them as the series goes on. You are not allowed to save a life that wasn’t intended to be saved on the mission. There are certain protocols to make sure they are doing the least amount of altering the future as possible. Of course, we need a little dramatic release, so a lot of those protocols will be broken.”

What else can you tease about David’s journey this season?

Gilmore: “Well, with David specifically, they’ve done something I really appreciate in writing that I think was exemplified in Breaking Bad, which is everything introduced has a consequence. We don’t brush away from things. One of the people David takes care of is no longer mentally handicapped. That gets noticed. That’s all I can say. Everything has a consequence. We’re not just throwing things out for entertainment value.”

Time-travels shows are cropping up all over the place these days. What sets Travelers apart from the distinguished competition?

Gilmore: “Let’s break it down. There’s Timeless. Frequency. 12 Monkeys. I have to lay all those shows out, including our own. They are all different. Timeless is very Marvel Universe. Frequency is based on that really good movie with a father/daughter relationship. This is something that isn’t being shown. It’s intense. It’s dark. There’s nothing flashy about it. My brother–who I’m always excited whenever he watches anything of mine because he never has time to–he actually texted me that he was watching Travelers. He kept saying, ‘This is very intense. This is so intense.’ That’s where we stand out. The stakes are really high and it’s dark and gritty and real. It’s created an atmosphere where you feel the characters are not safe. That’s exciting.”

[…] Link: Patrick Gilmore talks ordinary humans dealing with the extraordinary in ‘Travelers’ “Time travel is something I have a weakness for, whether it’s Star Trek IV or Kate and Leopold with Meg Ryan and Hugh Jackman. That excites me. Not only that, but this is also done in a gritty, realistic way that lends itself to a little more believability. It raises the stakes when you can see yourself in that world. It’s definitely a TV show that’s rooted in that. You can see yourself existing in this world. It’s not superheroes and masks. It’s a really great character piece.” Continue reading. […]