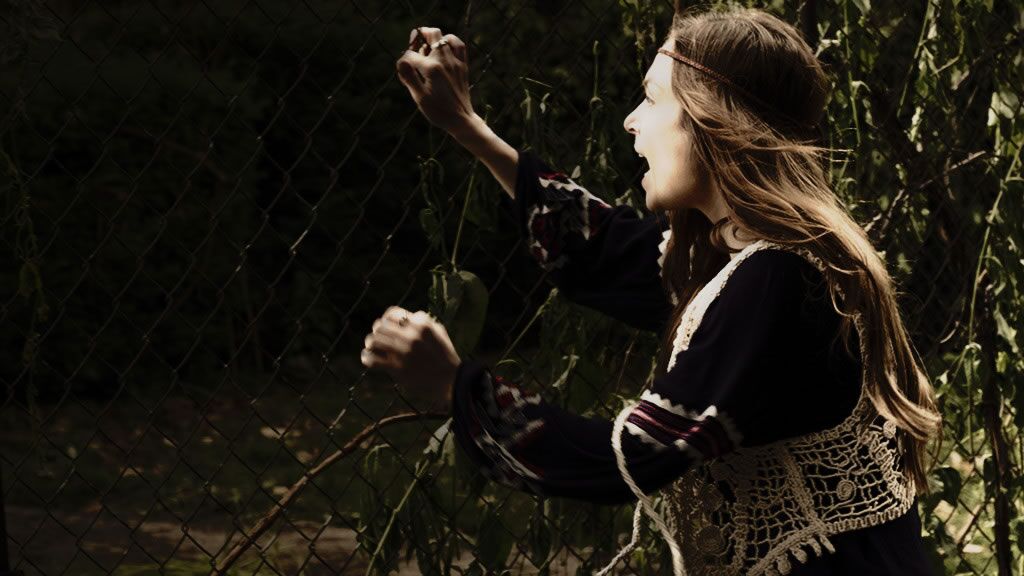 In 1986, three kids mysteriously died after knocking at the door of 59 Oakwood Lane. The case was never solved. The killer never locked away. The urban legend says that anyone who knocks on that door again will meet the same ghastly fate. On Halloween night, Grace (Wynonna Earp’s Dominique Provost-Chalkley) and her friends ignore that superstitious warning and instead, they knock knock, knock.

Premiering November 17 on Super Channel, all hell is breaking lose on the Hamilton set of NeverKnock. In a creepy, abandoned house, the NeverKnock ghoul is about to claim his next victim–or two. The contorting fiend slinks across an unconscious Grace and inches closer to her hysterical younger sister, Jenna (Mary Kills People’s Lola Flanery), whose hands are nailed to the wall. In defiance, she screams, “I am not afraid to die!” Then, it grabs Jenna and throws her into an adjoining room. Director Sheldon Wilson yells, “Cut.” The crew resets for multiple takes as the nightmare repeats over and over again. Whether Grace and Jenna live, or die, would be a massive spoiler.

During a break, Wilson and actress Provost-Chalkley spoke separately with The GATE about bringing the NeverKnock to life, shooting with practical effects, mastering the perfect scream and those gory deaths. 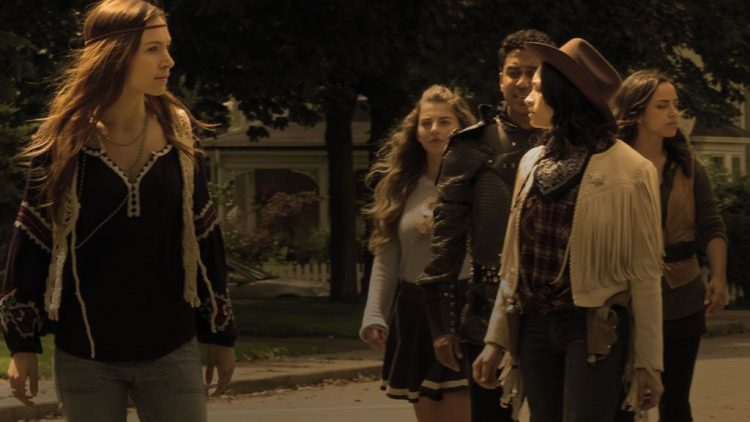 Haunted houses are a horror trope. Where did the inspiration for this particular spin stem from?

Sheldon Wilson: “Syfy wanted something for Halloween. Growing up, every neighbourhood has that house at the end of the street. Every community has one. They all have their stories. With Halloween, I just thought it would be interesting if there was one tied to a trick-or-treating, “Don’t knock on that door.” It just started from there. You let your imagination go wild from that point. The look of the NeverKnock came out of when I found Troy James, who plays the NeverKnock. He was amazing. I wasn’t sure what the NeverKnock looked like, but once I saw how Troy moved, the inspiration just came.”

A lot of these sinister spectres in your previous movies have been CGI monsters. What aesthetic were you aiming for by going practical this time around?

Wilson: “One of my favorite movies is John Carpenter’s The Thing. There are so many other visual effects in this film, I was like, ‘Maybe we can go with a prosthetic if I can find the right performer.’ It really hinges on that. If you don’t have the right guy or woman in the suit, it doesn’t make any sense. As soon as I saw what Troy can do–it’s when that audition video went up from him–literally, five minutes later, I booked Troy. Right away. I didn’t meet him. I was like, “That’s our guy.” Once he starts doing his bending, you can’t tell which way around he is. We were like, ‘Well, what if he had eyes over here. His nose is over there, and his spine is on the stomach.’ You can never figure the way he is supposed to be twisted around. That really informed what he looked like.”

How are you grounding the characters, so they aren’t simply fodder waiting to be killed off?

Wilson: “We always look for that, because it’s so fantastical with the NeverKnock and it being Halloween. We are really trying to build on that relationship between Grace and Jenna. They lost their mom in a car crash and fire a year earlier. Grace was in that car, so she was really traumatized. So, Grace is dealing with it one way, whereas Jenna is trying not to think about it and that it didn’t happen. The two sort of clash because they are dealing with the grief differently. That’s a theme that really runs throughout the movie. Then we have Amy, Gavin and Sydney, because Gavin and Sydney are a thing. But, Gavin is tired of being the trophy boyfriend and really likes the more-grounded Amy. These movies start fast, and you are on the run. So, wherever we can, we try and get some of that character stuff in there.”

Part of the sadistic fun of these movies is the way the characters are disposed of. How creative did you get?

Wilson: “It’s all based on fears, they die from their fears, so I made a list. I went to a phobia website and went through all the phobias. Some of them don’t work, like phobia of puppies. That’s not scary. I made a list and whittled that down. I’ve been pretty lucky on this one. Most of the fears stayed. One girl is afraid of snakes, so I found this amazing stunt actress who was cool with us putting snakes on her. We went through them all with everyone and tried to see what the actors were cool with doing. It’s a mix. I am trying to use as much real-world things as possible – Real bugs, real snakes, real dogs. For some shots, we are using CG. But, wherever I can, we are doing it practically.”

What appeals to you about the horror genre?

Provost-Chalkley: “To be completely honest with you, I am not a fan of horror. Firstly, when I was a child, I never watched a single horror movie in my entire life. Whereas, now, I don’t get scared because I can see it’s all made up and lots of trickery. However, they are cool to film because you really have to push yourself to extreme emotions. It’s good practice as an actress to be able to scream and cry at something that is completely imaginary, and access those emotions on demand. It’s like going to the gym.”

Tell us a little about your character Grace and how things spiral out of control?

Provost-Chalkley: “I play a girl named Grace. She is new to Autumn Grove, which is the town where this is based. She has just recently moved from the city in an attempt for her family to start a new life and overcome the grief of her mother, who passed away last year. Grace is new to the school and she’s starting to fit in. She goes out on Halloween with a group of friends and it all goes terribly wrong. ”

“The premise of the movie addresses individuals fears, the difference between different people’s fears and facing your fears and being haunted by your fears. Grace’s mother died in a car accident, but she was burned to death. During this movie, Grace must relive what that’s like, being close to fire, being burnt and all of those horrific things. Today, we had a little event with fire.”

What is it like working against a practical creature as opposed to a CGI creation?

Provost-Chalkley: “I love it. I’ve had experience with computer animation on Wynonna Earp and Avengers: Age of Ultron. There’s something very odd working with CGI and green screen. You are basically working to nothing. There’s a tennis ball in the distance and you have to pretend it’s a monster. It’s really tricky. Hats off to actors that work with CGI all the time. It looks amazing in the end, but people don’t realize what they’ve actually gone through to get to that result. So, it’s been a treat to have a physical creature. The way he moves is genuinely creepy, so at least we have that visual image to hold on, rather than everything happen in post.”

What is the secret to mastering a scream?

Provost-Chalkley: “I’ve always been very good at screaming. Because I trained in singing, back in the day, I’ve always been taught to use my voice in the right way, like use your voice from your diaphragm. Last night, we were doing night shoots, so I was up until 4 a.m. screaming on a front lawn, at the top of my voice, with everything I have. I feel fine today. My voice is absolutely fine. Whereas, some people do it one day and it’s over, and then have no voice the rest of the shoot. You have to be careful. The trick is using your diaphragm and being aware of it.”

There’s a formula to these types of movies. What are you hoping audiences will enjoy about NeverKnock?

Provost-Chalkley: “It will give you a good adrenaline rush. People will be able to sit back and enjoy a big bag of popcorn and have a bit of a scare. Sometimes you need that release of adrenaline and enjoy the escapism.”