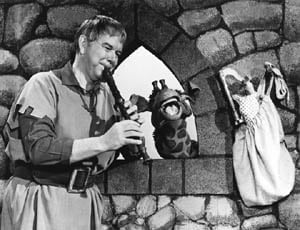 Here’s a few amusing stories I’ve run into over the last couple of days – had to share them, especially in the case of the first one.

Save The Puppets!
The Toronto Star has an article about the children of the late Bob Homme, better known as the Friendly Giant, who were cheesed off by the CBC when the original puppets of Rusty the Rooster and Jerome the Giraffe were used in a “distasteful” sketch for the 2007 Gemini Awards.

Alright, the skit is only kinda funny, but distasteful? Not exactly. I’d like to think that if Mr. Homme were alive today he would have seen the humour in the piece, and no one can say parody is a bad thing. Would they have felt any better if the CBC had used replicas? Would it really matter? God, get a sense of humour – I grew up on that show and it’s not like it changes how much I enjoyed it then.

Anyway, the kids have reclaimed the prized puppets from display at CBC headquarters and are planning to do something with them. My vote? I bet Puppets Who Kill could put them to good use.

Save Your Kids!
There’s a lot of talk right now about the fact that Unilever is really being kind of two-faced about their Dove ads that aim to portray natural beauty when in fact the company also owns Axe, which focuses on negative body images (i.e. thin babes and bouncing boobs). Rye Clifton has even posted a YouTube video that mixes the new Dove viral video with scenes from a number of Axe ads.

Now, why did it take so long for people to come up with this connection? When Dove launched their “Evolution” ad no one seemed to say a peep.

If we’re going to go off and talk about hypocrisy in corporate ownership, why is this the first thing we look at? What about other companies that sell fattening food with one arm and weight loss products with the other?

Plus, have you seen the Axe ads? Sure, they’re pretty sexist, but they’re also fun, fresh advertising in a landscape of dull messages, and if you’re turning to advertising to get an idea what you should look like, you probably have bigger issues to deal with than just your self-image.

Heck, I’ll even go so far as to applaud Unilever for one great thing: the ads tell parents to act like parents and speak to their kids about body image. Imagine that – parenting rather than blaming the world for your problems. I like it.

Save The World!
And finally, did you hear that Nintendo got a failing grade from Greenpeace for not having any green initiatives for the gadgets they sell? Greenpeace rated companies based on how much they did to keep their products from wrecking the planet, and apparently Nintendo came out at the very bottom, even below Mircrosoft, with a score of 0/10 (nobody scored above a high-7).

Nice to see people are actually starting to think more about their piles and piles of e-waste, and any report that sticks it to the Wii is fine by me (yep, I hate the system and their child-like gaming products).