The Cox Box: A Long Day’s Journey Into Cox 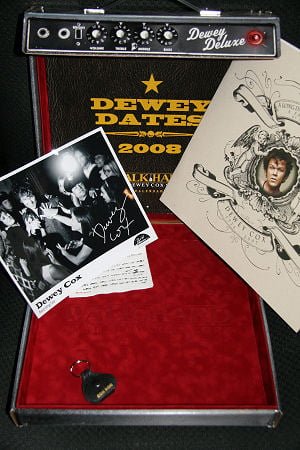 A lot of packages arrive on my doorstep, but I have to admit I wasn’t expecting The Cox Box. Columbia Pictures really went all out with this one, and it’s all to promote a little film called Walk Hard: The Dewey Cox Story.

The film opens next Friday, December 21 with John C. Reilly as the incomparable Dewey Cox – a country bumpkin who cuts his brother in half, falls into fame, and changes the world of music.

I really, really didn’t expect to like the movie, but I haven’t laughed so hard all year. Reilly is hilarious, and there is barely a scene in the film that doesn’t have some brilliantly raunchy joke, or spoof of some famed musician. It’s an utterly stupid film, but the music is actually really good, and I can’t believe how many cameos there are (Jewel!?).

Anyway, back to the Cox Box. There’s a napkin with scribbled notes for Dewey’s song “Walk Hard”, a leather guitar pick key chain, a calendar with all of his album covers, a signed photo, a book on Dewey’s musical career by Rolling Stone Contributing Editor David Wild, a t-shirt from his world tour, and an “album” that has a DVD and CD with video and musical highlights. Oh, and it comes in a box that looks like a guitar amp.

It’s… amazing. Stupid and amazing. And I can already hear people starting to quote the film.

My only complaint about the whole Dewey Cox promo? The “Cox Across America” concert tour didn’t come to Toronto! 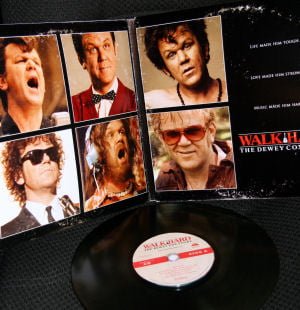 Check out the video for one of my all-time faves from the movie: “Let’s Duet”