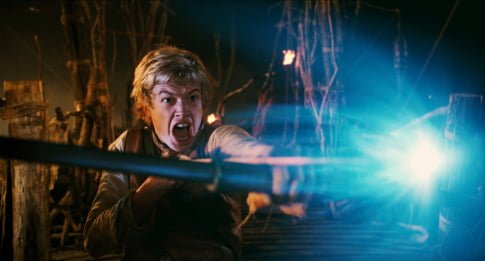 A month or so ago I picked up the novel Eragon by first time author Christopher Paolini (who was 17 or so when he wrote the book) and instantly loved the story. It wasn’t perfectly written, but it was compelling, and had a cool plot that worked in almost every way.

The story follows a young boy who discovers a dragon egg, that ends up changing his life as he becomes embroiled in a fight against the ruling power of the land. Kind of a common concept in the fantasy world, but done just a little bit differently. I had decided to read it when I discovered that it was going to be turned into a movie, and now I must say, I’m really glad I did.

AOL posted the exclusive trailer and after watching it I’m feeling way more than a bit nervous about how they’ve changed the story. And it’s really obvious how they’ve changed it… I mean, key characters who you hear about, but never see make an appearance, and stuff about the dragon, and the mark on Eragon’s hand… it all gets skewed and I wonder if it’s not going to wreck the film.

Looking at the filmmakers also made me nervous. First time director Stefen Fangmeier has done lots of visual effects work before, but can he direct? Scriptwriter Peter Buchman has written one other thing before – Jurassic Park III. And the cast is made up of some great actors, but these same actors have been known to chew the scenery in some bad films (i.e. Jeremy Irons and John Malkovich).

I’m wishing them all the best, but with all these notable issues, I’m worried. I appreciate changes to liven up a story, but don’t completely change the whole story around!